End-to-end games, edge-of-your-seat entertainment and several eye-catching results - as we all continue to settle in to another Premier League season along came a weekend boasting the highest number of goals per game in the competition's history.

The 21 goals scored on Saturday alone set a record for the most on a single day (featuring up to four matches) in the competition's history.

And just when the excitement appeared to be coming to an end, Leicester City's fourth and final goal against Burnley on Sunday also secured this weekend's round of games a place in the top 10 all-time highest scoring Premier League weekends. That's despite four teams not even kicking a ball.

The weekend of 19-20 September 2020 does, however, register as the highest average goals per game (featuring more than five games) in Premier League history, with its average of 4.88 eclipsing the 4.82 set in 1993.

Over a full round of fixtures, matchday 42 in 1993 has the highest average number of goals with a colossal 55 in 11 matches giving an average of five per game.

It's now over to Aston Villa, Sheffield United, Wolves and Manchester City to contribute the 11 goals required to equal that bit of history.

Tottenham ensured Saturday's feast would not be a one-off affair as they put Southampton to the sword at St Mary's on Sunday afternoon.

Specifically, it was the near-telepathic connection between forwards Son Heung-min and Harry Kane that proved decisive, as England captain Kane assisted all four of the South Korea international's goals before helping himself to one too.

It was already the first time a player had assisted another player's entire hat-trick since Thierry Henry helped Arsenal team-mate Freddie Ljungberg to one against Sunderland back in May 2003.

But the Tottenham pair went one better to seal their own bit of Premier League history.

As, with the briefest of glances, Kane picked out Son to slot in his fourth, it was the first time in the competition that one player has assisted another four times in a single game.

Kane also became the first English player - and the sixth overall - to assist four goals in a single Premier League game, despite having only assisted two league goals in the whole of last season.

It also means the Spurs pair have combined for more Premier League goals (24) than any other duo in the competition since Son's move to England in August 2015, with Sunday's haul taking them clear of Manchester City's Sergio Aguero and Kevin de Bruyne (20).

Not to be completely outdone, though, North London rivals Arsenal boast their own electric pairing in Alexandre Lacazette and Pierre-Emerick Aubameyang.

Since 3 February 2018, the Gunners' own deadly duo have now combined for 11 Premier League goals after Lacazette's thumping header in Saturday's defeat of West Ham - second to only Ryan Fraser and Callum Wilson (13) in that time.

The sweetest of starts for Toffees

Spurs fans will certainly be cheery following that performance, along with the return of Gareth Bale - but there will surely be no set of fans with a bigger grin on their face than Everton's.

Having thrashed West Brom 5-2 at Goodison Park on Saturday afternoon, Carlo Ancelotti's side ended the day top of the Premier League table for the first time in more than 13 years.

The Toffees faithful no longer need to dream of 17 August 2007.

Backed up by an exciting £54m midfield revamp featuring James Rodriguez, Allan and Abdoulaye Doucoure, it was Dominic Calvert-Lewin whose goals made the difference in the end as he became the first Everton player to score a top-flight hat-trick since Wayne Rooney in November 2017.

That win, accompanied by victory against potential top-four rivals Spurs, means it's also the first time in eight years Everton have registered back-to-back victories at the start of a Premier League campaign. 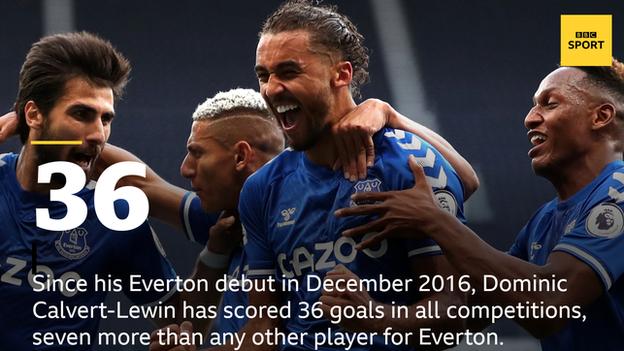 Quite the start, then. But why should it all end there? That's right, the last time the English top flight kicked off in September it was Everton who claimed the title - while Manchester United wound up in the bottom three.

There will undoubtedly have been another surge of optimism on Merseyside, then, when United later lost their opening home Premier League game for just the third time.

Warning signs for the promoted sides

Plenty of the fun so far has involved this season's promoted sides - though much of that has come at their expense.

Leeds have grabbed the headlines with two frenetic seven-goal games on their return to the top flight after a long 16-year wait, becoming the first English side to be involved in 14 goals in their opening two top-flight matches of a season since Wolves, 58 years ago.

While nobody expected Marcelo Bielsa's side to arrive quietly, that they are also the first side since 1980 to score three or more goals in their first two top-flight games following promotion has ensured many of us will be eagerly following Leeds' progress every step of the way this season.

Entertainment? Check. But at what cost?

The three promoted sides have conceded 22 goals between them after two rounds of fixtures. Though seven of those did arrive in Leeds and Fulham's basketball-like contest on Saturday, it's still a survival-hindering average of more than three per game.

After all three promoted clubs lost their opening match for the first time since the 2013-14 campaign, West Brom and play-off winners Fulham experienced defeat once more - with the aforementioned defeat by Everton the first time West Brom have let five slip since Sir Alex Ferguson's final match as Manchester United boss in 2013.

But, it's still early days and anything can happen. So where's all the hope?

Since the start of last season, Fulham's Aleksandar Mitrovic has scored more league goals (28) than any other player in England's top four tiers, while only Manchester City's De Bruyne has provided more league assists (20) in the English football league than West Brom's Matheus Pereira (17). There you go.