Jordan Jones can be a "big help" to Rangers, says manager Steven Gerrard, after the winger impressed in a resounding victory over Motherwell.

Jones scored his first goal for the Ibrox club as Gerrard's men put the hosts to the sword to maintain their unbeaten Scottish Premiership start.

Doubles for both James Tavernier and Cedric Itten completed the rout.

"I had a feeling Jordan was going to play well," said Gerrard.

"That's the Jordan Jones I want to see and I won't accept anything less than that because those are his attributes, and if he brings that to the table he's going to be a big help to us."

Fireworks could be heard going off outside Fir Park at kick-off, and it almost sparked the perfect start for the visitors as Trevor Carson had to produce a stunning stop to keep out a glancing Alfredo Morelos header inside the first minute.

However, the away side did not have to wait much longer to get the opener they deserved, as Bevis Mugabi's handball in the box allowed Tavernier to convert from the spot.

Motherwell responded with a penalty claim of their own when Allan Campbell was bundled over by Glen Kamara, but referee Bobby Madden did not see enough in it.

The home side's sloppiness in possession prevented them from creating too much, and it was the visitors instead who grabbed the next goal as neat build-up play from Morelos, followed by a perfectly weighted pass from Scott Arfield, sent Jones in behind Ricki Lamie and he finished the move off superbly for his first Rangers goal.

Rangers then took further control as Motherwell were penalised for yet another handball in the box, this time by Liam Grimshaw, and Tavernier again slotted home to take his tally to six for the season.

Robinson changed his team's shape at half-time in a bid to get back into the game, but they passed up a glaring chance as Mugabi powered a close-range header over the bar.

Tavernier then tried his luck from two free-kicks before Itten, like Jones, opened his Rangers account with a stunning strike from the edge of the area.

At the other end, Mark O'Hara's free-kick was acrobatically tipped on to the bar by Allan McGregor, before Itten tapped home his second following a Tavernier corner.

However, the away side were unable to keep an eighth clean sheet in nine league games, as Edmundson turned the ball into his own net from a Sherwin Seedorf corner.

Rangers then had the chance to restore their five-goal advantage as Jermain Defoe saw a sight of goal, but his close-range strike was gathered well by Carson.

Man of the match - James Tavernier

Robinson's men laboured throughout, which perhaps could have been expected given their efforts in Israel on Thursday, but the Northern Irishman must be perplexed at how many goals his side are conceding from penalties. Of the 19 goals the Lanarkshire side have let in this season, eight have come from the spot.

As for Rangers, after dropping points away to Hibernian last weekend it was important Gerrard's side responded and they did that emphatically. However, what will surely please the Ibrox boss most is the players he brought into the side flourished. Calvin Bassey impressed at left-back, Jones was a constant threat and Itten got off the mark. If Gerrard can trust his squad players as much as his regular starters, it can only bode well as their schedule shows no signs of slowing down. 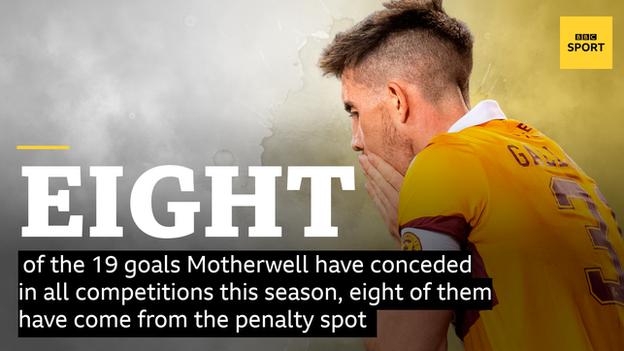 Motherwell manager Stephen Robinson: "We looked tired in everything we did and after we went 1-0 down we looked as if we had that excuse.

"We didn't do the basic stuff right. It was very disappointing.

"I stick up for everyone when I possibly can but that was flat all round."

Rangers manager Steven Gerrard told Sky Sports: "I thought we were strong throughout. I'm pleased for Cedric to get a couple of goals, it'll do his confidence the world of good. Calvin's debut - there's a lot of positives to take away from the game.

"I was pleased with my leaders today because they kept the standards up throughout the 90 minutes. I'm a bit disappointed with the set-piece goal, we'll have a look at that, but in the main it was a very strong performance."

Rangers welcome Galatasaray to Ibrox on Thursday (19:45 BST) in the Europa League play-offs as Motherwell travel to Kilmarnock the following evening (19:45).

Shots on Target
Home1
Away9