Following the blockbuster arrival of United States icon Alex Morgan at Tottenham Hotspur, a frenetic Women's Super League transfer window came to an end after a summer which saw many of the world's best players sign for English clubs.

Five of the USA's World Cup winners have joined the league, while five of the top 10 players listed in the Guardian's '100 best female footballers in the world 2019' now play in the WSL, with Lucy Bronze, Pernille Harder and Rose Lavelle joining Sam Kerr and Vivianne Miedema, who were already in England.

This summer's deals have brought more global attention on the league than it has seen since it began in 2011, but which star signing will prove to be the best piece of business?

England right-back Bronze has returned to Manchester City after three years with French giants Lyon, with whom she won three consecutive European titles.

The 28-year-old was voted as the BBC's Women's Footballer of the Year in 2020 for the second time, after helping the Lionesses reach the semi-finals of the past three major international tournaments. 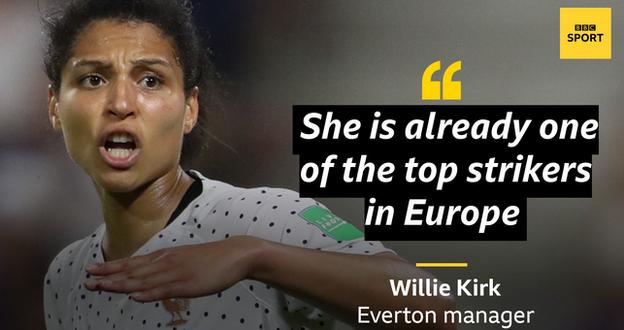 She promptly scored on her debut for the Toffees in their season-opening 4-0 win away at Bristol City.

The former Manchester United captain, 27, has joined their local rivals having also previously played for Everton, Liverpool and Notts County and spent one year with the dominant French side.

Widely seen as one of the best players in Europe, Harder completed a move from Wolfsburg to Chelsea on 1 September for a transfer fee understood to be in excess of £250,000.

The Denmark captain, 27, had helped the German side reach August's Women's Champions League final, after being named as the German Women's Footballer of the Year.

A two-time World Cup winner, the United States' Tobin Heath also won gold medals at the 2008 and 2012 Olympics, and is one of two USA stars to join Manchester United alongside fellow forward Christen Press.

Having previously played for Portland Thorns for seven years, Heath has been named in the NWSL's Best XI in three different seasons.

Lavelle was one of the stars of 2019's World Cup, tormenting England's defence early on in the semi-finals and then scoring the United States' second goal in their victory over the Netherlands in the final.

In her 45 caps for her country so far, the 25-year-old has scored 12 times and provided seven assists.

Alongside her fellow United States midfielder Lavelle, Sam Mewis joined Manchester City this summer and was the first of the five world champions to be announced as a WSL player during the window.

A back-to-back World Cup winner and 2012 Olympic gold medal winner, Alex Morgan is a footballing icon in the United States, for whom she scored six times in 2019's World Cup in France.

The 31-year-old, who gave birth to her daughter on 7 May, has 9.1 million Instagram followers - more than Spurs' official account or the royal family's - and has obtained major endorsement deals over the years from brands including Nike, Coca-Cola and McDonalds.

Known for scoring brilliant goals - and plenty of them - Manchester United's second USA forward Press will be familiar to England fans.

The 31-year-old scored the opening goal as the USA beat the Lionesses 2-1 in last summer's World Cup semi-final.

What about the Six Matildas?

The summer window also saw no less than six members of the Australia national team - known as the Matildas - moving to England, joining other international team-mates including Chelsea's Kerr, Everton's Hayley Raso and Bristol City's Chloe Logarzo, who all arrived last winter.

Manchester United's summer business also included moves for England forward Alessia Russo and Lionesses midfielder Lucy Staniforth, in a window unlike any the WSL has seen before.