Northern Ireland women's manager Kenny Shiels has introduced three new players to his squad for next week's Euro qualifier away to the Faroe Islands.

They are three of several changes to the 20-strong squad for the match in Torshavn on 18 September.

The former Linfield forward, who has made a strong start to the Women's Premiership season after making the move during the summer, has not featured for NI since a match against the Netherlands in 2018.

Also included again is goalkeeper Lauren Perry, who recently signed for Scottish side Forfar Farmington. She has not played in the senior side since damaging her ACL in 2018.

"There were a lot of marginal decisions to make and we are taking a very strong squad," said Shiels.

"The players in the Premiership have stepped up. It is important that they keep getting the right messages and keep improving.

"I feel that we had a fantastic momentum and then had to restart again, but I feel now that the players have achieved that. The feel-good factor is there and we are going to take that into the next game."

Northern Ireland are fourth in qualifying Group C after picking up two points from their opening four games and are away to Belarus on 27 October facing the Faroese.

They then play two home matches - Belarus on 27 November and the Faroe Islands on 1 December - to complete their qualification campaign.

A win in all four of their remaining games would give NI a chance of competing for a place at Women's Euro 2022 finals, which are being staged in England.

Nine group winners, plus three runners-up with the best records, will automatically qualify, while the other six runners-up will play off for the remaining three berths in the 16-team finals. 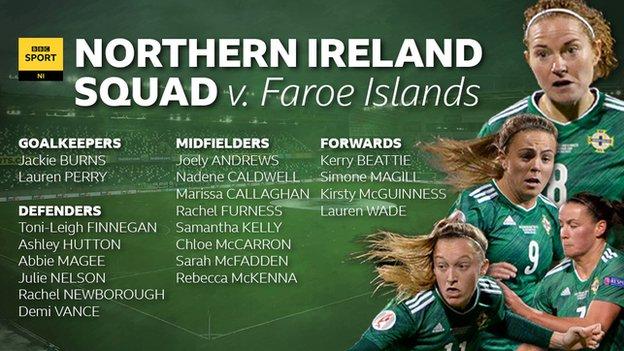