England get their Nations League campaign under way against Iceland on Saturday - with a few new faces in Gareth Southgate's squad.

We asked you to pick your side, and there were a few surprise choices. Here it is: 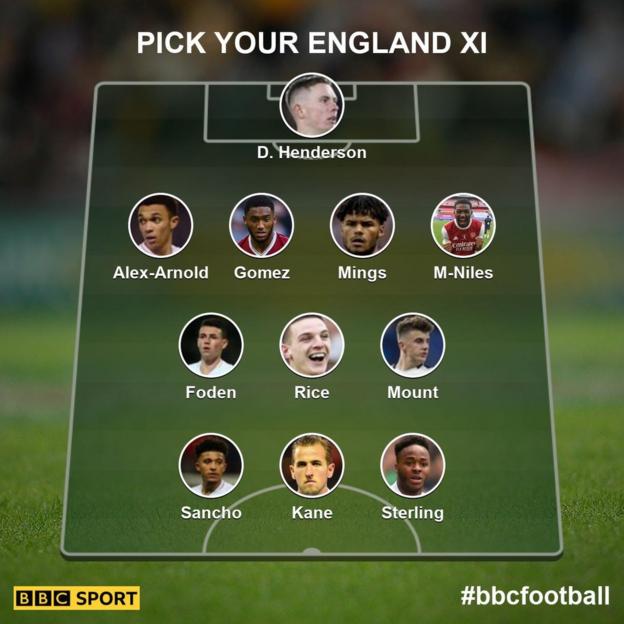 In goal you went for Manchester United's Dean Henderson to make his debut - though he only pipped Burnley's Nick Pope by a small amount. Jordan Pickford, the most experienced goalkeeper in the squad, got just 9% of your selections.

In defence Arsenal's Ainsley Maitland-Niles was chosen at left-back - which seems odd, but then again Gareth Southgate didn't actually pick one in his squad. Maitland-Niles has played on the left wing for the Gunners, and as a wing-back, so got the nod for a debut.

In the centre of defence you went for Joe Gomez of Liverpool and Aston Villa's Tyrone Mings, and nearly 73% of you picked Trent Alexander-Arnold at right-back. The Liverpool man was the most picked player of all.

Manchester City's Phil Foden, another debutant, was the most-picked midfielder, with Declan Rice of West Ham and Chelsea's Mason Mount just keeping Jack Grealish out of the side.

The front three was straightforward - Raheem Sterling, Jadon Sancho and Harry Kane were the second, third and fourth-most picked players overall. Mason Greenwood, another potential debutant, was the closest to forcing his way in.

You can still pick your XI and share it with friends on social media using #bbcfootball.

Choose your first-choice England XI for the upcoming games and share it with your friends.