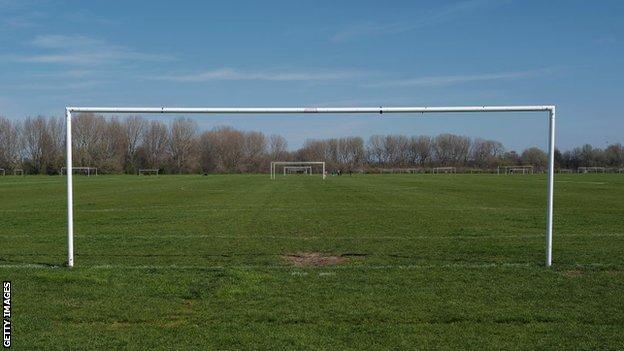 A referee was punched in the face at an amateur pre-season friendly after sending off a Sporting Club de Mundial player in London on Sunday.

Police and ambulance services attended, and referee Satyam Toki, 28, says he is deciding whether to press charges.

Sporting Club de Mundial, set up by the Mundial media outlet, say the player has been removed from the club and will be offered mental health support.

"We categorically condemn the horrific actions," they added on Twitter.

Toki said that he had asked the player several times to control his language and stop complaining, before giving him a 10-minute sin bin.

"He started walking towards the bench and while walking away he threatened to see me after the match," Toki said.

"That was the point where I showed him the red card and got punched immediately in the face. I almost lost my vision for a couple of seconds, followed by excessive bleeding."

Toki said he was concerned that if he pressed charges the player who attacked him might lose his job, but added: "On the other side, if I don't press charges, in the future he might do the same thing to another referee."