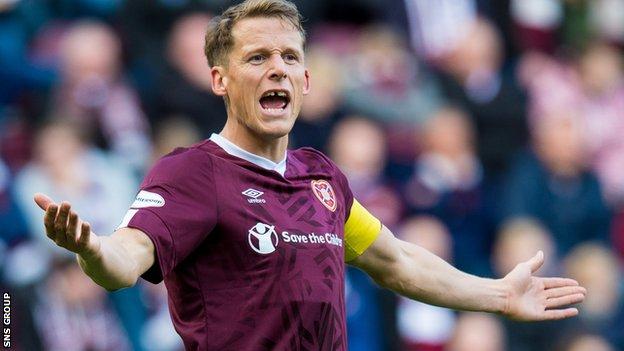 Christophe Berra insists he will always have a "good attitude and a willingness to learn" as he bids to win his place back at Hearts.

The 35-year-old Scotland defender has a year to run on his Tynecastle contract but fell out of favour under previous manager Daniel Stendel.

"I'll turn up and train like I have done over the last 18 years," he said.

"I just want to play as many games as possible. I know I can still play at a good level."

Berra, who rejoined the Edinburgh club in 2017, was captain when Stendel arrived in December but the German did not select him again after a Boxing Day derby defeat to Hibernian.

A temporary switch to Dens Park was then arranged, with the centre-half helping Dundee to keep five clean sheets in the six games he played.

Berra told BBC Scotland's The Nine that he "respected the decision" but stressed: "I was not a bad egg. I was happy to stay and fight for my place."

He will resume his career in the Championship again following Hearts' relegation and acknowledges his team will be "hot favourites" for the title.

"Everyone expects us to go back up but you need to earn the right and all the teams we go up against will be trying their hardest," he said.

"We need to make sure we have the right attitude and application. We have a lot of good players and we go in with confidence. Hopefully, the new manager brings that bit extra."

Berra is of the opinion that Hearts' acrimonious relegation after last season was curtailed "could have been handled better" but admits "on the other hand, we have ourselves to blame".

"It's been dealt with and we need to move on," he said. "All we can do is focus on the season ahead, getting off to a flier and making sure we win the league."