After 369 days, the longest domestic season in English football history has finally ended.

The Championship staged the first game on 2 August 2019, and on Tuesday it became the last to finish.

Fresh in the mind are scenes of Fulham jubilation at a near-empty Wembley Stadium where Scott Parker's side beat Brentford to win the play-off final and promotion to the Premier League.

In a season interrupted by the coronavirus pandemic, and eventually completed with the crisis ongoing, there was unprecedented drama across the three divisions of the English Football League. 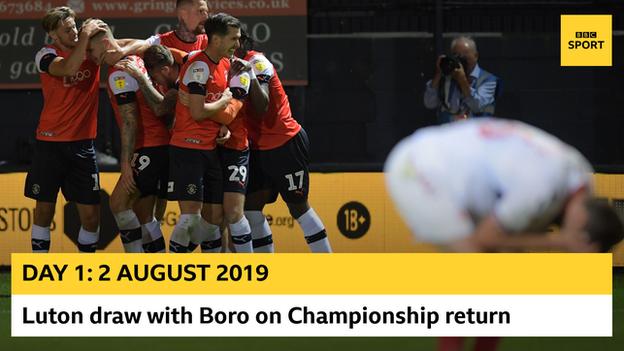 From powerful moments of solidarity, miraculous comebacks and unwitting season-defining goals to long-awaited celebrations and financial scandal, the turbulence of the marathon season was arguably without equal. 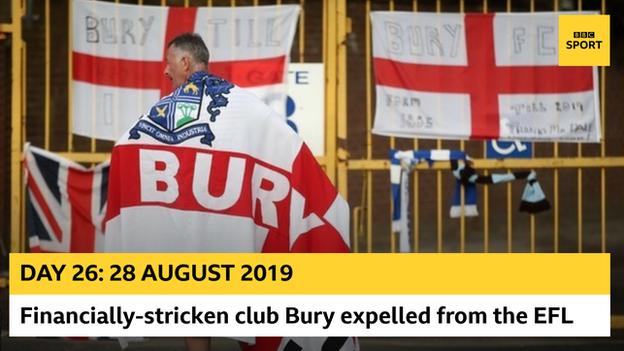 Seventy-two clubs were scheduled to kick off the new season in the first weekend of August 2019.

Only 70 did so, however, as newly promoted League One side Bury's opener against MK Dons was postponed after they failed to produce evidence of financial viability.

By the end of month, there were only 71 clubs left after Bury were expelled from the league. There was anger and dismay from fans. The local community and wider football public were devastated. A select committee inquiry followed.

The financial failure of the Greater Manchester club seemed to foreshadow the economic hardship that was to follow for others.

Bolton, who started the season in administration, were taken over in August but failed to overcome the points penalty imposed on them for the insolvency event and were eventually relegated to the fourth tier of English football for the first time in more than 30 years. 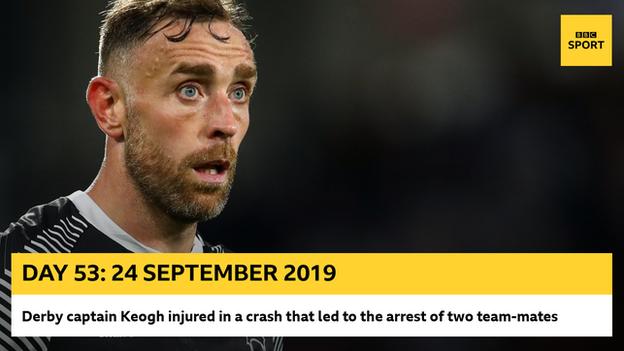 There were major controversies on and off the field in September.

Derby County captain Richard Keogh suffered a season-ending injury in a car crash that led to the arrest of team-mates Tom Lawrence and Mason Bennett.

The pair went on to plead guilty to drink driving and were both fined six weeks' wages. Keogh was sacked in October for gross misconduct over his involvement in the incident.

Leeds United, a club that would go on to celebrate their return to the Premier League by winning the Championship in July, were rocked by allegations of racism over an incident involving goalkeeper Kiko Casilla and Charlton's Jonathan Leko.

The Spanish keeper was eventually banned for eight matches and fined £60,000 after being found guilty of racial abuse. 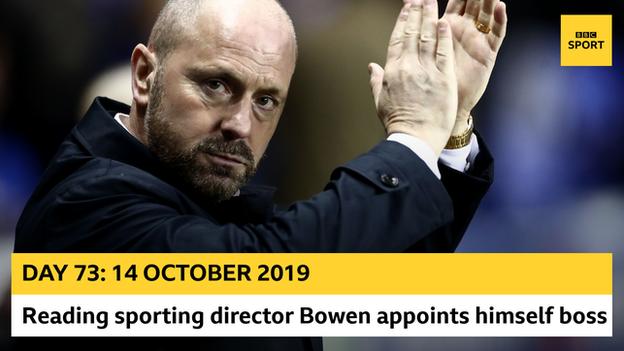 By early October, 10 clubs across the three EFL divisions had changed their managers.

When Jose Gomes was sacked as Reading boss to become the 11th casualty, there was little surprise as the Royals were third from bottom and without a win in six Championship games.

Seeing the Portuguese replaced by sporting director Mark Bowen, the very man who had started to pull together a shortlist of candidates for the job, was the real shock. But Bowen oversaw a significant improvement, with Reading eventually finishing comfortably mid-table.

Meanwhile, Brentford produced one of the great comebacks as they produced three goals in the final six minutes after trailing Millwall 2-0.

With the Bees moving out of Griffin Park at the end of the season, it was one of the most astonishing London derbies ever played at the ground. 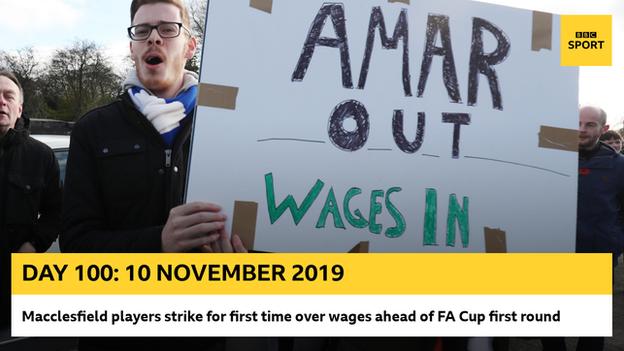 November saw changes in the dug-out at Stoke and Barnsley - one high profile, one quite the opposite.

Barnsley appointed the little-known Gerhard Struber, a 43-year-old who had guided Wolfsberger AC to third spot in the Austrian top flight the previous season and into the Europa League

Both succeeded in keeping their struggling sides in the Championship - although Barnsley had to rely on a points deduction imposed on Wigan to lift them out of the bottom three.

Birmingham City teenager Jude Bellingham added to his fast-growing reputation and scooped the EFL's Young Player of the Month Award for November after starting, and starring in, all five of Blues' games that month. Before the season had finished, he had signed a deal with German giants Borussia Dortmund.

But it was the players who did not take the field for an FA Cup first-round tie that made some of the biggest headlines at the time.

First-teamers at Macclesfield refused to play in protest over unpaid wages, leaving an inexperienced side to lose 4-0 against non-league club Kingstonian.

More strikes followed, with games subsequently suspended, and the Silkmen were punished with points deductions. 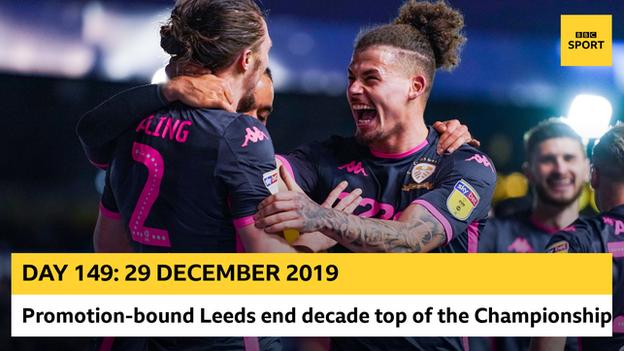 The final days of 2019 prompted a nostalgic mood in December as fans reflected on the decade coming to an end.

Leeds supporters, though, could really look forward with great optimism as the Whites finished the year top of the Championship after beating Birmingham City 5-4 in one of the craziest games of any season.

It left exasperated Leeds boss Marcelo Bielsa assuring reporters after the match that "my heart is OK, I am alive".

One man feeling alive in front of goal was striker Eoin Doyle, who was top of League Two's scoring chart while on loan with Swindon.

So happy was the 23-goal forward, anointed the 'Ginger Pele', that he said he would be "disappointed" to return to parent club Bradford if recalled in January.

He was, and failed to score for the Bantams before being allowed to return to Wiltshire where he took his tally to 25. Come the summer, he left for Bolton 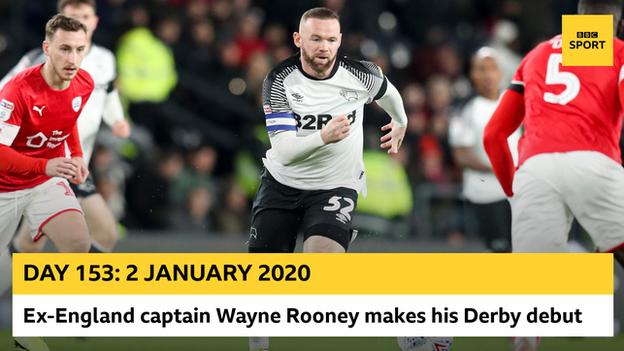 January saw the former England captain - the country's and Manchester United's all-time record goalscorer - finally take the field for Derby after initially signing as a player-coach back in August.

It was an astonishing coup for the Championship club, and he unsurprisingly proved influential as Phillip Cocu's side recovered from early-season horrors to mount a late - but ultimately unsuccessful - push for a play-off place.

From a prized arrival to a welcome departure, as Belgian Roland Duchatelet's six often controversial years as Charlton owner came to an end when he sold up to East Street Investments.

Addicks fans initially rejoiced, but that turned to despair as boardroom squabbles went public, financial questions were left unresolved and another takeover was forced through in July. Questions remain unanswered, chiefly who now owns the club?

What is certain is that they will be back in League One after relegation. 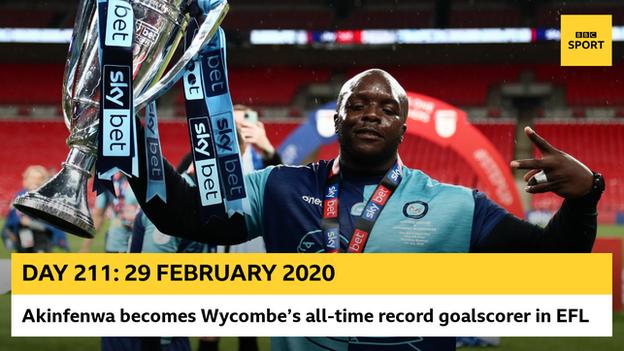 What started with a WhatsApp message finished with promotion to the Championship for Adebayo Akinfenwa, who became Wycombe's top scorer in league football in February.

Better known simply as 'The Beast', he was famously recruited in 2016 after imploring interested managers to "hit him up" on the popular messaging service. He has been repaying Chairboys boss Gareth Ainsworth ever since.

Wycombe, eighth in the table when football was interrupted by the pandemic in March, reached the play-offs after the standings were adjusted on a points-per-game basis.

They would go on to beat Oxford in the League One play-off final to reach the second tier for the first time. 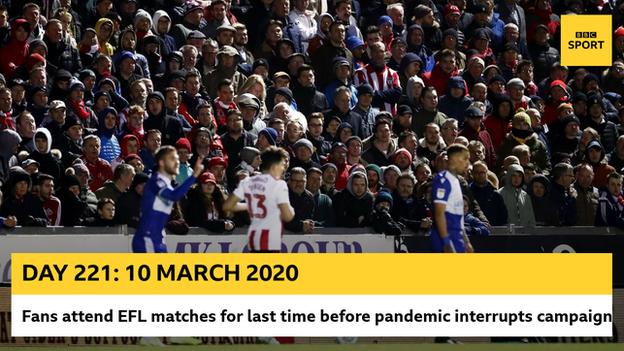 Without knowing it at the time, Matt Godden's winners for Coventry against Sunderland and Ipswich in March sealed the League One title and promotion.

As a club without a home, owing to a long-running row with stadium owners in their own city, the Sky Blues achieved promotion despite playing all 34 games on the road.

With Covid-19 halting both the third- and fourth-tier campaigns, Coventry finished 0.20 points clear of second-placed Rotherham.

March was the final time during the season that spectators were allowed into grounds, as all remaining matches - including the three Wembley play-off finals - were played behind closed doors. 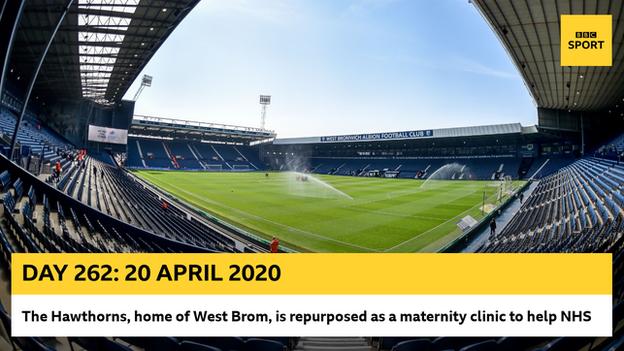 With the EFL in hibernation during April after the country went into lockdown, many clubs directed their resources and efforts towards supporting the communities around them.

West Bromwich Albion, who would go on to celebrate automatic promotion back to the Premier League in July, helped bring new life into the world as their stadium was used as a temporary maternity clinic.

Suites in the East Stand of The Hawthorns were given over to Sandwell and West Birmingham NHS Trust for antenatal and postnatal care.

Players, managers, staff and fans attached to clubs across the three divisions flooded into their communities as volunteers helped deliver everything from food parcels to personal protective equipment. 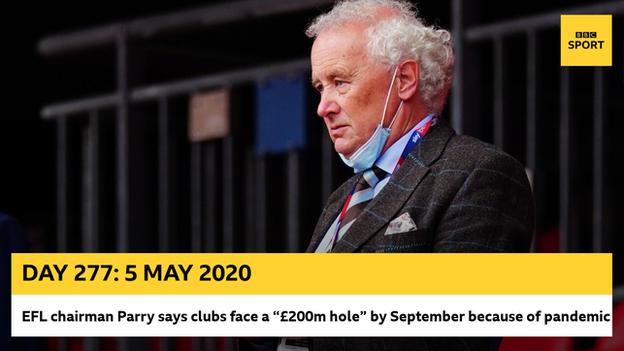 With the word still in the grip of a pandemic and sport on hold indefinitely, the economics of the game became a major focus in May.

Weeks of inactivity meant money was no longer flowing into the game, leaving some clubs battling for their very existence.

The gravity of the financial fallout was laid bare by EFL chairman Rick Parry, who said clubs were facing a potential "£200m black hole" when giving evidence to the Digital, Culture, Media and Sport committee about the impact of coronavirus.

And there were growing concerns for about 1,400 players across the EFL, who would be out of contract by the end of June and left facing uncertain futures. 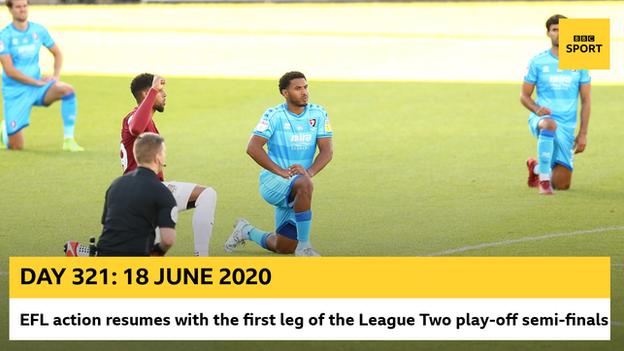 After weeks of deliberation, both the League One and League Two seasons were ended early following a vote of clubs on 8 June.

So, without kicking a ball for 12 weeks, promotion to the Championship was confirmed for Coventry and Rotherham. Swindon were crowned League Two champions, with Crewe and Plymouth going up alongside them.

Tranmere, Southend and Bolton were all relegated from League One, but in League Two the issue remains unresolved.

Stevenage finished bottom, and a further a points deduction imposed on Macclesfield was not enough to send them down instead. That decision, however, is being appealed against by the league, with both clubs on tenterhooks until 11 August.

While plenty was decided without any further physical exertion, EFL action finally resumed after a 100-day hiatus.

There were no fans in the stands, but all games were made available to watch from home, with artificial crowd noise used to create 'atmosphere'.

Powerful moments of reflection also became a staple part of the game, with minute silences held before every game in tribute to the NHS and those who died during the pandemic, while players also took a knee in support of the Black Lives Matter movement. 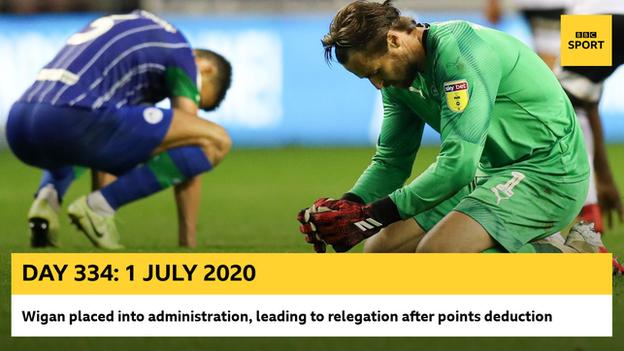 Wigan being placed in administration by their new owners at the start of July, just a month after being taken over, was described by one local MP as a "major global scandal".

It meant the Latics, who won eight, drew six and lost just one of their final 15 games of the season, including an 8-0 club-record hammering of Hull, were relegated on the last day of the season after 12 points were deducted.

A deduction of 10 points or fewer would have seen them escape at the expense of Barnsley, who ultimately saved themselves with an away win at Brentford.

Hull finished bottom and Charlton also went down, with their last hope of a reprieve dashed as the imposition of a 12-point penalty on Sheffield Wednesday for breaching spending rules was deferred until next season.

West Brom left it to the last day to seal automatic promotion to the Premier League, as they finished second to Leeds United, whose return to the top flight after a 16-year absence was achieved as deserved champions. 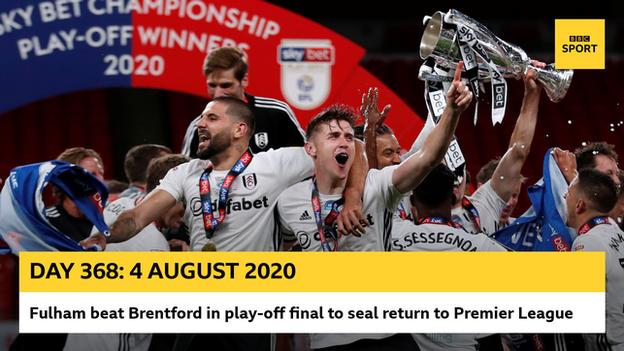 So, after one (leap) year and two days the season finally came to an end.

Time to draw breath at last - but not for long.

The new season is only 39 days away.