Every August, I have the thankless task of predicting how the final Premier League table will look come May.

This season, of course, how things stood in May mattered little, with the campaign not coming to an end until July because of coronavirus.

This 11-month season has brought drama, relief for champions Liverpool and misery for those at the bottom. It has also thrown up plenty of surprises.

Here, I assess every team's 2019-20 campaign - and also look back at whether I was anywhere near being right with my pre-season predictions.

Dreadful start to the season saw the sacking of Unai Emery in December. Signs of progress under Mikel Arteta that included a victory over champions Liverpool and a place in the FA Cup final. Still light years away from old glories and must get Pierre-Emerick Aubameyang to sign a new contract. Will Arteta be working with a smaller budget than his rivals this summer?

What I said in August: "Best bet may be a domestic cup."

Left it very late to save themselves with the win over Arsenal and the draw at West Ham United - regrouped well after the break in the season but got lucky with goalline technology and Sheffield United's "ghost" goal. Huge relief given the serious transfer outlay and after being so poor for so long but have now bought time to improve the squad to avoid similar suffering next season. Will their talisman Jack Grealish be around to see it?

What I said in August: "A season of consolidation is in prospect at one of the great old clubs."

Over and out after five seasons in the Premier League for the Cherries and manager Eddie Howe. For all the praise Howe receives, Bournemouth lost a shocking 22 games this season, old faults in defence were left unaddressed and too many expensive signings have not worked. Long way back - and will Howe now feel he can do no more?

What I said in August: "Usual mix of top-class victories and heavy defeats that sums up Bournemouth's Premier League life under Eddie Howe last season - and I do not see anything different this time."

Looked in trouble for a while but new manager Graham Potter's calm leadership and shrewd signings such as Neal Maupay and Leandro Trossard, allied to an altered passing style, saw some fine results (and some hefty losses admittedly). They did enough to finish in a creditable position. Adam Lallana will add experience and quality. Proved doom-mongers like myself wrong.

What I said in August: "Potter has many supporters and Brighton is a club to admire - but last season's decline must mean worries this time around if they do not make a good start."

Brilliant management once again from Sean Dyche, who does not get the credit he deserves, to put Burnley in the top 10. Based on playing to his side's strengths, namely an outstanding keeper in Nick Pope and top-class defenders, but more strings to their bow. Worrying talk that the Dyche era may be over - Burnley would struggle to find someone better.

What I said in August: "A smart manager who knows how it works and how to get the best out of his squad. He will keep Burnley up again."

Frank Lampard deserves great credit for his work this season, operating under a transfer ban at the start of his first season in charge (and his first as a Premier League manager) but blooded youngsters such as Mason Mount and Tammy Abraham successfully and utilised his squad well at the sharp end of the season. FA Cup final appearance, Timo Werner signed - all very satisfactory.

What I said in August: "Chelsea have an uncanny habit of achieving against the odds. Remember the 'disappointment' under Maurizio Sarri when they only finished third and won the Europa League? Never bet against Chelsea for a trophy either."

Dreadful end to the season, which included seven straight league losses before a final draw, a real anti-climax but never any relegation worries under Roy Hodgson. What will be the next move? Will Hodgson still be around next season? Wilfried Zaha wants to make the break so it will be an intriguing few weeks. Solid. Unspectacular. Safe again.

What I said in August: "Another season where mid-table consolidation is the best a superbly supportive fanbase can hope for."

Shambolic season saved only by the optimism engendered by the appointment of Carlo Ancelotti as manager. Marco Silva was sacked in December but he was not solely to blame. Recruitment policy has been catastrophic and even Ancelotti could not get a tune out of disinterested players at the end. Everton must now back the massive Ancelotti rebuild or his appointment is a waste of time. See below for misplaced optimism.

What I said in August: "If they can get it right in the final days of the transfer window, and that must include adding a central defender, they could have a real crack at the top six and beyond." 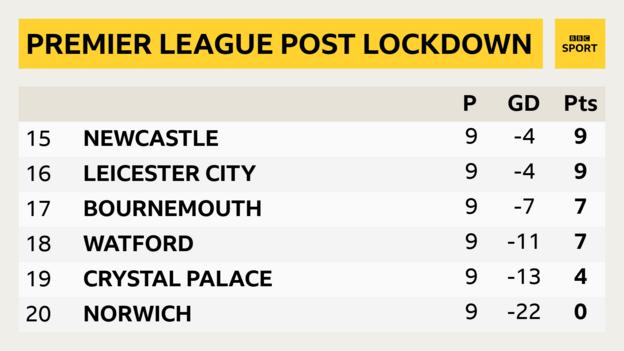 Look at the Premier League table and this is a top-class season. Scratch beneath the surface and it is a massive anti-climax. The Foxes were so good for so long, pleasing on the eye and triumphant under Brendan Rodgers, but faltered in the second half of the season to lose a 14-point advantage in the Champions League places to miss out. So much to admire but a huge missed opportunity.

What I said in August: "The Foxes are a club with genuine top-six aspirations."

In a different class to every other team. The eventual 18-point winning margin did not flatter them. The title, their first for 30 years, was won with seven games to spare and their coronation a formality for months. World-class performers in every area of the pitch under the management of Jurgen Klopp. No-one to touch them in the league.

What I said in August: "This season the Premier League will be firmly in the sights of manager Jurgen Klopp and his players."

Glorious on the eye and had a world-class performer in Kevin de Bruyne but paid for not replacing Vincent Kompany as obvious defensive frailties hurt them. You cannot lose nine Premier League matches and expect to finish ahead of Liverpool. City will come back hurt next season - but must have a better defence.

What I said in August: "Kompany's presence will be hugely difficult to replace on and off the pitch but class in all parts of the pitch will make it a Premier League treble."

Inspired by the January signing of Bruno Fernandes, United did superbly to reel in Leicester City and ensure manager Ole Gunnar Solskjaer achieved what should be the minimum expectation of top four. Good signs, however, and in Mason Greenwood a sensational teenage talent. Wise buying can push them to the next level as they are miles behind Liverpool.

What I said in August: "Can Solskjaer turn around United's decline? A game-changing signing in the next day or two may help but currently I struggle to foresee a top-four place."

Hands up. Got this one very wrong. I was convinced Newcastle United would be relegated given the ill-feeling surrounding Steve Bruce's appointment and the apparent miracle performed by Rafael Benitez. Maybe not such a Benitez miracle after all as sound management by Bruce put them in a similar 13th placing without the over-blown reverence reserved for Benitez. Safe and sound. Any chance of a takeover?

What I said in August: "When will the torture end for Newcastle supporters? It may get worse before it gets better."

Miserable season for the Canaries. The fantastic win over Manchester City was the bright spot as careful financial management and injuries made relegation inevitable well before the season's end. Chose to safeguard long-term future rather than gamble with the club's finances but this was a disheartening experience. Will they now lose Todd Cantwell, Max Aarons and Ben Godfrey?

What I said in August: "So much will depend on whether Teemu Pukki, who scored 29 goals last season, can make the transition to elite level. If he can, then I shall order a large helping of humble pie in advance."

Magnificent effort from Chris Wilder and his Blades players. A top-class feat of management to not only get Sheffield United into the top flight but consolidate and almost qualify for Europe. Sharp tactically and with a team that was committed and entertaining. Under this manager, the Blades are in safe hands.

What I said in August: "Sheffield United are plenty of people's tips to go down but I am going with the Chris Wilder factor and the stirring surroundings of Bramall Lane to keep the Blades in the Premier League." 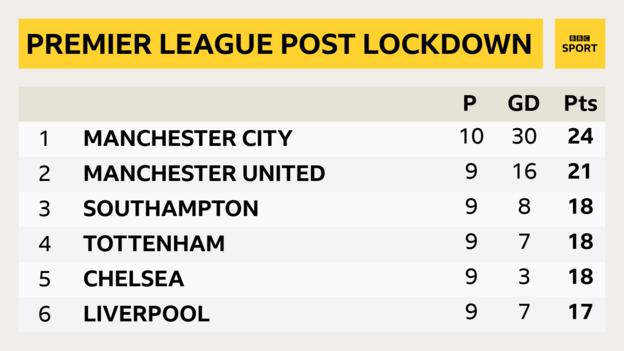 Southampton fans are understandably sick of being reminded about that 9-0 home defeat by Leicester City in October but it simply must be used a reference point for a superb recovery by manager Ralph Hasenhuttl and his players. Credit goes to the Saints board for refusing to panic and they have been rewarded with a fine second half of the season and a long-term commitment from an excellent manager. Danny Ings was magnificent with 22 league goals.

What I said in August: "Southampton look to have got it right again with the charismatic Austrian Ralph Hasenhuttl."

No Champions League next season, the price paid for a dreadful start that saw the hugely popular Mauricio Pochettino sacked just five months after reaching the final of the tournament. Jose Mourinho, however, has been getting results without fanfare in largely unspectacular fashion to qualify for the Europa League. It's a start, although Mourinho will need to improve again next season to convince the doubters. He has got plenty of work to do - but plenty of talent to work with.

What I said in August: "The title? No - let's not forget they lost 13 league games last season - but top three and time to end Pochettino's wait for a trophy."

Where do you even start? Four managers, with Nigel Pearson sacked two games before the end of the season after giving them a chance of survival. Watford could not survive that sort of instability. Panic-stricken campaign ends in relegation. Serious questions for the club's hierarchy. Truly chaotic.

What I said in August: "Yes - you have read it right, Watford supporters. No relegation tip this year… which may of course be bad news."

David Moyes did exactly what was required by keeping West Ham up, making smart signings such as Tomas Soucek and Jarrod Bowen and bringing the best out of Michail Antonio. Moyes must now get the chance to build further and stamp his own identity on the team even further.

What I said in August: "You can bracket the Hammers with those clubs who might fancy breaking into the top six if they get the wind in their sails."

Another excellent season for Wolves, which may yet end in Europa League qualification via the league if Chelsea win the FA Cup. It may be even better than that, as they are still in this season's Europa League. Organised under manager Nuno Espirito Santo, exciting and with thrilling talent in the shape of Adama Traore and Raul Jimenez.

What I said in August: "Fully expect a top-10 finish."