Who scored the most goals? Who kept the most clean sheets? Which player was the league's top shooter/passer/tackler? Oh, who cares?

BBC Sport ignores the information you can find elsewhere and digs into some of the more interesting stats of the longest, strangest Premier League season on record...

Before the Premier League's restart on 17 June there was much interest in how the 100-day hiatus might affect the game - would we see a boat-load of goals, a greater number flying in late in matches against knackered defences or a huge increase in away wins like in Germany?

Off the field things were certainly different, with stringent safety measures in place and testing twice a week to combat coronavirus, as well as eerie, empty stands on matchdays.

On it, though, it was pretty much business as usual...

Speaking of which, the return of football brought with it the same ongoing arguments about video assistant referees (with a bit of added spice from some faulty goal-line technology at Villa Park in the first game back).

This has been the first full English top-flight season to use VAR, meaning we can now have a proper look at which teams have benefitted or suffered most at the hands of the theoretically more accurate decision-making tech.

We'll start with the beneficiaries...

And end this bit with those on the receiving end...

It's the final table that matters

What little drama we did get on the final day came from Manchester United edging out Leicester to take a top-four spot alongside Liverpool, Manchester City and Chelsea, while Aston Villa survived at the expense of Watford and Bournemouth, who join Norwich in next season's Championship.

As any seasoned sportsperson will tell you, the only league position that matters is the one you finish the season in.

But allow us a little flight of fancy to consider what might have been and also send Bournemouth on their way with a reminder of those glorious three days in September before everything went to pot.

In fairness, in 2019-20 Bournemouth became the first side to concede 60+ goals in five consecutive Premier League campaigns, so they can't say the warning signs weren't there.

At the other end, Chelsea will be glad that their opening-day 4-0 defeat at Manchester United wasn't indicative of what was to come.

What began disastrously for Frank Lampard, ended with him achieving the highest finish for an English manager in a debut Premier League campaign since Frank Clark led Nottingham Forest to third in 1994-95.

Time to freshen things up

Not content with having the oldest manager in Premier League history in the evergreen 72-year-old Roy Hodgson, Crystal Palace fielded a group of players with the joint-highest average age in 2019-20.

The average age of those starting games in Palace's campaign was 29 years and 336 days, suggesting Hodgson has something of a rebuilding job on his hands.

Palace also made the fourth-fewest team changes in the division - 59 of them - a tally perhaps unsurprisingly beaten only by Wolves, Sheffield United and Burnley.

Manchester City and Liverpool will also no doubt have one eye on renewal, with deeper pockets than most to facilitate it. Not such an issue for their comparatively sprightly rivals Manchester United, though.

Returning briefly to Palace, Hodgson's side interestingly failed to score more than twice in any of their Premier League games this season.

It's the eighth time a team has gone through a whole campaign without doing so, but Palace are the first to do it and not go down.

There's life in the old dogs yet.

Oh when the Saints...

We'll end this with a side whose mid-table finish is a misleading mask for one of the great rollercoaster seasons - Ralph Hasenhuttl's Southampton.

No side in the division has a bigger disparity between their home and away form, with the Saints second bottom for points taken at St Mary's in 2019-20 and third for their form on the road. 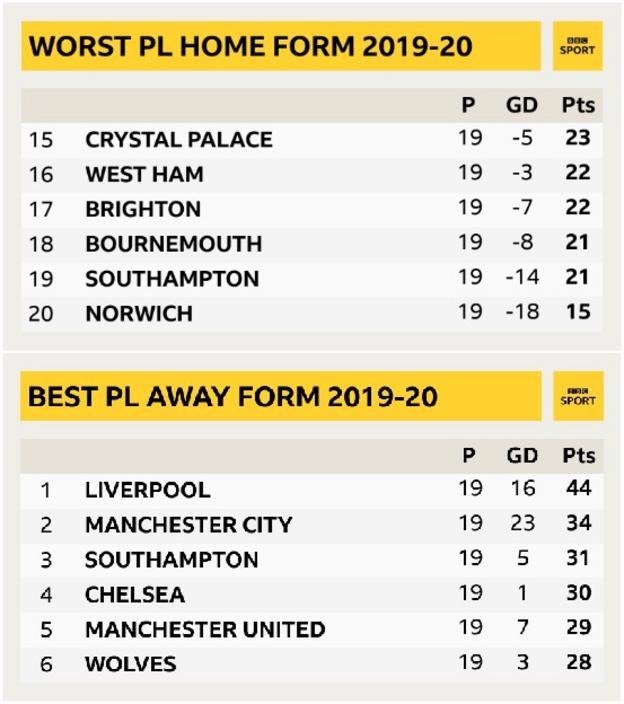 You'll remember that Hasenhuttl's team were beaten 9-0 at home by Leicester back in October - the biggest away win in English top-flight history.

Results like that tend to end managers' reigns, but Saints stuck by their man, saw an upturn in form either side of the turn of the year, gave him a new deal in June and were further rewarded with the third-best form of any side post-lockdown. 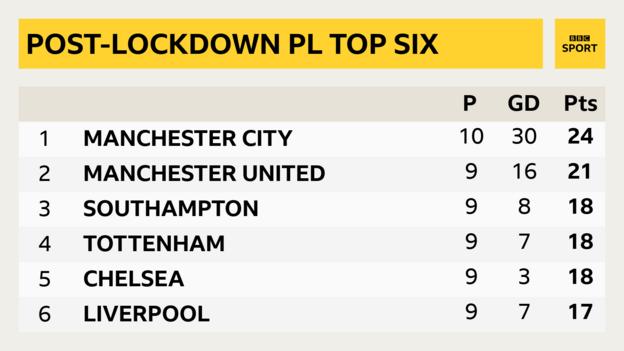 Danny Ings finished one strike shy of the league's top scorer Jamie Vardy and with his 22 goals became just the third different Southampton player to hit 20+ goals in a single Premier League season, after Matt Le Tissier and James Beattie.

Southampton are a team to keep an eye on when the 2020-21 season gets under way in just seven weeks' time.