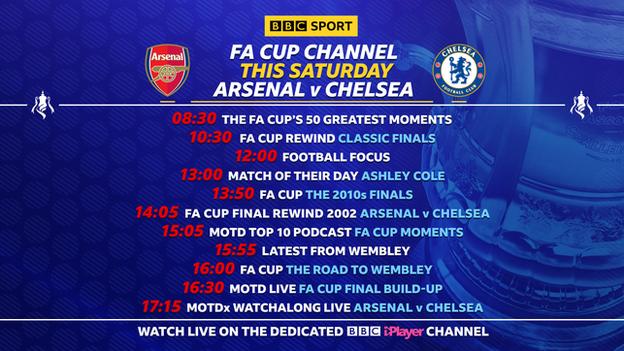 Arsenal and Chelsea meet in the Heads Up FA Cup final on Saturday, 1 August - and you can watch it live on BBC TV.

The game kicks off at 17:30 BST at Wembley and can be watched on BBC One, the iPlayer and the BBC Sport website.

There are options to listen with no crowd noise, BBC Radio 5 Live commentary or with no commentary at all on the Red Button and website.

Build-up starts at 08:30 BST on a special FA Cup final channel on the iPlayer and website.

This season's final has been renamed the Heads Up FA Cup final to raise mental health awareness.

BBC Sport's coverage kicks off with a chance to watch the 50 Greatest FA Cup moments, then at 10:30 BST there will be highlights of five past finals.

A live Football Focus is on at 12:00 BST followed by a Match Of Their Day special with Ashley Cole, who played for both sides, at 13:00 BST.

Some more highlights of past FA Cup finals - including the 2002 match between Arsenal and Chelsea -follow.

There will be an FA Cup special of the MOTD podcast - and then BBC One coverage starts at 16:30 BST for Match of the Day Live.

And on the BBC Sport website, FROM 17:15 BST you can join the fun by watching MOTDx Watchalong, with MOTDx presenter, YouTuber and Arsenal fan Michael 'Timbsy' Timbs and Radio 1 presenter and Chelsea fan Abbie McCarthy.

There will also be in-play highlights in our live text commentary.