"The prize is not that somebody's going to clap you or you're going to get a standing ovation. The prize is the Premier League."

After 45 games and almost 12 months of a season interrupted by the coronavirus pandemic, almost everything in English football's second tier is still to be decided.

Who will finish second and claim the huge financial rewards of a place in the top flight? Who will grab the final couple of play-off places? And who will drop down into League One?

The fight for second

Leeds have already wrapped up the title and a place in the top flight for the first time since 2004.

Beneath them, there is an almighty fight between West Brom, Brentford and Fulham for that second automatic promotion place. Last season, it was estimated that promotion could result in a £170m increase in revenue.

The Baggies have had a rollercoaster ride since league fixtures resumed on 20 June. They were six points clear of third-placed Fulham and 10 ahead of fourth-placed Brentford when the season was put on hold because of the pandemic.

It looked like they had blown their chances of going up after losing at Huddersfield Town on Friday, but Brentford's amazing run of eight successive wins was halted at Stoke a day later to leave West Brom one point clear with a game to go, and Fulham only two points off second spot.

"The Championship is hard anyway," said Bilic, who is hoping to take Albion back to the top flight after two seasons in the second tier.

"This season is longer than ever and we should be proud of what we have done so far. Now is the time to finish it off, we've got to do it."

Two sides from the capital, separated by just a few miles, are also hoping they can make it to the promised land.

Third-placed Brentford have played some of the best football of any side this season and, in their 'BMW' front three of Said Benrahma, Bryan Mbeumo and Ollie Watkins, they have an attacking force that would cause many a Premier League defence problems.

The three of them alone have combined for 57 of Brentford's 79 league goals - more than eight teams have scored all season.

"One more big game on Wednesday against Barnsley," said boss Thomas Frank after their loss at Stoke on Saturday.

"I promise you we're ready to fight and play and run on Wednesday night."

But five miles east along the north bank of the River Thames, Fulham can still have a say.

Having lost to Brentford and then Leeds in their first two games back after the resumption, it looked like Scott Parker's men had lost their chance.

But a run of six wins and a draw from their past seven matches has given the former England midfielder hope his side can take one more step.

"We had two negative results coming out of lockdown, but since then my team have been very good at grinding out results," said Parker.

"There are times we've been 10 to 13 points adrift. We've had to fight and battle with pressure that comes with that and the outside voices. We've not got the credit we deserve at times. To take this season, and the teams above us, like Brentford and West Brom who are fantastic teams, to the wire is fantastic."

Trio in the play-off hunt 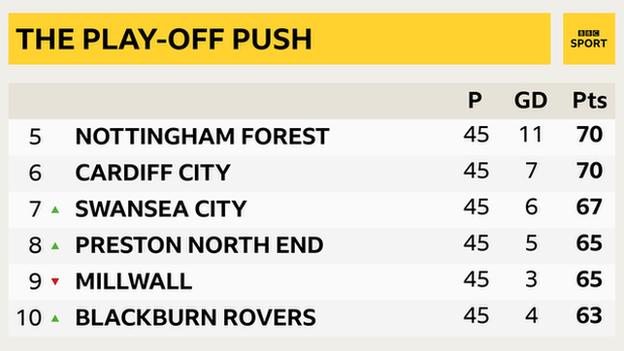 The race for the final play-off places is also quite intriguing.

Two of West Brom, Fulham and Brentford are guaranteed to be in the play-offs, but the other two spots are still up for grabs between Nottingham Forest, Cardiff City and Swansea City.

"What I don't want is anything interfering with our performance and us winning our game," Swansea boss Steve Cooper told BBC Wales before his side's trip to Reading, which they must win to stand any chance of finishing in the top six.

"We've got to go and play well, be confident, be clinical in both boxes and do whatever it takes win any football match.

"We can't influence what happens elsewhere anyway, but if there's something that we need to know and we're in a position where we need to know I'm sure we'll get that info."

Battle to avoid the drop

If the promotion and play-off races are tight, then the relegation battle is even more dramatic.

Of course, much depends on Wigan's appeal against a 12-point deduction for going into administration. That sanction will be applied after their game at the DW Stadium, so they go into their home match against Fulham unofficially occupying the final relegation place.

But their form has been excellent, losing only one of their past 14 games and thrashing Hull 8-0 in their most recent home fixture. That sequence has seen them earn a chance to survive and their positive goal difference could be the difference between staying up or going down on Wednesday.

"We could win the game and still it might not be enough and that's the real disappointment because these players don't deserve that," manager Paul Cook said after Saturday's draw with Charlton.

"I've got to pat them on the back for everything they've done for the people at the club, the town, and everyone who was made redundant that's for sure."

Cook added: "We always have a strong record at the DW Stadium. It's an absolute shame that the supporters will not be in the stadium, but we know where they are, we know they'll be sitting at home and we'll be getting all their support and their energy that will see us get over the line."

Meanwhile, Hull boss Grant McCann says his side need "a miracle" if they are to stay in the second tier.

Having been a point off the play-off places after winning 1-0 at Sheffield Wednesday on New Year's Day, the Tigers have won just one more league game since and are bottom of the table.

They travel to a Cardiff City side who need a point to secure a play-off place, but Hull have not scored in more than 300 minutes of action.

"There's been probably only a handful of performances where I've been pleased, although we didn't get a result, but we've just been disappointing.

"But we still have a chance mathematically and going to Cardiff on Wednesday we'll see and we'll try to put a performance in."

'This is how we earn our money'

One place above the Tigers are Barnsley, who ended a four-game winless run on Sunday with a 1-0 victory over play-off-chasing Forest. It gives them an outside chance of survival, albeit they still need to beat Brentford at Griffin Park.

"But my energy and thoughts aren't so much on Brentford, they're on my team and we are working on a very good plan at the moment.

"It's a big task, but I like big tasks and challenges on this level."

Could Luton - fourth-from-bottom when factoring in Wigan's points deduction - be the ones to survive?

A 1-0 win at Hull City on Saturday gave them a significant boost, and a record of one loss in their past 11 games has seen the Hatters move outside of the provisional relegation places.

They host a mid-table Blackburn Rovers side and know that three points would be good enough to stay up.

"There's nothing that can prepare you for being a manager - and I've done every course under the sun, and coaching badges and stuff - and it's brilliant through the week but this is the nitty-gritty.

"I sat down with both Paul (Hart, assistant manager) and Mick (Harford, chief recruitment officer) just after half-time and I said 'this is how we earn our money', not the Monday to Friday, it's those decisions you make in the heat of the battle."

So who can make the right decisions in that battle - decisions that could have long-lasting ramifications for clubs at both ends of the table?

We will find out on Wednesday as one of the most exciting Championship seasons finally comes to an end.