Manager Grant McCann says Hull City "haven't been good enough" and need a "miracle" to avoid relegation from the Championship after a 1-0 loss to fellow strugglers Luton Town left them relying on other teams slipping up.

The Hatters boosted their own chances thanks to Kazenga LuaLua's late 20-yard strike.

The result leaves Hull three points adrift of both Luton and Charlton Athletic, although the relegation picture is further complicated by the Latics' possible 12-point deduction for going into administration.

Wigan, who are 13th after drawing against the Addicks earlier on Saturday, would drop down to League One as it stands because they are only 10 points above Luton and Charlton.

Hull have a vastly inferior goal difference to Charlton but are only two goals worse off than Luton prior to facing Cardiff City in their final game on Wednesday.

And, if Wigan beat Fulham, McCann's side cannot go above the Latics - even with a 12-point deduction for Paul Cook's side.

"We are on the brink," said McCann. "We need a miracle. We need to win at Cardiff and hope results elsewhere go our way.

"It's a slight chance we have got. First and foremost we have got to win and judging by our form since the middle of January, everyone will tell you we have zero chance.

"We have to keep that belief but we are still relying on others. For the first time this season it isn't in our hands and that is our own fault.

"We just haven't been good enough on the pitch. We are just not winning games. From the end of January onwards, we have been really poor in every single performance.

"I can only focus on my job. There is a bigger picture here and a bigger plan. Until I am told otherwise, I am focused on trying to regroup my thoughts." 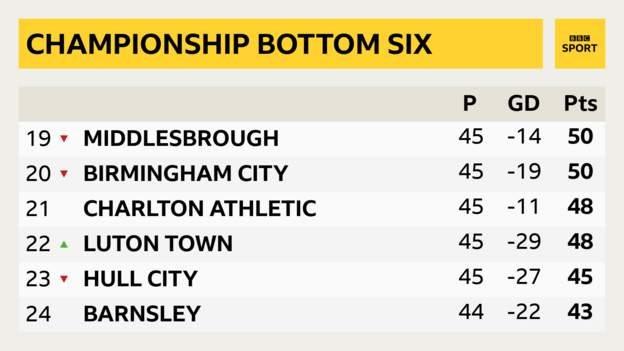 Bottom side Barnsley could also yet stay up, although they must win both of their remaining fixtures - starting against Nottingham Forest on Sunday - and hope other results go their way.

If the Tykes are able to beat promotion hopefuls Forest, it means all three relegation spots will need to be decided on the final day, with eight teams still not yet certain of survival.

But, of the eight, Huddersfield's vastly superior goal difference means they are all but safe.

It did appear to have some impact during the first period against Luton, as a more direct approach saw them create the better of the chances, albeit none that seriously troubled keeper Simon Sluga.

After the break, however, Luton took control and looked by far the more likely to find a winner.

James Collins and Danny Hylton both missed good opportunities as the visitors poured forward, while Pelly-Ruddock Mpanzu curled an effort narrowly wide of the post.

They eventually found a way through with five minutes left, however, when LuaLua fired a fizzing strike into the bottom corner from outside the box.

It means Luton, who have lost just two of their past 14 games, are now unbeaten in four going into Wednesday's vital game against Blackburn Rovers.

Luton could stay in the second tier even if they lose their final game, yet the Hatters could go down even if they win - such is the complicated nature of the final day of fixtures.

They will finish above Charlton if they better the Addicks' result. But if both Wigan and Hull lose on Wednesday then they will be assured of a second season in the Championship.

"We have got one massive game to go," said boss Nathan Jones, whose side face Blackburn Rovers on Wednesday. "Who knows what is going to happen - if someone is going to get deducted then deduct.

"At the minute we know that we need something from the last game. It's a good feeling.

"They are amazing, they are immense, I love working with them and I am so proud of them."