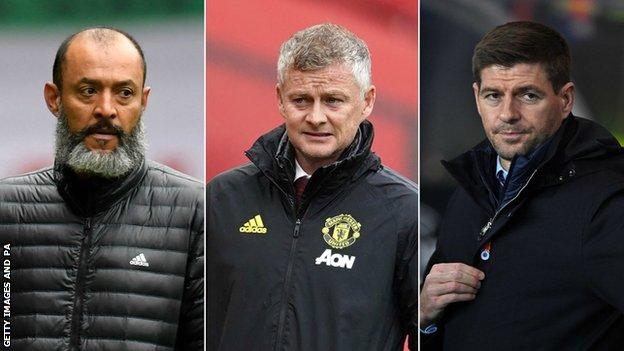 Manchester United have been drawn against Istanbul Basaksehir or Copenhagen in the last eight of the Europa League, while Wolves have a potential tie against Sevilla or Roma.

Rangers will play Inter Milan or Getafe if they reach the quarter-finals.

United and Wolves will meet in the semi-finals if both progress.

The three British sides have the second legs of their last-16 ties to play with United 5-0 up on LASK, while Wolves are level at 1-1 with Olympiakos.

United's return leg takes place on 5 August at Old Trafford, while Wolves, who are also at home, and Rangers play on 6 August, with the Scottish club travelling to Germany.

Wolves boss Nuno Espirito Santo refused to be drawn on his side's possible opponents as he prepares for a Premier League game against Everton on Sunday.

"There are so many 'ifs'. It can be this, it can be that, so it's very difficult for me to answer and make a proper evaluation because so many things can happen," he said.

"Honestly, I don't even know what to say because I haven't thought about it. I'm only focused now on Everton, sorry."

Two last-16 ties - Inter Milan v Getafe and Sevilla v Roma - will be be played as one-off matches in Germany after the coronavirus outbreak in Italy and Spain in March resulted in both first legs being called off.

The final three rounds, which will also see all ties played as one-off matches, will then be held in Germany at the home grounds of Duisburg, Fortuna Dusseldorf, Schalke and Cologne.

The latter venue will host the final, which has been moved from Gdansk in Poland, on 21 August.

Uefa says that the games will be held without spectators present.