West Ham "deserve to be in the Premier League" says captain Mark Noble, after his side's blistering first-half performance ensured a victory that virtually secures their top-flight status but leaves Watford in major trouble.

David Moyes' men picked up a crucial win to move six points clear of the relegation zone with two games remaining and, with a goal difference that is also significantly better than their rivals', the Hammers' place in the top flight seems assured.

Noble, who came through the club's academy and made his 500th appearance in the match, said: "It's an amazing day for me, my family - this club deserves to be in the Premier League and tonight went a long way to achieving that.

"Seventeen or 18 years ago I was trying to sneak into Upton Park without a ticket. To play 500 games for the club you grew up supporting, grew up half a mile away from here, your family support - it's what dreams are made of."

The picture looks much bleaker for Nigel Pearson's men, who lie just three points outside the relegation zone and face Manchester City and Arsenal in their remaining games.

The hosts scored twice in the opening 10 minutes through the in-form Michail Antonio, who swept home and Tomas Soucek's bullet header from Jarrod Bowen's cross.

Declan Rice curled in a sublime third before half-time and, although Troy Deeney pulled a goal back at the start of the second half, Watford could not conjure a miraculous turnaround.

'Promise less and deliver more' - West Ham do just that 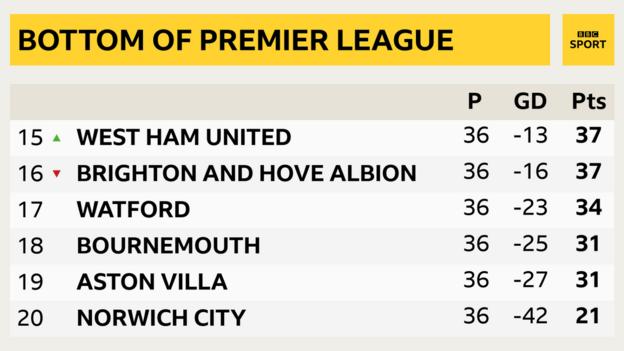 Former Manchester United and Everton boss Moyes was appointed for a second spell as West Ham boss in December, with the side just one point above the relegation zone.

Preserving the club's top-flight status will have been the aim and Moyes will achieve that objective barring a freak set of results over the coming days.

West Ham's goal difference currently stands at -13, considerably better than Bournemouth's -25 and Aston Villa's -27 so even if they are caught on points there will need to be a colossal goal swing for them to be dragged down into the Championship.

Prior to the match, Moyes had asked his players to "promise less and deliver more" and they did just that in a terrific first-half showing that eased any nerves.

Forward Antonio, fresh from scoring four against Norwich in the previous game, took his tally to nine for the season with a calm, left-footed finish to set them on their way.

Soucek's flying header and Rice's delightful goal ended the game as a contest, despite there being nearly an hour still to play.

Moyes said: "We are in a good position. Teams still have that chance and we have to do that job. Even scoring the goals has helped - I wanted us to keep our goal difference as good as it could be. 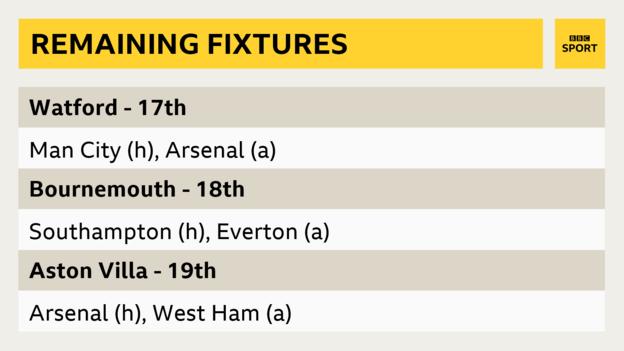 The sides occupied the two places immediately outside the relegation zone and the result was a damaging blow for Watford and their ambitions of staying up.

Heading into the game, the Hornets had shown decent form by picking up back-to-back victories but a desperately poor first half could prove fatal.

Pearson's men remain perilously placed - they need four points to be certain of staying up but finish the season with a daunting home fixture against Pep Guardiola's City and a trip to Arsenal.

Pearson said: "First half we let the game pass us by. We had passengers, which is disappointing at this stage of the season.

"The second-half performance was much improved - very competitive. It's annoying. Very disappointing. It means now we have got to find another one or two good results.

"We know that [we have the toughest run-in] but we have to cope with it. I can't waste time thinking about what everyone else will do.

"It comes back to bite you where you don't want to be bitten."

Rice said: "It's the best I've scored - it's only my third goal! I scored two bangers in the warm-up, the lads are always on to me to shoot more, when I saw it hit the back of the net it was a great feeling - it wouldn't have looked good to get a blank this season."

Get the ball to Bowen - the stats

723 comments
Back to top
unknown