Sheffield United continued their push for European qualification as they moved into the Premier League's top six with a convincing win over in-form Chelsea at Bramall Lane.

Chelsea's defence was shaky throughout and they were ruthlessly punished just 15 minutes later when Enda Stevens crossed and McBurnie was left completely unmarked in the six-yard box to power home a simple header.

The damage was completed when McGoldrick capitalised on a dreadful defensive mix-up to plunder his second late in the second half.

The visitors had scored the most number of away goals in the Premier League before this match, including three at Crystal Palace in midweek, but never looked like adding to their tally.

Manager Chris Wilder has drawn many plaudits this season for Sheffield United's organisation and team ethic, their desire to keep the ball out of their net a telling contrast to the fragility of their illustrious visitors.

If Leicester City and Manchester United win their games in hand against Bournemouth and Southampton respectively, Champions League-chasing Chelsea, currently third, could find themselves in fifth when next in action against Norwich on Tuesday.

Reward at last for McGoldrick

McGoldrick was named Sheffield United's player of the year in 2019 as he scored 15 times in their successful promotion campaign, but until now has had no luck in front of goal in the Premier League.

He will, however, be a very popular goalscorer among Blades fans who appreciate the hunger and work ethic he brings to every performance.

And, despite that lack of goals, his sharpness was in evidence when he pounced midway through the first half.

He then got a well-deserved second with 13 minutes to go as his driving run created an opening and he was in the right place to bury the loose ball.

His strike partner McBurnie had scored United's second with a powerful header before half-time and substitute Lys Mousset should have made it four when he raced clear but clipped past the post.

This was United's 10th home win of an outstanding season and Wilder's side are a good bet to secure European football at Bramall Lane for the first time in their 130-year history.

No defence for Chelsea

Chelsea had plundered 36 goals in their 17 matches away from Stamford Bridge in 2019/20 and Christian Pulisic, Willian and Olivier Giroud were in excellent form coming into this game.

But their leaky defence has caused them problems throughout this season and once again it was far too easy for their opponents to score.

After Mount had failed to clear in the run-up to the opening goal, for the second, Willian allowed Stevens to escape down the left before centre-backs Andreas Christensen and Kurt Zouma went missing and McBurnie capitalised.

Both Christensen and Mount were replaced at half-time as manager Frank Lampard tried to wrest back control of the game.

Giroud came off the bench as well but Sheffield United boast the Premier League's third meanest defence and they comfortably kept Chelsea at arm's length throughout the second half.

Indeed, it was another horrible error from the Chelsea backline that led to the home side's third, substitute Antonio Rudiger screwing a clearance into the path of McGoldrick.

Lampard's team have now shipped 49 goals this season, compared with the 27 conceded by title winners Liverpool.

After Norwich at home, Chelsea travel to Anfield to face the champions before wrapping up the season at home to fellow European hopefuls Wolves.

It could be a very tight finish for the Champions League spots. 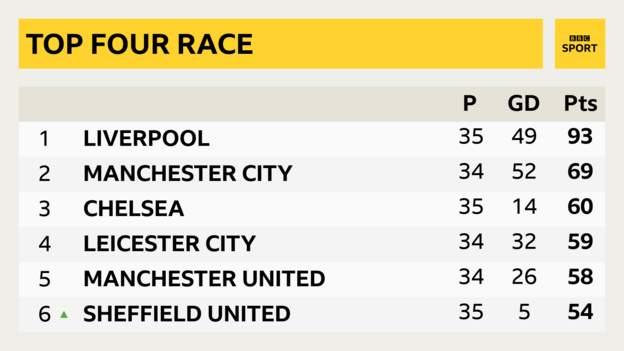 Home comforts for the Blades - the stats

'Not good enough' - what they said

'Better than us in every way' - what they said

Sheffield United striker David McGoldrick: "Thirty-five games in and the table doesn't lie. That was us at our best today. I said in the press I wasn't concerned that I hadn't scored. The goals were coming as I have had chances. I hope there is many more to come as it means the world to me."

Chelsea manager Frank Lampard: "They were better than us physically, in the mind and with the ball. So you lose the game. They were stronger than us. You feel and hear every noise and all I could hear was Sheffield United voices. They are a good team. If you come here and perform below par this is what will happen.

"I am concerned with how we performed. I learned a lot today. We need to put that to bed and fight for the top four."

Sheffield United could do Chelsea a favour when they play fourth-placed Leicester at the King Power Stadium on Thursday (18:00 BST) while before that the Blues are at home to Norwich on Tuesday (20:15).