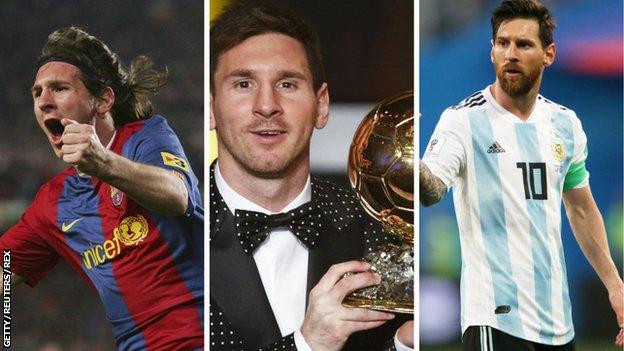 Has Lionel Messi scored his last goal for Barcelona?

The Argentina captain submitted a transfer request on Tuesday, meaning a Nou Camp career spanning 16 years and featuring 634 goals as well as 34 trophies could be at an end.

There have been countless incredible achievements and landmarks along the way, leading to a record six Ballons d'Or.

Earlier this summer, BBC Sport picked what we thought were his 10 most iconic moments for Barcelona and Argentina and asked you to rank them.

Here they are from one to 10 as decided by you.

You know he's not bad when scoring four against a Premier League team only makes it in at number nine... 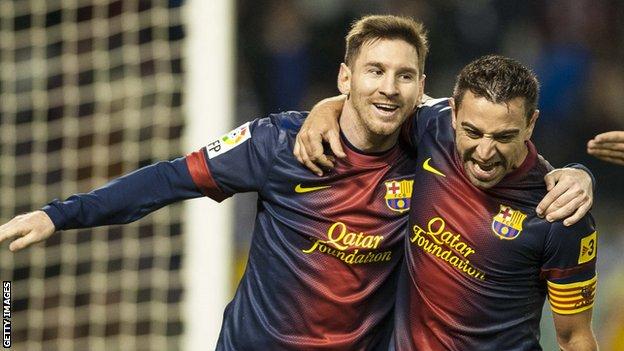 Even by the remarkable goalscoring exploits of Messi and Cristiano Ronaldo, the Argentine's record-breaking 2012 still seems implausible - 91 goals in the calendar year.

He netted 79 goals for Barcelona and 12 for Argentina - in a total of 69 games for club and country.

It was enough to earn Messi an unprecedented fourth consecutive Ballon d'Or - even though he only won the Copa del Rey in 2012 for all those goals. 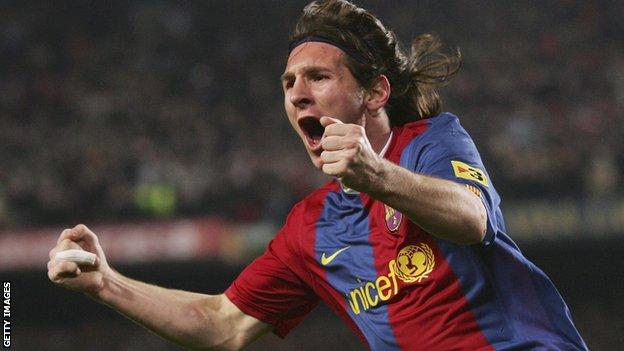 Messi's first career hat-trick came in one of the biggest fixtures in football. The teenager scored all of Barca's three goals in a 2007 Clasico - his first at the Nou Camp - including a brilliant last-minute finish after beating a couple of defenders.

This was arguably the moment he became a household name. 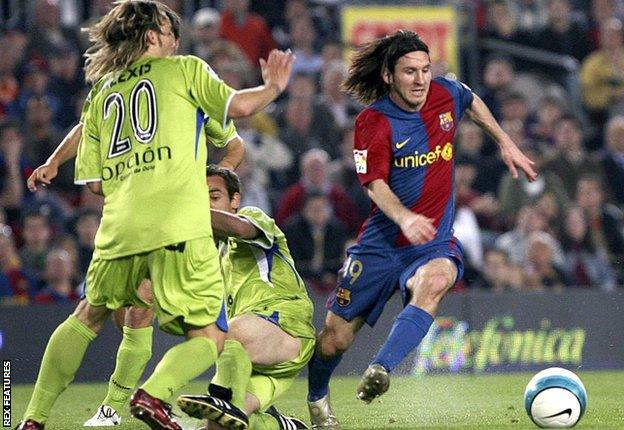 In a goal with remarkable similarities to Diego Maradona's (non-handball) strike against England in the 1986 World Cup, Messi picked the ball up in his own half, beat about five defenders, went round the goalkeeper and then slotted home. 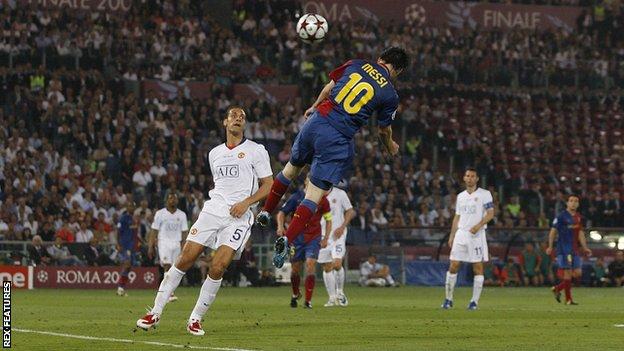 If you can believe it, there was a time when people questioned whether Messi could do it against English clubs in Europe. He had failed to score in 10 Champions League appearances against English sides before the 2009 final.

But there were no doubts any more when Messi rose highest in the box to head home Xavi's cross in his first Champions League final - and the first game billed as Messi v Cristiano Ronaldo.

Two years later he would score in another final win over United - the third of his four Champions League winners' medals.

Messi broke Barcelona's goalscoring record at the age of 24 - the only way he knows how, with a hat-trick.

He equalled Cesar Rodriguez's record of 232 goals with his first against Granada, broke it with his second and extended the record with the third. 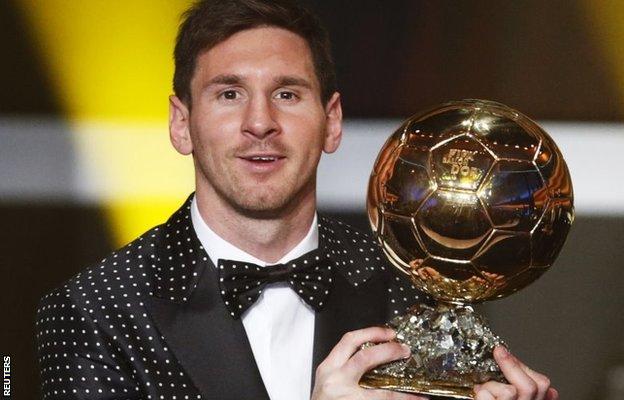 Sometimes a goal almost seems too perfect - and this was one of those. Messi popped up with an injury-time goal against Real in 2017, sweeping home a first-time shot from the edge of the area. It was an El Clasico winner, his 500th Barcelona goal and it sent Barca top of the table (although Real would go on to win the league).

For good measure, he pulled out an iconic celebration when he took off his shirt and held it out so the Bernabeu faithful could see his name. 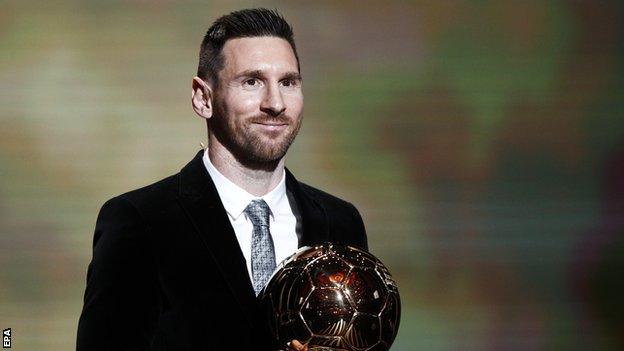 Messi won his sixth Ballon d'Or - a record - in December, taking him above Ronaldo's five after scoring 54 times for club and country in 2018-19.

"I still have beautiful years ahead of me," he said while collecting the award. 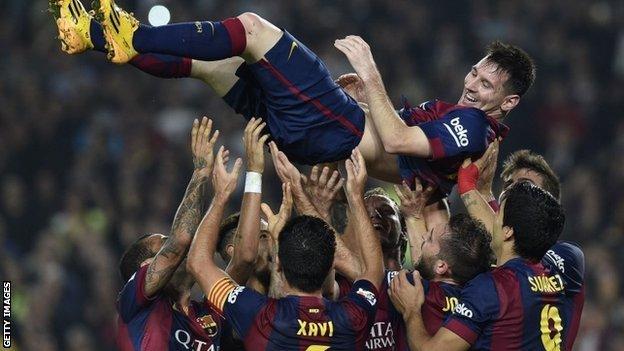 Another goalscoring record broken - and another hat-trick to do it.

Messi equalled Telmo Zarra's 251-goal record with a free-kick, before breaking it and stretching it with a third.

Messi is now on 444 La Liga goals, almost 200 clear of the old record, and more than 100 above Ronaldo - who was on 311 before he left Real Madrid for Juventus.

Messi scored four goals for the first time in his career as he took Arsenal to the cleaners in the 2010 Champions League quarter-final. The pick of the bunch was his chip over Manuel Almunia for his hat-trick.

An honourable mention goes to his five-goal haul against Bayer Leverkusen in a 7-1 win in the last 16 two years later.

He is the second top scorer in Champions League history with 115, behind Ronaldo. 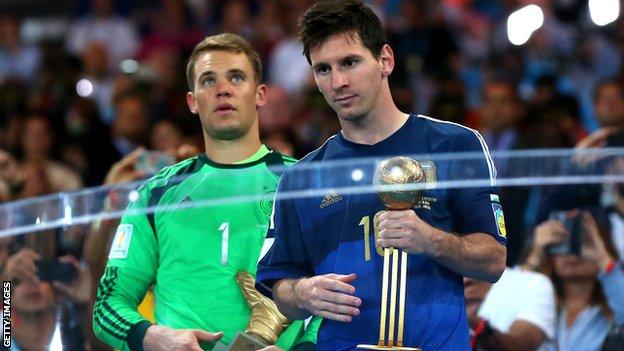 In theory this should have been one of Messi's greatest moments - being named the best player in a World Cup. His lack of a senior international trophy (he won the 2008 Olympics) is sometimes held against him in debates on the greatest player of all time.

But it was a strange decision, with many observers thinking he had underwhelmed in the knockout rounds, having scored four goals in the group stages. He was disappointing too in the final defeat by Germany.

That final defeat in Brazil may be the closest he ever comes to winning the World Cup as they went out in the quarter-finals four years later in Russia, despite his memorable goal against Nigeria.

Messi briefly retired from international football in 2016 after losing in the Copa America final for the third time, and again considered his future after the 2018 World Cup but he is still going.