The Women's Super League and Women's Championship seasons have been ended immediately, with the outcome of the WSL title and promotion and relegation issues still to be decided.

The joint WSL and Women's Championship board has sent various recommendations to the Football Association board to "determine the most appropriate sporting outcome for the season".

An FA statement said the decision came after "overwhelming feedback from clubs" and was made "in the best interest of the women's game".

It continued: "This will also enable clubs, the Women's Super League and Women's Championship board and the FA to plan, prepare and focus on next season when football returns for the 2020-21 campaign."

It means all divisions of women's football in England have now been cancelled for the 2019-20 campaign.

Clubs had been assuming their season would not resume, several sources had told BBC Sport, leaving the 45 remaining fixtures in the WSL - and 36 in the Championship - outstanding.

Monday's joint leagues board meeting came after a formal consultation process with clubs last week. The FA wrote to clubs on Wednesday to seek their formal views on whether to end the season and how to do so.

What is still to be decided? 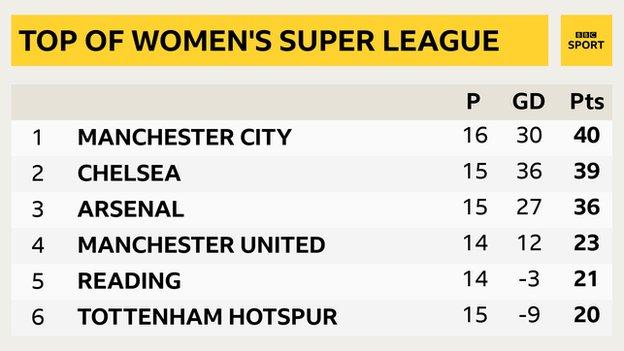 Manchester City were top of the table when the season was suspended in March because of the coronavirus pandemic, although second-placed Chelsea had a game in hand on the leaders.

Should final places in the Women's Super League be decided by an unweighted points-per-game ratio, Chelsea would climb above City to go top.

Also still to be confirmed are England's two representatives to take part in next season's Women's Champions League, which, the FA said in their statement, "would be based on sporting merit" from the WSL season.

At the foot of the WSL, Liverpool remain in danger of being relegated. The Reds are a point below second-from-bottom Birmingham and have played a game more.

Aston Villa are six points clear of Sheffield United at the top of the second-tier Championship.

It is understood no decision has yet been made regarding the conclusion of the Women's FA Cup, which had reached the quarter-final stage before March's suspension of elite football in England.

Manchester City said they "now await the outcome of discussions regarding the final standings of the league table".

On their website, the club added: "While disappointed that we are unable to complete the season, we understand the complexities of the situation and support the FA's decision.

"Our priority remains the safety and wellbeing of our players and staff, and we will now move forward with preparations for next season."

Liverpool said they believed they "would have been able to meet the operational and financial obligations associated with a return to play, once detailed drafts and accurate protocols had been shared with clubs",

However, the club said they now "await an equitable solution to those issues still to be decided in a campaign where a third of our league games were still to be played".

Manchester United were fourth in their first season at WSL level, and said they "understood" and "accepted" the decision to bring the campaign to an early conclusion.

United manager Casey Stoney said: "It's obviously disappointing not to be able complete the season, but it is the right decision for the safety of everyone involved.

"Our focus now moves to our development for next season, which we have been continuously planning for throughout the year, and we can't wait to be back on the pitch again when it is safe to do so."

West Ham United boss Matt Beard said: "While the preference was always to return to the pitch to determine the campaign if safe to do so, we completely understand the unique situation that we, and football, finds itself in.

"As always, the health and safety of our players, staff and fantastic supporters remains the priority at all times."

Bristol City manager Tanya Oxtoby added: "The safety of the players, staff and public is the most important thing and, while it's disappointing that we cannot finish our eight remaining games, we appreciate that a decision has now been made."

Crystal Palace, who were eighth in the 11-team Championship, posted on Twitter: "Obviously a disappointing end to the season but the safety of our players and staff is paramount. We can now look forward to next season with no distractions."