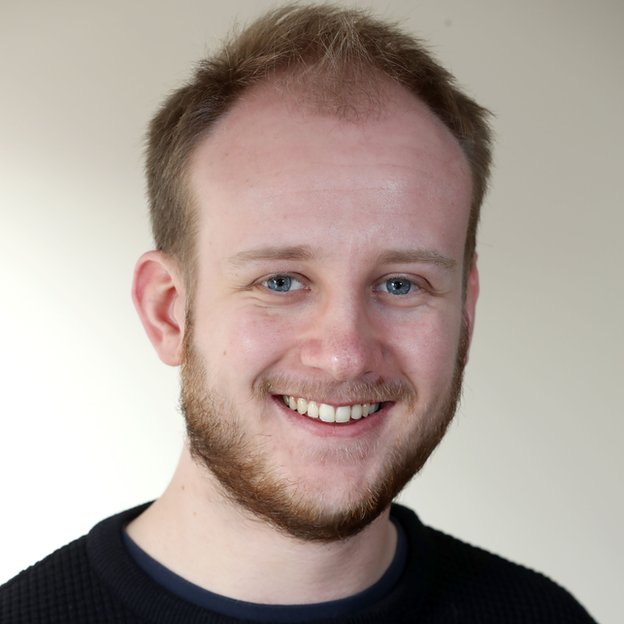 In times of tragedy it can be difficult to find any form of solace.

However, after a period of adversity and darkness, Glentoran skipper Marcus Kane, his wife Aimee and their daughter Mollie are determined to find some light.

At a check-up after 32 weeks of pregnancy, Aimee and Marcus were told their son no longer had a heartbeat just a week before Christmas.

"You don't get told when you are going to appointments that something like that can happen," said 28-year-old Kane.

"It's all fine and rosy going through each stage of pregnancy and then you get hit with a big sucker punch like that."

Harrie is always with us

Harrie Kane was delivered on 18 December, and Aimee, Marcus and daughter Mollie got to spend some precious time with their son and brother at the Bereavement Care Centre at the Royal Maternity Hospital in Belfast.

"We spent some time in the Snowdrop Room and all the staff were so sincere and helpful," added Kane.

"We're so thankful for the memories that they created for us. We've got a big photo album of loads of pictures and we have his handprints all about the house.

"When you see pictures, or look at the memory box which sits at the end of our bed, it's the small things which you can take a bit of light from.

"We got to spend three days with Harrie. Twenty years ago you may only have got five minutes. It's something that has changed and it is continuing to change and I hope we can help by raising awareness."

Harrie's post mortem was conducted at Alder Hey Children's Hospital in Liverpool and his funeral took place on Christmas Eve.

"Because she's so young, Mollie has probably taken it the best on the grief side of things out of all of us," added Kane.

"She is able to incorporate him into her day. She draws him pictures and she has a bear.

"We visited Alder Hey to say thank you to the people who looked after him and they gave us a bear.

"Mollie said that it was Harrie, so he comes everywhere with us now.

"It is hard for us to hear her talking about Harrie because we don't have the imagination of a six-year-old, but she has been amazing.

"Just looking at her and how she has been dealing with it, it just gets me and Aimee through."

Aimee and Marcus decided to raise funds for the Bereavement Centre at the Royal Maternity Hospital and help raise awareness of the tragic situation they had lived through just five months earlier.

The response has been astonishing, with £10,000 raised in the space of a week and #HikeForHarrie being widely publicised throughout Northern Ireland.

"Aimee wanted to do something positive and she got on the ball. She has been amazing," said Kane.

"She has loads of plans, like ballots and fun days, when social distancing fades away.

"People's generosity has been fantastic. We're hoping that we can just keep going."

The Irish League has rallied around the Kane family.

On Boxing Day, Belfast rivals Glentoran and Linfield paused during the festive derby for a minute's applause in memory of Harrie. Spectators, players, staff and officials were all standing as one.

Kane came through the ranks at Linfield before making the move to the east Belfast side in 2012. The moment in the third minute of the game at the Oval was poignant and moving as rivalries were set aside.

Since launching in mid-May, Hike for Harrie has witnessed players, fans, media and family from all corners of the Irish Premiership come together and raise awareness of the Snowdrop Room.

#HikeForHarrie has even reached the USA, thanks to Glens player Jessie Davis and Morgan Day, who was recently dubbed the Queen of east Belfast after a viral twitter storm.

"We want to keep everyone thinking about Harrie. Even if people can't donate, it keeps Harrie in everybody's minds.

"I was a bit gobsmacked by how many people have got involved. The response has been phenomenal.

"We wanted to give back to people who are going to go through the same situation that we went through at Christmas.

"He deserves to have something to be remembered by. It's just nice to know that the wee man is on the league's mind and further afield as well."

Vent in your own way

Kane has since returned to football and has skippered the Glens to an Irish Cup semi-final, which was postponed because of the coronavirus outbreak.

Despite resuming the sport he loves, he still has his struggles and says a big factor in doing #HikeForHarrie is to get exercise and "clear your head".

"I've just started counselling because of what has happened," adds Kane. "However you don't even need to talk about it. When you exercise you vent in your own way.

"It's important to get out and have a bit of fresh air, so when you add in remembering Harrie then it is an added bonus for everybody."

With the football season on hold, Kane is exercising every day until his "knees give way", before joking "that could be next week".

"I'm going to cycle around all the Belfast stadiums," he adds. "I'm going to start at Windsor Park and then go to the Oval, Seaview and Solitude before finishing back up at my house again.

"It doesn't have to be a full marathon or a half marathon and you don't have to do it quickly.

"Just go at your own pace and enjoy the exercise.

"We were at the beach last night and we only walked about 2km. We got to draw Harrie and Mollie's names in the sand beside each other and it was a really nice moment."

"That's one thing we have found out. You have to talk and the worst thing you can do is bottle stuff up," he adds.

"There would be days when I was crying and Aimee was having a good day, and vice-versa. We found if we spent time talking about it, then we were able to comfort each other.

"You don't think that there is anyone who goes through it, but you start getting messages asking if you are OK because something similar happened to them."

Kane says that Aimee has started exercising with her friend who went through a similar experience and that has helped to deal with the grief.

"She was able to speak to Aimee about what she went through, and if anyone is going through something similar I would say just drop me, or Aimee, a message," adds Kane.

"We're willing to talk and explain. It's one of the worst types of grief to go through because we didn't really have a minute with him, he was sleeping when he came out.

"The issue is that it was something that we didn't know about, so it would be nice if someone needs to talk or we can help in any way.

"The money raised and the work from the staff at the Royal Victory Hospital mean that Harrie's legacy can carry on and that means so much to us."

Read more on 'We were wrong': NFL to allow players' protest