Celtic manager Neil Lennon has described leading the club to their ninth Premiership title in a row as his greatest achievement - and has set his sights on a record 10th championship. "These guys have worked with me and they've been absolutely amazing," says Lennon. "But I want more. I don't want to stop now." (Scottish Sun)

Former Rangers striker Ally McCoist says it is unlikely the Ibrox club would have caught Celtic in the title race but feels it's unfortunate that the Premiership campaign could not be played to a finish. "It's through no fault of their own that the season's finished early and they've been awarded the title in this manner," he says. (Daily Record)

Hearts players will back owner Ann Budge should she mount a legal challenge to the club's relegation from the Premiership, according to defender Craig Halkett. "It's a kick in the teeth... of course, we would back any move from the owner, though, which she wants to pursue," he said. (Daily Record)

"Celtic cannot be allowed to win 10-in-a-row, simple as that," says former Rangers forward Derek Parlane. The striker scored 18 goals in the season the Ibrox club prevented Celtic from securing a 10th straight title in 1975. "Rangers have to go out with the attitude that every single match has to be won." (Daily Record) 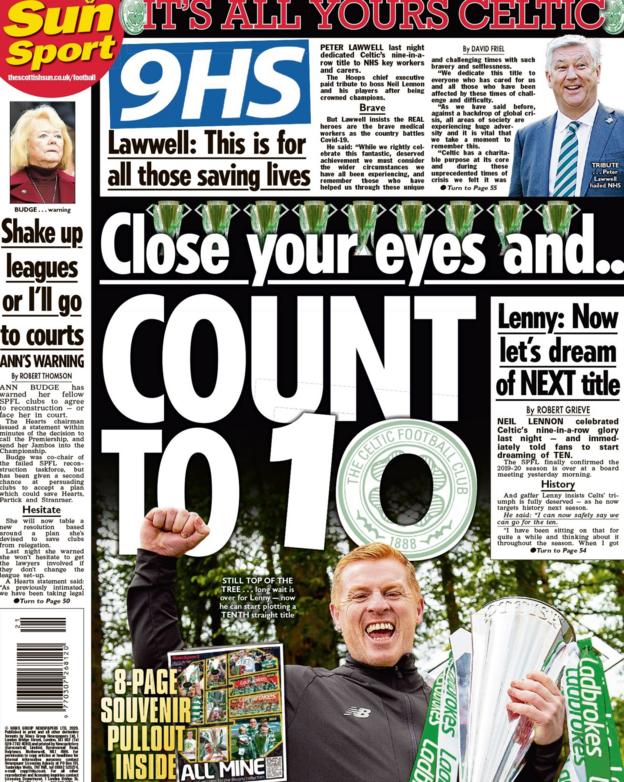 St Johnstone can expect to bank over £100,000 extra as a result of their rise to sixth in the final Scottish Premiership table. Meanwhile, defender Steven Anderson is leaving McDiarmid Park after "a brilliant 16 years and some incredible memories." (The Courier)

Partick Thistle's players are counting the cost of their relegation to League One following news of considerable wage cuts. Ian McCall's first-team squad, who are still under contract for next season, have been informed of cuts as high as 50%. (Daily Record)

Celtic captain Scott Brown says it was only a matter of time before his side clinched their ninth consecutive league title, but expressed a hint of disappointment that they could not try to extend their 13-point lead over Rangers. (The Herald)

Former Celtic manager Ronny Deila hopes Neil Lennon can lead the club to 10-in-a-row. Deila, who secured Celtic's fourth and fifth titles in their run to nine straight championships, said: "Celtic winning 10-in-a-row would be amazing and next year is going to be important. I am sure he [Lennon] is going to drag the club to 10 and hopefully I can be there to celebrate with them." (Daily Record)

Neil Lennon has hailed the impact of Celtic's supporters in the club's latest Premiership title triumph. "Together we have shown that we are a powerful force and once again the best team in the country," he says. (Scottish Daily Mail)