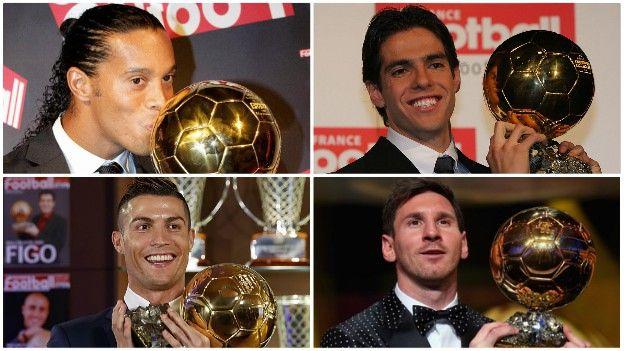 It came down to the question it always comes down to - Lionel Messi or Cristiano Ronaldo?

This week the Match of the Day: Top 10 podcast team of Gary Lineker, Alan Shearer and Ian Wright attempted to rank the best Ballon d'Or winners of the Premier League era - and we asked you to do the same.

The Ballon d'Or has been football's most prestigious individual award since its inception in 1956.

Initially open to Europeans, all players at European clubs became eligible in 1995, before all players from around the world were considered from 2007.

There have been 18 different winners in the Premier League era, with Cristiano Ronaldo and Messi winning it five times apiece between 2008 and 2017.

And perhaps unsurprisingly - and even with the likes of Zinedine Zidane and Brazilian Ronaldo thrown into the mix - it all came down to Messi v CR7.

Here's how you ranked them - and if you still haven't picked your order yet you can do so at the bottom of the page.

Messi succeeded Ronaldinho as Barcelona's biggest attacking threat and the first season he was top scorer (2008-09) they won La Liga and the Champions League, earning the Argentine forward his first Ballon d'Or.

He won it again the next three years, scoring 73 in 60 in 2011-12, and regained it after a fourth Champions League win in 2015. Messi went clear of Ronaldo for a record sixth Ballon d'Or after winning his 10th La Liga title last year. The pair now have over 700 career goals each - and they're not done yet.

Shearer: "The standard that these two have set, they've taken goalscoring to a different level. Look at how many appearances and goals they've had, it's bonkers.

"We're so lucky to live in this era where we're seeing the football these two produce. To get to the top is one thing, but to stay there and have that hunger to keep on performing - I can't emphasise enough the dedication they must have to keep doing it year in, year out."

Real Madrid signed two Ballon d'Or winners for world-record fees in the space of three days as Cristiano Ronaldo joined Kaka at the Bernabeu in 2009. The Portuguese forward had scored 42 in 49 in 2007-08 as United won the Premier League and Champions League.

And so began a personal duel with Lionel Messi, breaking all sorts of goalscoring records along the way, with Ronaldo winning the Ballon d'Or again in 2013 and helping Real win the Champions League in four out of five years. He joined Juventus in 2018, winning Serie A in his first season.

Wright: "He's done it in different leagues and continually pushes himself. His work-rate, his total drive for perfection, to get where he is, I think he pips it as the top man. Even at 35, there's no resting on his laurels. He's an unbelievable role model."

Shearer: "Ronaldo's made himself as good as he is. He's had to work hard, it's probably been more natural for Messi in terms of skill, but they're both staggering."

After winning Serie A and reaching the Champions League final in his first two seasons with Juventus, Zidane helped France win the 1998 World Cup, scoring twice as the hosts upset Brazil in the final.

The midfielder made a world-record move in 2001, scoring a picture-book volley in the final as Real Madrid won the Champions League in his first season, and retired after an eventful 2006 World Cup, winning the Golden Ball and being sent off as France lost in the final.

Wright: "When people say poetry in motion, you watch Zidane and you get it."

Shearer: "He was the best player I ever played against. His balance stood out to me, and his ability to control the ball with either foot. The way he went past people and caressed or 'loved' the ball, was just incredible."

The Brazilian striker spent one scintillating season with Barcelona, scoring 47 in 49 to win the Cup Winners' Cup in 1996-97, before making a world-record move to Inter Milan and winning the Golden Ball at the 1998 World Cup.

Ronaldo recovered from a serious knee injury to be top scorer as Brazil won the 2002 World Cup and became one of Real Madrid's Galactico signings in 2002 before playing for AC MIlan.

Shearer: "Look at the clubs he's played for, and his goalscoring record at PSV Eindhoven and Barcelona. When Bobby Robson came to Newcastle he said he enquired about me going to Barcelona but Blackburn said I wasn't for sale so they signed Ronaldo instead. I think they got a good deal!"

The forward had already helped Brazil win the 2002 World Cup while with Paris St-Germain and then joined Barca in 2003. In 2004-05 he helped them win La Liga for the first time in six years and in 2005-06 they retained the title and became champions of Europe for the first time since 1992.

Ronaldinho later won Serie A with AC Milan (2010-11) and returned to Brazil to win the Copa Libertadores with Atletico Mineiro in 2013, becoming the first man to win both the Ballon d'Or and the South American Footballer of the Year awards.

Shearer: "He had that step-over, where he could go both ways. The whip and bend he put on free-kicks, his balance, ball control and the no-look pass."

Wright: "I remember that game at the Bernabeu, everything he did worked, and they gave him a standing ovation. He is the kind of player that makes the game beautiful."

The Dutch striker joined AC Milan from Ajax in 1987 and won the Ballon d'Or three times in the next five years.

During 1991-92 he scored 29 goals in 38 games in all competitions as Milan won Serie A while going through the league season unbeaten, but a year later an ankle injury ended his playing career at just 28.

Wright: "Fabio Capello said he was the best player he ever coached, he was 'the Swan' (of Utrecht). He was quick, could hold it up, head it, and use both feet."

Shearer: "He was a complete centre forward. There wasn't anything he wasn't brilliant at. And let's talk about that volley - the connection, the technique - it was sensational!"

Merely a squad member as Brazil won the 2002 World Cup, the forward went on to win Serie A in his first season at AC Milan (2003-04) before becoming Milan's top scorer after Andriy Shevchenko's move to Chelsea in 2006.

Kaka scored 10 goals during the 2006-07 Champions League, with Milan beating Liverpool in the final, and in 2009 he made a world-record move to Real Madrid, winning La Liga in 2011-12 while playing a supporting role to a certain Cristiano Ronaldo.

Wright: "That game against Manchester United (first leg) was almost the perfect performance. He scored twice and his overall play was exemplary."

Shearer: "He was so quick, elegant and smooth. He had great vision and scored some unbelievable goals."

The Portuguese winger left Sporting Lisbon in 1995 to establish himself as part of Barcelona's star-studded attack and, after watching team-mates Ronaldo and Rivaldo win the Ballon d'Or, it was Figo's turn after coming to the fore during 1999-2000.

Like Ronaldo, his Ballon d'Or form led to a world-record move, but Figo angered Barca fans by joining bitter rivals Real Madrid to become the original Galactico. His Real stint was equally successful and he ended his career by winning Serie A in each of his four seasons with Inter Milan.

Shearer: "We were comfortable against Portugal at Euro 2000. Then he stepped on the gas and they won 3-2. He went past players like it was easy, effortless. And he had the balls to go from Barca to Real."

'The Divine Ponytail' introduced himself to the world as hosts Italy reached the 1990 World Cup semi-finals. That summer the forward made a world-record move to Juventus and scored 30 in 43 in 1992-93 as Juve won the Uefa Cup.

After scoring five goals at the 1994 World Cup, Baggio missed the decisive spot-kick as Brazil won the final on penalties, before winning Serie A with Juve and AC Milan.

Shearer: "He could play anywhere across the front. He had quick feet and was great travelling with the ball."

Wright: "Toto Schillaci got the goals in 1990 but at that tournament, along with Paul Gascoigne, Baggio was outstanding. He dealt with the pressure of playing in his own country and being their creative player."

The Brazilian forward joined Barcelona from Deportivo La Coruna in 1997 and won the Spanish double in his first season. He then scored 29 in 48 in 1998-99 as Barca defended the league title before helping Brazil win the Copa America that summer.

Rivaldo scored 130 goals in five seasons with Barca, plus another five as Brazil won the 2002 World Cup, before beginning a nomadic end to his journey by winning the Champions League in his only season with AC Milan (2002-03).

Wright: "He was really slight but I thought he was magnificent in the 2002 World Cup final and scored some unbelievable goals at Barca - like that overhead kick against Valencia."

Rank these men's Ballon d'Or winners from one to 10