Saturday was meant to be the final day of the Championship season, yet with elite football suspended because of the coronavirus pandemic there are still nine games left to play - and no conclusion in sight.

So... what should have been happening this weekend?

Would Leeds United and West Bromwich Albion fans have been celebrating promotion to the top flight? Would Barnsley and Luton Town supporters be preparing themselves for a return to League One?

The short answer is we don't know, but here at BBC Sport - with the help of the Department of Economics at the University of Reading - we've had a go at trying to predict what might have happened.

How have we done it? 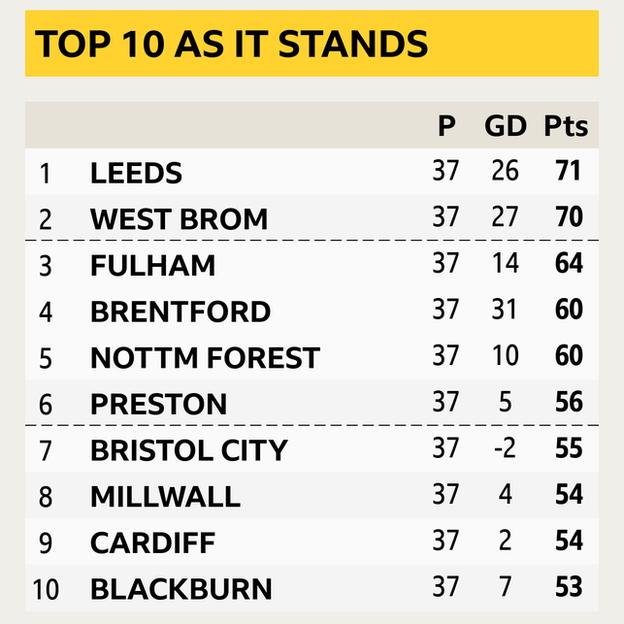 Professor James Reade and his team in Reading have employed the same methods they use to forecast things like inflation or gross domestic product (GDP) to predict the results of the 108 games left in the Championship.

"We look at all the scorelines in the history of football essentially, and that gives us a sense of how likely a team is to score zero, one, two, three, four goals and so on," Professor Reade tells BBC Sport.

"You look back at previous matches and say when a weaker team was playing a stronger team, how many will they have scored if it was this point in the season, if this had just happened, and so on. What that gives us for each team and each match is an expected number of goals."

Professor Reade then uses this expected number of goals to work out the likelihood of either side winning a particular game and runs the model for the rest of the matches in the season - and then repeats it 10,000 times just to be sure.

"It's a bit like playing a computer game, but we do it lots and lots of times, as the more times you do it the more you get a sense of all the kinds of quirky different realities that might have happened - but also what was most likely to happen," he explains.

No big surprises for the title 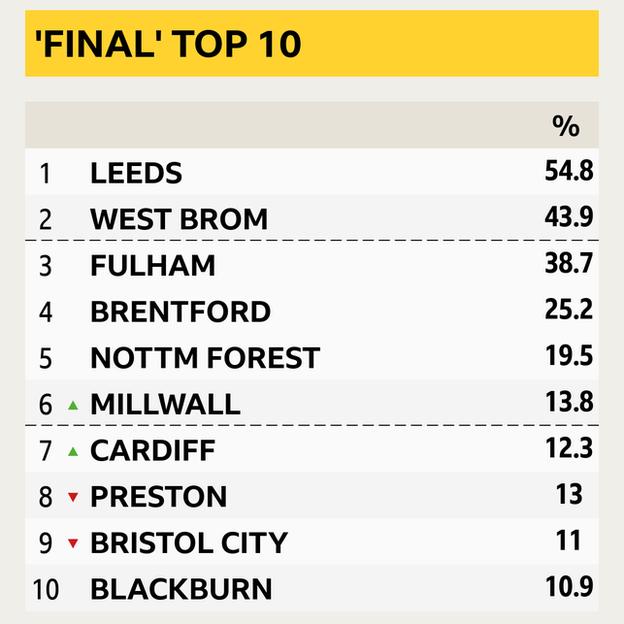 In Professor Reade's 10,000 simulations, Leeds United won the title 54.8% of the time and finished second 35.1%, meaning their chances of automatic promotion were just under 90%.

West Bromwich Albion were likely to finish second at 43.9%, while they would top the table 39.6% of the time.

As you go down towards the middle of the division so the percentages drop as there are more chances that a side could finish higher or lower.

According to the statistics Fulham would stay third, Brentford fourth and Nottingham Forest fifth.

But the simulations have thrown up a surprise for the remaining play-off place. In-form Millwall were expected to jump up two spots to finish in sixth, pipping the likes of Preston North End and Bristol City.

Straight back down for bottom three 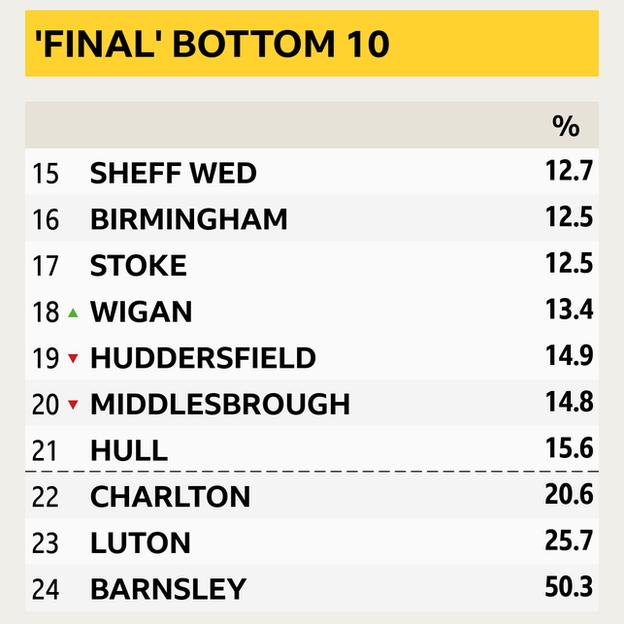 At the bottom, however, there are no such surprises. Barnsley finished last in just over half of the simulations and 85% of the time they go down, while Luton Town and Charlton Athletic joined them.

All three sides were promoted from League One last season and, unfortunately for them, all three were heading straight back down, according to the statistics.

The only big change saw Wigan Athletic jump up a couple of places at the expense of Huddersfield Town and Middlesbrough.

So how will the season actually end?

The official mood music from the EFL is that they are still hopeful the Championship can reach a conclusion, although we're no nearer to finding out how or when this could happen.

With all sides having played the same number of matches, using average points per game will not change the table at all - although that system does not take into account the matches still to be played.

For example, third-placed Fulham still have to play all of the other sides in the top five, a much harder task on paper than Nottingham Forest, whose only clash with another top-five team was that game against the Cottagers, which should have taken place at the City Ground on Good Friday.

Is our system better?

"But equally there's a lot to be said for simple, transparent, straightforward solutions.

"The main difference relative to points per game, which assumes that every team has played an equally difficult set of matches so far, is this allows us to factor in the difficulty of those games that remain."

This system also uses Elo ratings, which allow you to alter how good a side is depending on their results. This means if a lower-ranked side gets wins over higher-ranked opponents, the lower-ranked side's increased form and ability can be factored in.

"Sport, as well as the general economy, is people making decisions, and those decisions have an affect on outcomes," adds Professor Reade.

"All these different decisions taken under pressure lead to particular outcomes occurring and that's the case in sport as well.

"A lot of the ways we think about things in economics are readily applicable in sport, and equally because sport is well measured.

"We have all the data about what goes on - we can observe as economists that this happened when that happened - and so we can put actual magnitude on it."