Manchester United will not be able to buy a player as expensive as Tottenham's England striker Harry Kane, 26, as they rethink their transfer strategy because of financial uncertainty caused by coronavirus. (Guardian)

Former Liverpool midfielder and manager Graeme Souness has warned Manchester United they risk having their "trousers taken down" if they have agreed a deal with Sancho behind Dortmund's back. (Mirror)

What are the Premier League's most iconic celebrations?

Paris St-Germain's 21-year-old France forward Kylian Mbappe, who has been linked with a £250m move to Real Madrid, could be worth as little as 40m euros (£35m) because of the coronavirus pandemic, according to a former member of the European Parliament. (Mirror)

Atletico Madrid's Ghana midfielder Thomas Partey is a target for Arsenal boss Mikel Arteta, but the Spanish club believe they can tie the 26-year-old down to a new contract. (Express)

Arsenal could be priced out of a deal for Thomas Partey after Atletico Madrid offered him a new five-year deal which would double his salary and increase the value of his release clause. (Guardian)

Manchester City have been tipped to join the race for Arsenal striker Pierre-Emerick Aubameyang, with Barcelona, Inter Milan and Real Madrid also interested in the 30-year-old, who is out of contract in the summer of 2021. (Express)

Manchester United have ended their interest in 28-year-old Real Madrid and Colombia midfielder James Rodriguez, but Arsenal and Everton are both interested. (Sky Sports, via Sun)

Manchester City midfielder David Silva, 34, is in talks with former club Valencia as his contract is set to expire on 30 June, but the deal has been complicated by the coronavirus pandemic. (ESPN via Manchester Evening News)

Manchester City's David Silva has named four Manchester United players in the side of the best opponents he has faced in his time in England - Ryan Giggs, Paul Scholes and the Neville brothers, Gary and Phil. (Mirror)

Manchester United fans eager to see next season's kit may have been done a favour by Barcelona, who appear to have accidentally leaked it via an online game of Pro Evolution Soccer. (Sun)

Chelsea are set to miss out on Porto left-back Alex Telles, with Paris St-Germain set to buy the 27-year-old for £21.8m. The Blues will turn their attention to Leicester's 23-year-old Englishman Ben Chilwell as a result. (Gauchazh via Sun)

Napoli's 28-year-oldcentre-back Kalidou Koulibaly, who is a target for Manchester City and has also been linked with Paris St-Germain, says he is more interested in a move to England. (Le10Sport via Sports Illustrated)

Newcastle manager Steve Bruce will be given until the end of the season to prove to the prospective new owners that he can deliver European football, with ex-Tottenham boss Mauricio Pochettino being linked to the Magpies job. (Sun) 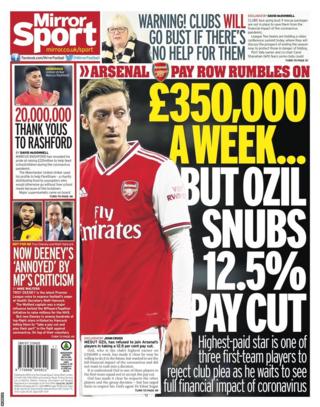 The back pages of Tuesday's Mirror