How do you celebrate a league title win in lockdown?

That is the bizarre scenario facing three clubs in the wake of the SPFL's vote to end the lower league campaign. Dundee United are now Championship winners, Raith Rovers edge to triumph in League One, while newbies Cove Rangers romped to the League Two title.

But with no confetti, street parties or bus parades, what did the players and staff at the trio do to revel in the news while social distancing?

Dundee United's 14-point lead at the top of Championship meant they were crowned champions of the division on Wednesday, ending a four-year absence from the top flight.

With the season's primary objective achieved, sporting director Tony Asghar met head coach Robbie Neilson - at a "2m distance" - for a celebratory, socially-distanced beer in what looked like an abandoned public car park. It's the stuff dreams are made of.

There was certainly no sign of champagne, but that beer might have tasted all the more sweeter knowing that city rivals Dundee's casting vote confirmed United's return to the Premiership next season.

As for striker Nicky Clark, he had to settle for an emoji trophy until he gets his hands on the real thing.

League One is where things get controversial at the top.

While United were some distance ahead of Inverness Caledonian Thistle in the second tier, only a point separated league leaders Raith Rovers and second-place Falkirk. However, with eight rounds of fixtures still to go, Raith claimed the title.

Yet again, there was no bubbly to be seen, but instead a half bottle of Buckfast as Raith left-back Kieran MacDonald took to Twitter to start his lockdown title party.

It is cruel on Falkirk. With eight games left unplayed, including what could have been a potential final-day title decider between both sides, it has left a sour taste in the mouths for the Bairns.

But as expected, social media didn't take an entirely sympathetic approach. Albeit light hearted, Raith midfielder Ross Matthews chipped in with his share as his side reclaimed their place back in the Championship after a three-year absence.

They'll see the funny side, surely...?

'Three in a row' for Cove and Fyvie's reconstruction plan

League Two was - sort of - more straight forward. With Cove Rangers holding a 13-point lead over Edinburgh City in second, Wednesday's decision only brought forward what many saw as an inevitability - that Paul Hartley's men would claim the title.

It is now two straight promotions for Cove as they continue to progress up the Scottish football pyramid after a hugely successful season in League Two which had them at the summit of the table from day one, as club captain Mitch Megginson was keen to point out.

As for midfielder Fraser Fyvie, while everyone else seems to be celebrating with alcoholic beverages or winding up opposition fans, the former Hibs man is busy drafting up a reconstruction plan.

While the 27-year-old expressed his delight at gaining promotion from the fourth tier, he also stated how he feels no teams should suffer relegation due to the financial implications that would follow.

Are we looking at a future SPFL board member? 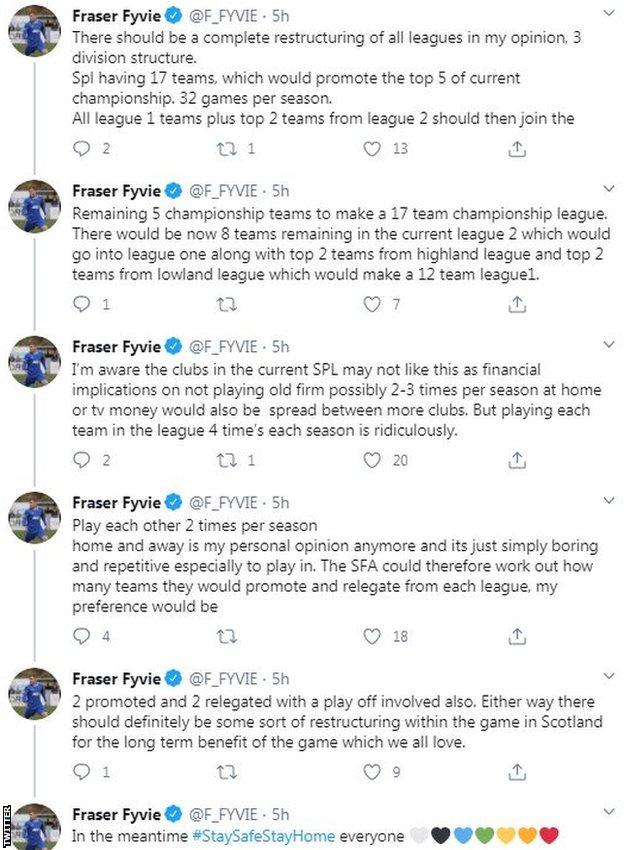