The SPFL board plans to meet again later on Wednesday as Dundee continue to discuss their decisive vote on calling an end to the Scottish season.

The Championship club said on Tuesday they have had "positive discussions" over league reconstruction.

But they failed to clarify if they will back a plan to end the campaign, having retracted their initial 'no' vote.

The SPFL discussed Dundee on Tuesday, as well as Partick Thistle's claim that legal advice rendered the ballot moot.

The nine-strong board - which includes Rangers' chief executive Stewart Robertson - also discussed talked about the Ibrox club's call for SPFL chief executive Neil Doncaster and legal adviser Rod McKenzie to be suspended and their call for an independent investigation.

Dundee chief executive John Nelms and the club's major shareholder Tim Keyes have been in regular contact and these are expected to be ongoing.

One of the many things that remains unclear is who the Dens Park club have held these "positive discussions" about league reconstruction with.

Several prominent Scottish clubs have told BBC Scotland that they have not heard from Dundee.

The SPFL's resolution to call the lower league campaign rests on the Championship club, who are third in the division and say they have their own and Scottish football's interests at heart.

It is unclear at this stage what the league reconstruction would look like, but it is a possible solution that has also been backed by Hearts, who sit bottom of the Premiership, and Thistle, who are bottom of the second tier. 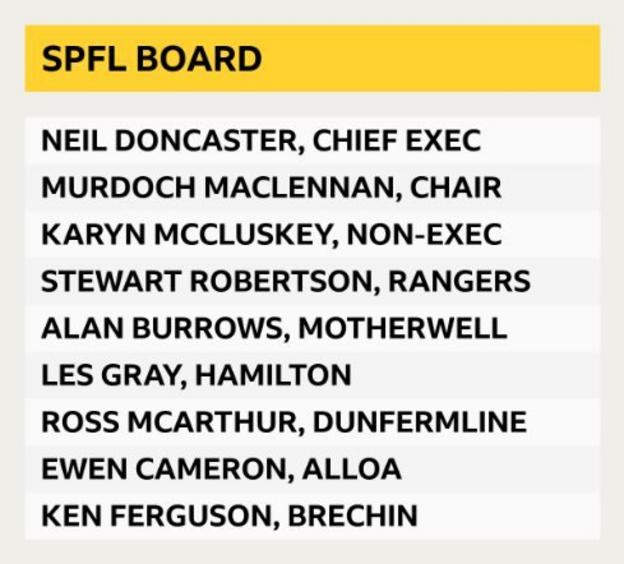