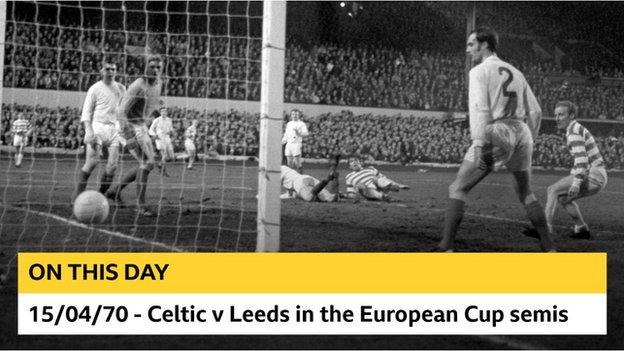 On the day he signed for Celtic, Evan Williams was getting a lift in Sean Fallon's car to a destination he can't remember on an evening he will never forget.

Three years down the road at Wolves and Aston Villa had now given way to a new life in Glasgow for the goalkeeper. It was 1969, he was 26 and glad to be home.

Wherever they were supposed to be going, he recalls asking Fallon - Jock Stein's storied assistant - to swing by St Pat's church in Anderston first that night. He also recalls Fallon's quizzical look.

"I want to see Father Burke."

Before we recount Williams' story of the time, 50 years ago, that Celtic beat Leeds United in the second leg of the European Cup semi-final at Hampden - "they say the crowd was 136,505, but it wasnae, it was 200,000" - we have to go back to Donald Burke, long gone now but a mentor to Williams from boyhood.

The padre was from Cork originally. Loved his God, his football and his horses - probably, but not definitely, in that order. "See when I was 10, he was the priest in Dumbarton where I'm from and he'd say to me, 'You'll play at the top level one day'. And I couldn't get a game in the school team at the time. He was a really good man. A big supporter of mine. So I went to see him.

"Sean sat in the car and I rang the doorbell. You could see him through the frosted glass putting on his cassock. 'What are you doing here?' he said. 'Father, I've come to tell you that I've quit Wolves'. He was raging. He had these big, big eyes and he was going mad. 'What did you do that for! You could have done great down there! That was your big chance!'

"I said, 'Father, hold on, hold on. I've quit Wolves and I've just signed for Celtic'. He got down on his knees in front of me and said a prayer. 'Didn't I tell you you'd make it,' he said, as proud as punch. That's more than 50 years ago, but I remember it well."

The man who replaced Ronnie Simpson is 76 now. He didn't do what Simpson did. Not quite. But don't expect to hear disappointment when he talks about his Celtic years and the near 150 games he played because there isn't any, not really. There's only stories and pride about the best years of his footballing life playing under and alongside some of the greatest talents the Scottish game has ever known.

"We played Benfica in an earlier round that season. I wasn't in the team yet. We won 3-0 at Parkhead and lost 3-0 in Portugal. Famously, the game was decided on the toss of a coin.

"I'm sure I was in the room where they tossed it. They say there was only a few people in there but I have a memory of it. You couldnae get moving for all the dignitaries. We weren't dead sure it it was heads or tails when it hit the floor, but big Billy [McNeill] bent over and shouted, 'We've won!" Imagine that. A coin toss to get into the quarter-final of the European Cup."

Come the next round, Williams was in goal. Celtic did Fiorentina 3-0 in Glasgow and lost 1-0 in Italy. There was a moment when it looked like the hosts had made it 2-0 with a free-kick. Apparently Stein was jumpy in the moment, ready to swing for his goalkeeper for barely moving as the ball whizzed by him.

Williams said he had the situation under control. "I knew it was an indirect free-kick and they hit it first time so it was never standing. I think myself and the ref were the only two who knew the story. I went to Big Jock afterwards and I said, 'Boss, the ref just said well done to me for knowing the rules'. He said: 'I'll rules you! You're gonna give me nightmares'."

'I went through Charlton... I was quite pleased'

In the eyes of the bookies, Leeds were the coming force of British football. In the eyes of the English media, Celtic were a fading power, fortunate to get past Benfica and unlikely to live with Leeds, who'd scored 24 goals en route to the semi-final and had conceded none.

Celtic, it was written, had played 14 European Cup games since the glories of Lisbon and had won only five. All of this put into evidence of why Leeds were going to win this tie.

"That was the chat, aye," Williams recalls. "We were unbelievable, though. See the likes of Tommy Gemmell? You couldnae buy him now. He scored dozens of goals from full-back. Scored in two European Cup finals. I had Billy in front of me. Brilliant. I had my words against him, no doubt about it. I'd give him a row. But he was an unreal player and captain.

"I heard all the talk about Leeds being the favourites and I thought, 'Is that right, aye?' Even when I was at Wolves, that's all you got in the papers - Leeds United. The best team around. They didn't talk about Celtic, but I looked at Leeds and thought, 'Celtic are away ahead of this lot'.

"I'd played against them once for Wolves. I was only young. There was a corner. Johnny Giles put it in, Jackie Charlton stood on my foot and stuck it in the net. I said, 'I'm not falling for that one again'. So, down at Elland Road when they got their first corner, Jackie comes up again and, when the ball is in the air, I go and whack him. I went right through him. I was quite pleased."

'You couldn't get out of the station'

Then, it was Celtic. And literally the day after the Celtic game, Leeds went to London to play West Ham. Seven of the players that started at Elland Road turned out again the next day at Upton Park.

By then, they knew what they were up against in the Scottish champions. George Connelly had given the visitors a 1-0 advantage after the first leg. Leeds were lucky it wasn't two or more. Terry Cooper, the full-back that Revie had called the best in the world only a few days before, had been Jinkied. Cooper did an interview later and he said he'd never played against anybody like Jimmy Johnstone before in his life.

They returned to a heroes welcome. "You couldn't get out of the train station," Williams says. "You'd think we'd won two World Cups at the one time. Football has a habit of kicking you, though..."

Celtic lost the Scottish Cup final to Aberdeen. "We got nothing from the ref. There were some terrible decisions in that match and we lost 3-1. It was terrible, so it was. Jock was going daft."

The big one came on 15 April, when a European record crowd squeezed into Hampden to watch the second part of the Battle of Britain. "I know what the official number is but it was way more than that," says Williams. "We'll never know how many, but it wasn't 136,000. Those are the games you want to play in. The noise!"

Billy Bremner's early rocket levelled the tie at 1-1. "See what happened, there was a wind that night. No, seriously. The wind came up just as the wee man let it go. I never seen it. He hit it that early, he caught everybody out. Was I worried? No. Look who we had. What would I be worrying about?"

Goals from John Hughes and Bobby Murdoch put Leeds to bed and Celtic headed for Milan for a final against Feyenoord. Williams calls his experience at the San Siro both his best and worst memory as a Celtic man. It was a glorious occasion and he played exceptionally well, but they lost when they were expected to win. In going down 2-1, they let history slip through their fingers.

The Coronavirus might scupper it but there was a trip arranged to reunite with some of the Feyenoord players and Williams and a few of his mates from 1970 were going to be on it. "I don't know if it's happening, but it would be nice if it did. Those Feyenoord lads were good guys. Bad memories but good memories as well. When are we making another European Cup final?

"I cherish it even though we lost. Don't worry, I won plenty. Leagues, cups, the lot. It was my privilege to play with and get to know those Celtic boys, to say I was a player under Jock Stein. I'm a lucky man to have those memories."