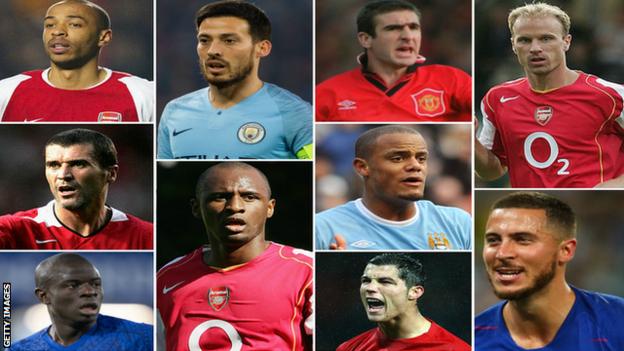 European players are often credited with helping to revolutionise the Premier League.

But just who did you rank the best European to feature in the Premier League era?

After the subject was discussed by Gary Lineker, Alan Shearer and Ian Wright in the latest edition of the Match of The Day: Top 10 podcast, we asked you to have your say.

Not the sort of forward to outmuscle a defender in an aerial duel. But then again he really didn't need to bother. When it came to dribbling, pace, power, movement and finishing, Thierry Henry had it all.

Henry's brilliance was almost as disorientating for commentators as for opposition defenders, who were often left sat on the turf as he accelerated clear to score and take the acclaim of supporters.

A member of the Gunners' 'Invincibles' side, Henry won two Premier Leagues and two FA Cups before heading off to Barcelona and New York, rejoining Arsenal briefly on loan in 2011-12.

Wright: "From 2001 to 2006 he was unplayable. When you watched him he was the Michael Jordan of football at the time. When you looked at him as a footballer he was a beautiful thing to watch."

Shearer: "He didn't score in his first eight games but he found the back of the net after that didn't he?

Described by some as a 'show pony' early in his Manchester United career, it took time for Cristiano Ronaldo to find his best form at Old Trafford.

However, once he did, he was transformed into a goal-machine as he set himself on the way to becoming arguably the finest footballer of his generation.

The quick feet, blistering acceleration, aerial prowess and ability to score outstanding goals were all a feature of his final two seasons at United, where he won the first of five Ballon d'Or titles, as well as three Premier League crowns, an FA Cup, two League Cups and a Champions League winner's medal.

Wright: "When you look at Ronaldo at Manchester United you saw a prelude of what was going to happen at Real Madrid. Those last two seasons at United are why he has to be high up the list.

Shearer: "He was on his way to superstardom at Manchester United. He wasn't afraid to go in there and wear that number seven shirt when you consider the players who wore it beforehand like Cantona, [David] Beckham, [George] Best and [Bryan] Robson."

A supremely gifted player, Dennis Bergkamp arrived at Highbury in the summer of 1995 after an underwhelming two-year spell with Inter Milan in Serie A.

And over the next 11 years he went on to more than repay a then club record fee of around £7.5m paid for him.

The Netherlands forward won two Premier League and FA Cup doubles, as well as a third league title in the 'Invincibles' season and another two FA Cups while at Arsenal.

His goal against Newcastle in 2002 - one of many that underlined his technical brilliance - was voted the best goal in Premier League history by BBC readers in 2017.

Wright: "He was a massive signing for Arsenal and he's the one that all the success was built on. He was magnificent and is the best signing the club has ever made. He changed the DNA of the club. It was a real honour to play with somebody of that calibre."

Shearer: "He was a magnificent player. He meant that goal against Newcastle all day long."

Eric Cantona's surprise transfer from reigning top-flight champions Leeds to Manchester United in November 1992 proved the catalyst for the Red Devils to end their 26-year wait for the title in the Premier League's inaugural season. And it also kick-started a period of unprecedented success for the club.

The creator and scorer of important goals, Cantona relished the big stage with his trademark upturned collar, copied on playing fields across the country.

He won four Premier League titles in five years before retiring at the age of 30. However, his time at Old Trafford was not without incident, his infamous kung-fu kick on a Crystal Palace supporter in January 1995 led to an eight-month ban and almost a prison sentence.

Wright: "When you hear Sir Alex Ferguson talk about Cantona and the impression he had on all the players coming through and what they went on to achieve, you can't put a price on that kind of professionalism. You are talking about someone who was the ultimate talisman in a football team. He had such an aura about him."

Shearer: "If you are going to play with your collar up you have to be some player and he was."

Roy Keane joined Manchester United from Nottingham Forest in 1993 for a then British record transfer fee of £3.75m.

A key component of two double-winning sides, the Republic of Ireland midfielder captained United during their treble-winning season in 1998-99.

Respected by team-mates and opponents alike for his demanding nature and range of skills, Keane is widely regarded as one of the best midfielders to have graced the Premier League.

Wright: "For me he was the best captain in the Premier League. When you look at what he did with the 'Class of 92', the great players around him, the consistency of his performances, without compromising what he was about, and his morals, I have so much admiration for Roy Keane.

"I have never seen anyone who loves football and speaks about it as much as he does."

Shearer: "He was an incredible player. Kenny [Dalglish] thought he had him at Blackburn in the summer of 1993. A deal was almost done but he changed his mind and went to Manchester United."

A ruthless midfield enforcer, Patrick Vieira's talent for breaking up attacks at one end of the pitch and then scoring at the other end was critical as the Gunners claimed a Premier League and FA Cup double in 1997-98.

A rangy physical player, few got the better of the French World Cup winner, particularly during his time with Arsenal where he became captain and led the side that went unbeaten through a 38-game Premier League season to win the title in 2003-04.

Wright: "We have not seen a midfielder before and since that plays like Vieira. When he came I thought he was a centre-half. Once he started playing, his technical ability, stamina, creativity, leadership it's no surprise someone like him went on to play in a World Cup-winning side."

Shearer: "What a signing he was for about £3.5m. He was a brilliant player and as hard as they come. He could have a scrap with you but he could play as well. He was horrible to play against."

Nicknamed 'Merlin' by Manchester City supporters, David Silva has spent the last decade terrorising Premier League defences with his intelligence, movement and ability to deliver the deftest of passes.

A talisman for many of those years, there have been few finer sights than Silva in full flow orchestrating City's attacking play.

While the Spaniard is set to leave the club this summer, he has won the Premier League four times, the FA Cup twice and the League Cup on five occasions. Not a bad return.

Wright: "You can't question how integral he has been to Manchester City and he is a World Cup winner."

Shearer: "He has given 10 years of unbelievable service to Manchester City. What an attitude and what a player."

A good reader of the game, Kompany's pace and aerial ability made him a formidable opponent for many Premier League forwards.

A big player, for the big moments and an inspirational captain.

Wright: "I'm not sure what you can say about him other than he was an exemplary leader of that football club and one of the best centre-backs we have seen in the Premier League."

Shearer: "It's really difficult to come back time after time with the injuries he had and that says a lot about his character."

When it comes to entertaining a crowd, few can match Eden Hazard.

A hot property who had his pick of clubs when leaving Lille in 2012, the Belgian was mesmeric at times during his seven seasons with Chelsea.

Almost unstoppable, when facing goal with the ball at his feet, Hazard won the Premier League and Europa League twice, the FA Cup and League Cup before departing for Real Madrid in the summer of 2019.

Wright: He could not do any more for Chelsea. He was somebody who, when it wasn't going well, could do something that would turn the game on its head for them.

Shearer: Teams used to double up on him which created space that other players could exploit. The way he carried and travelled with the ball.

N'Golo Kante was far from a household name when he arrived at Leicester from Caen prior to the start of the 2015-16 season.

But by the end of it, his supercharged performances had grabbed the attention of the Premier League as the Foxes defied all the odds to win the title. His reward was regular inclusion in the France squad and a £30m move to Chelsea, where he collected a second title in as many years.

Superb at shielding a back four, Kante has since played an integral role in Les Blues World Cup triumph in 2018.

Wright: "Kante was like two players in one (at Leicester). Not only was he able to sniff out danger, see danger and stop it, he was able to get them going forward. It's baffling to see what Maurizio Sarri did to him at Chelsea."

Shearer: "I don't think I have seen a guy cover as much grass as Kante has. At the end of games I have looked at him and he doesn't even look like he's sweating. It's staggering how he is able get up and down and the fitness he shows."

You can still rank the players here...

Ten legends, but in which order?