Nigerian striker Odion Ighalo, 30, will have to take a £200,000-a-week pay cut if he wants to turn his loan move to Manchester United from Chinese Super League side Shanghai Shenhua, where he was on £300,000 a week, into a permanent switch. (Star)

'Clubs at every level are at risk'

Chelsea will have to pay £5m if they want to sign Derby County's 19-year-old English midfielder Max Bird, who impressed Blues boss Frank Lampard when he was manager of the Championship club. (Football Insider)

Real plan to keep 22-year-old Serbia striker Luka Jovic, who has attracted interest from the Gunners. (AS - in Spanish)

Croatia midfielder Ivan Rakitic, 32, has criticised Barcelona's treatment of him and says he refused to move to PSG last year as part of a deal to bring Brazil forward Neymar, 28, back to the Nou Camp. (Mundo Deportivo - in Spanish)

France forward Ousmane Dembele, 22, is set to stay with Barcelona because no club is willing to meet his 60m euro (£52.3m) asking price. (Marca) 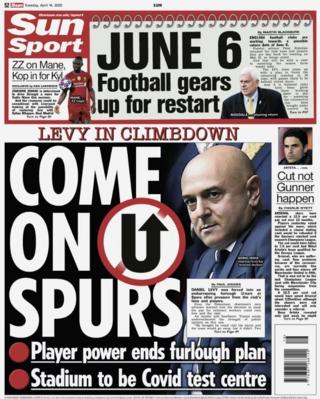