Borussia Dortmund and England winger Jadon Sancho, 20, is not interested in joining Chelsea, leaving Manchester United in pole position for his signature, although Real Madrid is still an option. (Diario Madridista - in Spanish)

Chelsea will make a second bid for Napoli and Belgium playmaker Dries Mertens. The Blues made an offer for the 32-year-old in January and were turned down, but Mertens has yet to sign a new deal with his Italian club. (Gazetto dello Sport - in Italian)

Roma are reluctant to meet Arsenal's £22m asking price for midfielder Henrikh Mkhitaryan. The Armenian, 31, is on a season-long loan at the Serie A club. (Calciomercato, via Star)

However, Inter vice-president Javier Zanetti believes Martinez will remain with the club. (ESPN)

Meanwhile, Inter Milan and Uruguay defender Diego Godin is likely to move to the Premier League in the summer. Manchester United and Tottenham are interested in the 34-year-old. (Tuttosport - in Italian)

Spurs chairman Daniel Levy could block any move for Chelsea and Brazil forward Willian, says ex-England defender Danny Mills. The 31-year-old previously turned down a move to Spurs in 2013 after passing a medical there. (Football Insider)

Southampton manager Ralph Hasenhuttl has agreed a deal in principle to remain at the club for three years. (Sun)

Arsenal are trying to save about £25m by cutting player wages if they do not qualify for the Champions League. (Telegraph - subscription required)

West Ham United and England midfielder Declan Rice says he would love to play alongside Chelsea midfielder Mason Mount again. The duo, both 21, were involved in Chelsea's academy set-up. (Copa90)

Arsenal goalkeeper Emiliano Martinez says he is "open" to a move away from Emirates Stadium. The 27-year-old Argentine suggested that he and Manchester City striker Sergio Aguero could return to their boyhood club Independiente. (TNT Sports - in Spanish) 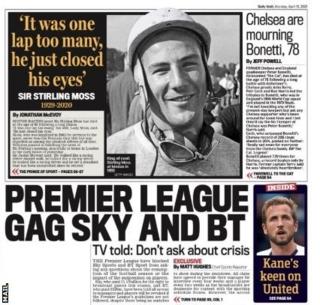