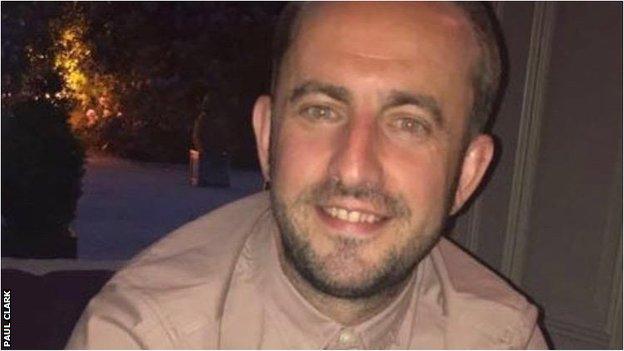 "Being on the ventilator, they tell you that you could go into this but possibly never wake up - it just really hit home."

The Aberdeen youth academy scout feared the worst as he himself lay in ICU at Dundee's Ninewells Hospital.

"A lot of people don't realise how real it is until it hits home," he says.

Two-stone lighter but recovering back home, father of two Clark tells BBC Scotland that the virus continues to cast a shadow over himself, his nurse wife, Lori, and their family.

"I've got a family member still in the hospital with it, my uncle," he reveals. "He was in the bed next to me during the whole time in ICU. He is now back to one of the Covid wards, which is great."

Clark, who suffers from asthma, started feeling unwell last month and decided to seek medical advice after experiencing an increased shortness of breath, a tight chest and high temperature.

He admits that, although he guessed it was Covid-19, he thought: "I might go into hospital, it might just be a couple of days.

"I didn't ever think of the severity of what it would be or what it would lead to. Until you are hitting high dependency, then you are in ICU."

Having tested positive, the NHS Tayside electrician and lead scout for the Aberdeen Youth Academy in Dundee spent nearly three weeks in hospital.

Starting off in Ward 42 at Ninewells, Clark was moved to the high dependency unit as his condition deteriorated - then to intensive care, where he spent five days on a ventilator.

"I think it was just long days and long nights for the first wee while and obviously, when you start hitting the high dependency, you start thinking 'this is quite scary now you know'," he recalls.

"I hadn't seen my wife and my two boys for coming up to a week. I was FaceTiming them, but I started to get to the stage where my phone went off and I didn't even want my phone.

"I just didn't have the energy - that was when it started to hit home that I might not come out of here. I was just really really scared that I might not see them again. The whole going in and not being able to say 'cheerio' - that is what kept going through my head.

"Some of the nurses were constantly holding my hand. It just means so much to me. I just want to thank every one of them for the care they gave me and I will make sure I will be going round individuals just to say thank you."

Clark's health eventually started to improve and he was discharged from hospital on 1 April.

"When I spoke to my wife to say I was coming home, I can't even remember what the feeling was like, it was so emotional when she came to pick me up with my two boys," he says.

Thinking of the Prime Minister's plight, Clark believes his own story is proof that no-one is immune - and that it can be overcome.

"But if people just adhere to what the rules are then hopefully this can come down and we can now get on and get back to our own lives as such. I know it will take time for myself."