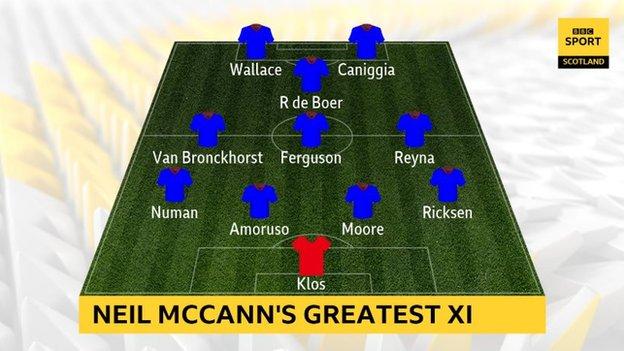 Former Hearts, Rangers and Scotland winger Neil McCann looks back on his career and selects the best 11 players he played with.

This wasn’t tough because I believe he was that good. Klos was a different animal to what I had ever seen in terms of sheer steeliness, will to win, professionalism. He was just horrible in terms of training. You wouldn’t go near Stefan in training even if the challenge was 60-40 in your favour. He wasn’t the best kicker in the world, but as bravery and shot-stopping goes he was unbelievable.

I’ve never seen anybody burn with such energy. Fernando just didn’t stop. We used to say to him he must have had a bowl of Smarties for his breakfast, he was just bouncing. He was a fierce competitor, and a brilliant team-mate. You want someone to be tenacious in the full-back area, a good defender but plenty of energy going forward so he gets the nod ahead of Jackie McNamara.

At the time when we were going toe-to-toe with Celtic, you needed strong men that liked to battle. Celtic had Bobo Balde, Johan Mjallby, Henrik Larsson was terrific in the air, John Hartson, Chris Sutton – just big, physical guys. So you needed to look at your team-mates and know they could battle.

As a partnership Moore and Amoruso were outstanding, but different. Amoruso was physically imposing, but could play. Moore was aggressive, bordering on nasty, but a calming influence as well and was one of the guys Klos could roll the ball to and he would find a midfielder.

One of the best I’ve ever played with. A great captain and leader. He was very calm and used the ball well and about training and the dressing room, as a professional, he was top class. Dick Advocaat put Barry Ferguson in to room with Arthur to get him into good habits.

This was a really tough decision. You could pay Claudio Reyna anywhere, and he wouldn’t do anything too fancy but he was just a brilliant footballer. He had a knack of drifting past people and he played a huge part in winning us back-to-back titles. He played right-back at times for us as well and didn’t look out of place.

Giovanni had a fantastic left-foot, a thunderbolt of a shot and he was powerful despite not being big built. He was just a wonderfully gifted, balanced footballer.

Fergie was the central figure in that midfield. Barry would take the ball anywhere, under enormous pressure. He was brave, I’ve seen him bossing Lothar Matthaus when we played Bayern Munich in the Champions League, and he was just a winner.

As a winger myself it’s strange not to have any in the team, and I played with Andrei Kanchelskis and Theo Walcott. But I’ve gone for one in behind the two because I like to have two strikers. I think Rangers got Ronnie on the down because his knee was shot to pieces. So what he must have been like at Ajax and Barcelona is scary. He was as strong as a bull, so powerful to hold people off and he scored some great goals for us.

I’ve gone for Wallace because he was the deadliest striker I played with in terms of finishing half-chances. Rod had the ability to find spaces and was in the right place at the right time. He was in his early 30s when I was at Rangers and after training he would put discs down and do fast feet finishing drills. The amount of goals I saw him score just with these five, six-yard bursts to get in front of people was no accident.

Claudio was an athletic specimen. I wouldn’t even hazard a guess at how many cigarettes he smoked a day. But he was just absolutely shredded, and over 10 or 15 yards he was electric. He was so calm, and went ice cool in and around the box. I know Maradona talks about him in his book as an animal, and he always found space. Claudio would make this noise when he wanted the ball, and he would control it with his studs first and roll it. Every time. He was just brilliant.