Arsenal are confident of agreeing a deal to sign Scottish Bournemouth winger Ryan Fraser, 26, when his Cherries contract expires in the summer. (Teamtalk)

Ajax midfielder Donny van de Beek has said that a deal to join Real Madrid is not done. The 22-year-old Dutch international is also being pursued by Manchester United. (Helden via Mail on Sunday)

Leicester Algerian forward Islam Slimani, 31, is being linked with a move to Sporting Lisbon after failing to make an impression with the Foxes. (O Jogo, via Leicester Mercury)

Arsenal could attempt to sign Manchester United England midfielder Jesse Lingard, 27, before next season, especially if the loan move of Spanish midfielder Dani Ceballos, 23, to the Gunners from Real Madrid is not made permanent. (Athletic, subscription required)

Everton's English defender Jonjoe Kenny, 23, wants to stay at Schalke next season after enjoying his loan spell in the Bundesliga. (Bild, in German)

Rangers have already lined up a list of replacements for Colombian forward Alfredo Morelos, 23, who is wanted by a number of clubs in Europe. (Goal, in Spanish) 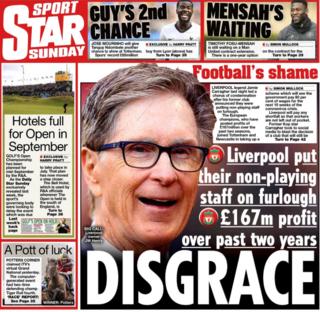