Kylian Mbappe was deemed not ready to make the cut, despite being marked out as a future superstar. Instead, Odsonne Edouard - 11 months older - was chosen to carry the hopes of a nation.

It was a bold call from coach Jean-Claude Giuntini, and the striker did not disappoint. A star was born as France swept to glory at the Under-17 European Championship five years ago.

"At the time, Mbappe was in construction," Giuntini says. "We needed to give him time to bring him in calmly at international level. But for an under-17 player, Odsonne had impressive emotional control, especially in front of goal."

Here, Giuntini, who has spent the past decade in charge of the French national youth sides, tells BBC Scotland about his role in the making of the Celtic striker.

'Bringing out his hidden qualities'

Euros success was the crowning achievement of the four years - from under-16s through to U19s - that the pair worked together.

The Edouard who first joined the national set-up was an unassuming, shy teenager with a prolific scoring record in the Paris St-Germain youth academy.

His potential was clear to Giuntini after one training session. A natural finisher, with the temperament to match. For some strikers, missing chances clouds the mind, sows doubts and brings a tension to the muscles when the next opportunity falls their way.

Edouard simply refused to be flustered, and that cool-headed prowess has been a key factor in his haul of 28 goals for Celtic before the season was halted, and 62 in 126 games for the Scottish champions overall.

The building blocks of a top-class striker were in place. Giuntini relished the task of fleshing out that skill set, as well as broadening his tactical understanding, and he found the pupil eager to learn.

"With the France team, he realised all the things - physical and mental - he had to do to become more complete at international level," the 63-year-old says. "He worked hard and his 'hidden' qualities appeared.

"He developed his athletic potential and his tactical range. Especially regarding the diversity of his moves on the pitch - ball retention, the ability to be unmarked to receive possession to his feet and deep in the opposition half.

"He also improved in the collective side of the game - preparation of offensive moves, defensive press, ability to come back and defend."

From silent assassin to joker in pack

Those improvements came to the fore at the Under-17 Euro finals in Bulgaria.

A Scotland side featuring the likes of Robby and Ross McCrorie, Harry Souttar and Glenn Middleton were the first casualties of the striker's excellence that summer, Edouard netting the second in a 5-0 trouncing.

That sparked a personal goal glut that carried France to the trophy, Edouard's shyness melting away as he went on to be named player of tournament and finish as top scorer with eight goals in six games, including a hat-trick in the 4-1 rout of Germany in the final.

Edouard was lavished with plaudits, but he steadfastly stressed the group effort, saying: "It's a massive pleasure to be a European champion. It's very satisfying to be top scorer, but more so because we won the competition. The honour is down to the work of everyone in the team." 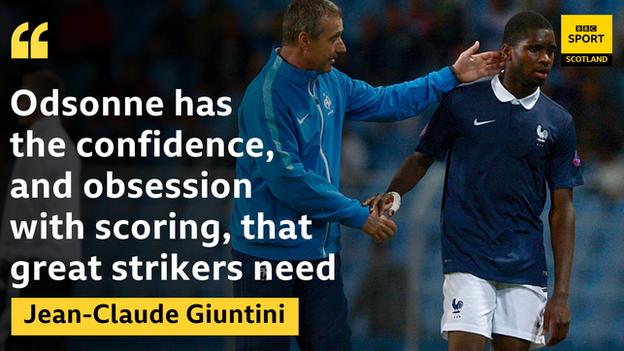 Giuntini noticed the striker coming of age on and off the pitch.

"At the beginning, Odsonne was a bit quiet then he became more and more open, with a jokey and mischievous side.

"He had the confidence and the obsession with scoring all great strikers need. He never doubts his qualities. But this behaviour can create panic - for the opposition defenders.

"He had an excellent sense of anticipation which gave him a remarkable ability to read play. And he had a considerable skill for shooting - his efforts were targeted, precise and powerful."

'He needed to get away from France'

Six months later, Edouard was voted PSG's youngster of the year by his peers in the Ligue 1 superpower's academy.

But a first-team breakthrough never materialised and his club career didn't follow the same upward trajectory as his international exploits.

A season on loan at Ligue 1 rivals Toulouse was aborted when Edouard was charged with - and subsequently found guilty of - shooting a passer-by with an airgun fired from his car.

Just as a career of huge promise looked in danger of going to waste, Celtic stepped in to offer an escape route in summer 2017.

"It is always complicated for a young player to leave his reassuring environment," he says. "But Odsonne probably needed to go elsewhere for new challenges in a different context. Moving to Celtic helped him to grow up.

"He is performing very well and feels loved by the Celtic fans. I feel very happy for this endearing boy."

'Regular football must be his priority'

With two years remaining on his Celtic contract, Edouard's future beyond this season is uncertain.

His record in Glasgow - and 11 goals in just six appearances for France Under-21s - has reportedly attracted interest from some of Europe's biggest clubs.

Giuntini believes the player's continued progression can lead to full international honours in a France squad stacked with world-class forwards, such as Mbappe and Antoine Griezmann.

And while the suspension of football gives Edouard plenty of time to mull over his plans, his former coach sees no reason why he should be in a rush to leave Celtic.

"The most important thing for Odsonne is to keep playing regular football," Giuntini says. "He needs to accumulate confidence and maturity to keep up his improvement.

"A call-up to the France squad would be wonderful for him. He must and can still improve - because this last step is the most difficult."