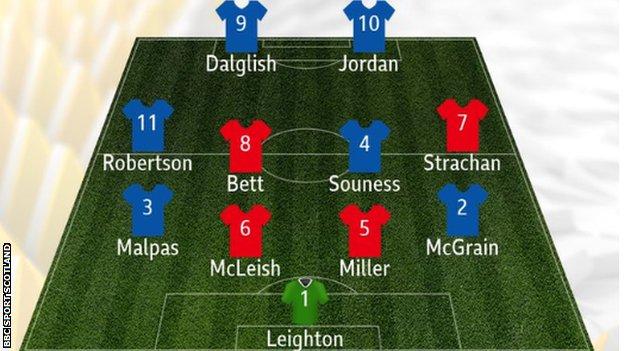 Former Aberdeen and Scotland defender Willie Miller looks back over his career and picks the best eleven he has played with.

He might have struggled these days with the expectation that play should start from the goalkeeper's feet because that was one of the areas he wasn't particularly good at, but as far as being a goalkeeper between the sticks - making crucial and important saves – then he was superb.

I played with Stuart Kennedy at Aberdeen and Richard Gough for Scotland, but the one who was world class – or certainly approaching it – was Danny McGrain. To be privileged to play alongside him at international level was just a joy.

Great on the ball, great going forward, his use of the ball was magnificent, very creative, good defensively.

I presume I'm in the team, which has a very important impact on the choice. Because if you took Alex and I as individuals then yes we were pretty good. But if you put the two of us together then that was the bedrock of Aberdeen and for the international team for a long period of time.

The first half of his career he was that typical centre back in that he would go and win high balls, taking care of the big tall striker. As he became more mature he became a much better player, particularly his use of the ball going forward.

We're blessed with left-backs these days, but back in the day we weren't. It was players who could play in a number of positions who ended up at left-back. Maurice Malpas was that kind of utility player as well. I played a number of internationals with Maurice to the left hand side and he was very reliable, a very cultured player, very thoughtful. His use of the ball was great. Not the most vocal on the park but very trustworthy.

When Graeme Souness and I played together we didn't see eye-to-eye on a number of aspects of the game. For one thing, Graeme did not think he should be picking up a player running on top of the defence - that was the defenders' job. But, that didn't take away from the fact that he was a magnificent player.

His early days at Aberdeen weren't particularly fruitful, but once Alex Ferguson got him playing the way he wanted him to play he was absolutely magnificent.

Wee Gordon used to say in the dressing room 'See this game, I'll be finished by 30.' He ended up playing until he was close on 40 after he started eating those bananas!

The vision, the quality, playing with the head up, taking free-kicks and corner-kicks. A very intelligent player.

This was the toughest choice I had to make because I played with Peter Weir and Davie Cooper, but in John Robertson you're talking about a guy who played at the very top level of European football. When he came up against a full-back, he could go past him but he didn't always have to. His use of the ball just to create a little bit of an opening to get crosses into the box was great.

He wasn't the most athletic, he wasn't the quickest. I remember rooming with him and he came in with his little bag, and took out a packet of 20 fags. It didn't hold him back in terms of his quality or his creative genius.

A caveat is that I never played with Denis Law. But King Kenny has got to be there. He was undoubtedly the most talented player I played with. Playing against him you understand how good he really is, but playing with him at the highest level and some of the goals he stuck away, his general all-round play. Definitely world class.

I played with a lot of strikers, but the partnership for me would be Joe Jordan and Dalglish, that would be the dream partnership. Big Joe being there, that presence that he's got, that aerial threat, very good on the ground as well. He played at such a high level and it was an honour to play with him.