Manchester United would have to pay £450m to Real Madrid if they are to sign their 21-year-old Uruguayan midfielder Federico Valverde. (Sunday Mirror)

Liverpool are prepared to sell Swiss winger Xherdan Shaqiri, with Sevilla interested in the 28-year-old. (Talksport)

Liverpool are the favourites to sign striker Timo Werner from RB Leipzig - and the German, 24, would have his preference of shirt number. (Sunday Express)

Chelsea have enquired about Real Madrid's 21-year-old Morocco international Achraf Hakimi, who has impressed on loan at Borussia Dortmund but does not have a clause in the deal about a permanent move to the German club. (Sunday Mirror)

Championship side Leeds United are interested in Metz striker Habib Diallo. The Senegalese forward, 24, has also attracted interest from Crystal Palace and Chelsea. (LeFoot - in French)

Roma are keen on signing Atletico Madrid's former Chelsea striker Diego Costa. The 31-year-old has nearly signed for the club twice before. (Mundo Deportivo - in Spanish) 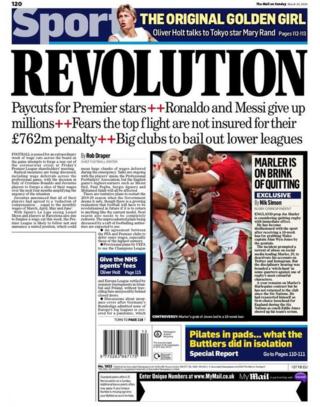