The talk pre-match was of Maradona. Of the world champions. Of glamour. Afterwards, it was about Stewart McKimmie.

Three decades have passed since the 1986 World Cup winners arrived in Glasgow for a friendly with Scotland. It was just four months before they would reach another global final. And yet, Andy Roxburgh's hosts produced a glorious, single-goal Hampden triumph 28 March 1990.

Argentina were without little wizard Diego Maradona, but still fielded five of the XI that took the game's ultimate prize in Mexico. Scotland, though, had McKimmie. And he was the man who made the decisive contribution.

Little over half an hour had been played when Murdo MacLeod, on the left of a midfield five, lofted a ball towards Alan McInally, who prodded into the path of the onrushing McKimmie. The Aberdeen right-back galloped on to it, steadied himself, and laced a thunderous drive into the roof of the Argentina net.

His previous goal? A strike almost five years earlier against Clydebank in a top-flight fixture.

"It was a fantastic finish," MacLeod told BBC Scotland. "Andy Roxburgh said afterwards that it was his two wide players down each side, one crossing it and one putting it in the net."

The contest, billed as a friendly, had been anything but cordial. Roxburgh sent his team out with a refusal to be cowed by their illustrious guests and tackles detonated and tempers frayed.

One memorable moment for McLeod was a challenge of his on Argentine colossus Oscar Ruggeri. The defender had elbowed and shunted and lumped Scotland's forwards up and down the pitch before the then Borussia Dortmund midfielder decided enough was enough.

"Every time the ball went through the middle, he was just having a go at anyone going into the box," MacLeod says. "He was always getting away with heavy challenges. It was a 50-50 between us - he never got the ball, and I got him.

"You get drawn into that situation. If you don't do it, they'll get worse and keep on going into challenges with you, going over the top of the ball. You've got to stand up to them and look after yourself."

Ruggeri, perhaps, had the last laugh. Argentina careered all the way to the final of Italia 90, while Scotland infamously capitulated against Costa Rica and went hurtling out at the group stage.

How, then, could they conquer the game's elite on that cold Glasgow night?

"There were so many photographers at the airport when they arrived, it was all about Argentina. All the Scottish fans were just desperate to get to the game and we were wanting to get stuck into them.

"It turned out to be a physical game, and when we went 1-0 up, they were getting more and more involved, because they were not used to losing matches. It was a big shock for them, but tremendous for us." 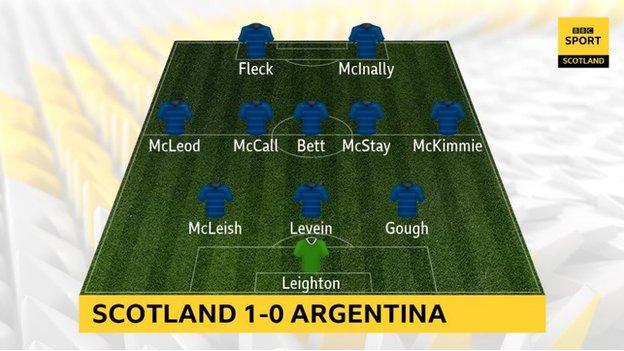