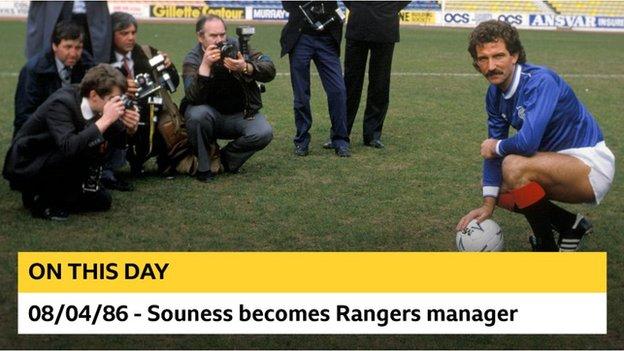 The eighth day of April may not seem like a landmark date for Rangers fans.

It wasn't the day of a title-clinching party, a cup final or a significant European win. But, in 1986, it was the day Graeme Souness was appointed manager and Scottish football experienced a sea change.

That following 14 years were one of the most successful periods in Rangers' history, with 12 league titles, 13 domestic cup wins and two trebles.

And though Souness was only responsible for seven of those trophies, it was his impact that got Rangers supporters used to success again after a largely barren period in the early 1980s.

"I had absolutely no fear and that just shows you how naive I was. I didn't know what I was getting into," Souness told Chick Young as part of BBC Radio Scotland's Managing the Old Firm series in 2010.

Jock Wallace, a treble-winning manager in the late '70s, had been brought back to Ibrox in 1983 to try and restore league success after John Greig's barren five years.

But the title continued to elude Rangers as Aberdeen, Celtic and Dundee United claimed the crown.

"I was nearly two years into a three-year contract for Sampdoria," Souness explained. "I was very happy. I was enjoying living in Italy, I was enjoying the football. Everything in the garden was rosy.

"I got a call out of the blue, would I be interested in managing Rangers? I got very quickly very excited about it."

Rangers added the Scottish Premier Division to the League Cup they won in the early months of the Souness reign and the Ibrox fans' long wait for a championship was over.

The reality - 'I was the target'

The Souness effect was not just felt off the field, but on it as well. The midfielder joined as player-manager and was 33 when he made his debut after captaining Scotland at the 1986 World Cup in Mexico.

For the first two years of his tenure, Souness - a multi-league and European Cup winner with Liverpool - was a regular in midfield, though not always completing matches.

He was sent off on his debut in a 2-1 loss to Hibernian and was shown red cards against Aberdeen and Celtic.

"Do you know how many times I was sent off in England? Once as a 17-year-old and once as a 19-year-old; in a youth game and at Carlisle," Souness recounted. "I come up here and I was getting sent off every season.

"I was the target. What I should've done is when someone got steamed into me, I should've gone down and rolled over but that wasn't what you did in those days. The last thing you did is show that someone had hurt you.

The second season of the Souness era was less successful as Celtic took the title, but the league returned to Ibrox in 1989 before Rangers made one of their most headline-grabbing signings.

Maurice Johnstone became the highest-profile Catholic signing in the club's modern history - just days after he had appeared to be on his way back to Celtic from Nantes.

Other Catholics had played for Rangers but none as controversial as striker Johnston, who previously spent thee years at Celtic Park.

"It was a footballing decision," Souness said. "The other side of it was something that desperately needed to take place. Look how far the club's come.

"Celtic must've been laughing up their sleeve at us. [Late Celtic manager] Jock Stein always said, 'there's two kids, one's a Catholic, one's a Protestant, I only have to work hard to get the Protestant kid'. We were shooting ourselves in the foot."

Johnston - like Butcher, Woods, McCoist and 1988 capture Mark Walters - played a pivotal part as, in 1990, the club won back-to-back titles for the first time in 14 years.

Souness's fourth League Cup win in five years in the autumn of that year would be his last trophy as Rangers boss.

He left for Liverpool the following spring and handed on the reins to assistant Walter Smith, who oversaw title success for the next seven years as the club equalled Celtic's record of nine in a row.

"Managing Rangers - and Celtic must be the same - is the hardest job in British football," Souness said.

"If you're top of the league and not playing very good football, the pressure's off. The pressure all goes on the second team, although they can be playing the better football.

"It was five really, really exciting years. I couldn't pick one specific moment. It was a rollercoaster."