Real Madrid are interested in signing teenage sensation Erling Braut Haaland, 19, from Borussia Dortmund in the summer. The Norwegian striker only joined the Bundesliga side in the summer and has a £50m release clause. (Standard)

EFL clubs have been told football will not return on 30 April with new date to be announced next week amid the ongoing coronavirus crisis. (Mail)

Manchester United are looking to extend the contract of midfielder Paul Pogba, 27, but this would "anger" the France World Cup winner. (AS - in Spanish)

Spanish midfielder Pedro, 32, says he will leave Chelsea at the end of the season when his contract with the Blues expires. (Independent via Cadena Ser)

Everton are one of four clubs to have made an offer for Lille's Brazilian defender Gabriel, 23, who would cost around £30m. (Sky Sports)

Barcelona want to sign Tottenham's most expensive player Tanguy Ndombele, 23, who joined the north London side for £55m from Lyon last summer. (Mundo Deportivo via Star)

West Ham, Sporting Lisbon and Anderlecht are among the clubs monitoring Liverpool's German goalkeeper Loris Karius, 26, who is on loan at Besiktas and available for £4.5m at the end of the season. (Voetbal24 - in Dutch)

Arsenal are keen on signing Valencia's Spanish midfielder Carlos Soler, 23, with the La Liga side needing to sell players to balance their books. (Sky Sports) 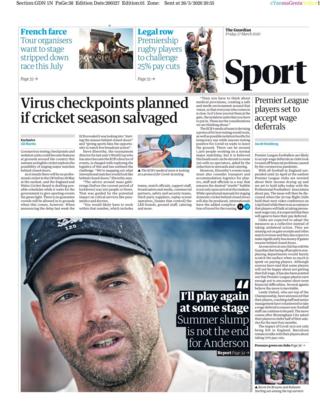 Guardian back page on Friday, 27 March