Manchester City and England forward Raheem Sterling, 25, still has affection for Liverpool despite the acrimonious nature of his move to City. (Sky Sports)

Liverpool, Manchester City and Arsenal are interested in Schalke's 6ft 3in 18-year-old German-born defender Malick Thiaw who has a £6.9m release clause in his contract. (Mail)

Manchester United are growing confident France World Cup winning midfielder Paul Pogba, 27, will stay at Old Trafford and doubt whether any of Europe's elite clubs can afford him. (ESPN)

The Blues are also interested in Ajax's Argentine defender Nicolas Tagliafico, 27, after abandoning their pursuit of Leicester full-back Ben Chilwell. (Calciomercato, via Express)

The self-isolation of Juventus players and staff will end on Wednesday, and they will be allowed to leave their respective homes. However, players Daniele Rugani, Blaise Matuidi and Paolo Dybala will remain in quarantine, as they recover from coronavirus. (Gazzetta dello Sport)

Crystal Palace winger Wilfried Zaha has called on more landlords to open the doors of their empty properties to NHS staff working in London during the coronavirus pandemic. (Evening Standard) 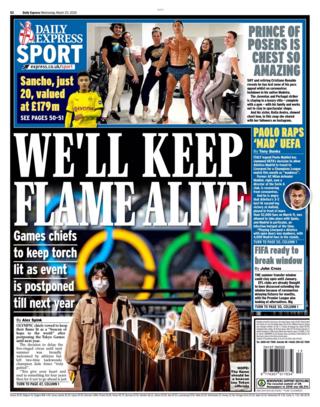