English goalkeeper Dean Henderson, 22, has told his Sheffield United team-mates he will be back on loan at the club next season if he is not guaranteed a starting role at parent club Manchester United. (Mail)

German midfielder Emre Can, 26, says he had an offer to join Manchester United - but, as a former Liverpool player, "didn't think about it for a second". Can is currently on loan at Borussia Dortmund from Juventus. (Kicker - in German)

Arsenal could move for their former youth team player Donyell Malen, the 21-year-old Netherlands forward who left the Gunners to join PSV in 2017. (Le10Sport)

Chelsea's English midfielder Conor Gallagher, 20, on loan at Swansea, is wanted by Dutch side Vitesse Arnhem on loan. (Sun)

Manchester United are confident they can convince Dutch winger Tahith Chong, 20, to stay at the club, despite interest from Barcelona, Inter and Juventus. (Sun)

Tottenham are keen to recruit a left-back this summer and have targeted £22m-rated Borna Barisic, the 27-year-old Croatian currently with Rangers. (90 Min)

Who gets the vote this week?

It's time for Garth Crooks' Team of the Week

Chelsea's France international striker Olivier Giroud, 33, has revealed that he was "blocked" from joining rivals Tottenham in the January transfer window. (90 Min)

Giroud admits he was interested in a move to Inter during the January transfer window. (Calciomercato)

Arsenal's Gabon striker Pierre-Emerick Aubameyang, 30, continually linked with a move, has stressed he is "happy" at the Emirates. (Mirror)

Juventus and Argentina forward Paulo Dybala, 26, told his agent to cancel his move to Manchester United - when the player's representative was sat in Ed Woodward's office. (Calciomercato, via Mirror)

Bournemouth's Wales winger Harry Wilson, 22, on loan from Liverpool, was pictured wearing a Reds overcoat at the meeting of the two clubs on Saturday but insisted he was given it by an Anfield member staff because he was cold. (Liverpool Echo)

Liverpool could be set for a cash injection this summer thanks a 30% sell-on clause included in the deal to sell Spain midfielder Luis Alberto, 27, to Lazio by sporting director Michael Edwards. (Star)

Real Madrid coach Zinedine Zidane says his side's 2-1 defeat by Real Betis was their worst result of the season. (Marca)

Discussions are set to take place over whether Paris St-Germain's Champions League match against Borussia Dortmund on Wednesday should be played behind closed doors because of the outbreak of the coronavirus. (RMC Sport - in French)

Meanwhile, some Bundesliga games are set to be played behind closed doors because of the virus. (Sport Bild - in German) 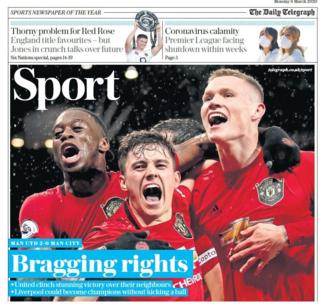 In the Daily Telegraph, "Bragging rights"