Fowler, Owen, Torres, Suarez - Liverpool have had more than their fair share of goalscoring heroes in the Premier League, but Mohamed Salah is proving the most prolific yet.

The Reds' 'Egyptian King' marked his 100th top-flight appearance with his 70th league goal for the club in Saturday's 2-1 win over Bournemouth. In their first century of Premier League appearances, only Alan Shearer scored more.

The 27-year-old's first-half strike lifts him above former Reds forward Luis Suarez as the club's greatest overseas goalscorer of all time, while also making him the first Liverpool player since Michael Owen in 2002-03 to reach 20 goals in all competitions in three successive campaigns.

"I always love to score and help the team get points," Salah told BT Sport following Saturday's win, which moved Jurgen Klopp's team to within three victories of a first top-flight title in 30 years. "We need to keep going for the next three games and the rest of the season."

BBC Sport looks back at some of the Egyptian's best Premier League moments in a Liverpool shirt. 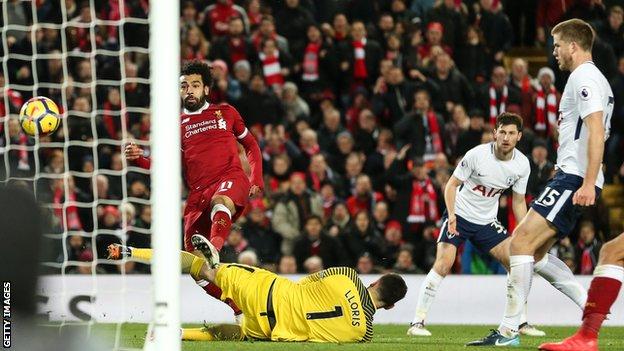 After his third-minute goal was cancelled out by Victor Wanyama, Salah's remarkable weaving run and finish looked to have given Liverpool victory in second-half stoppage time, only for Harry Kane to rescue a point for Tottenham from the penalty spot. 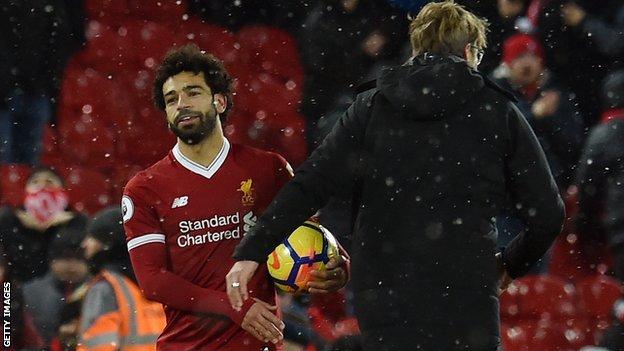 The Egypt international produced an attacking masterclass against Watford in his first season in England, scoring four goals and assisting another in a comprehensive victory at Anfield. 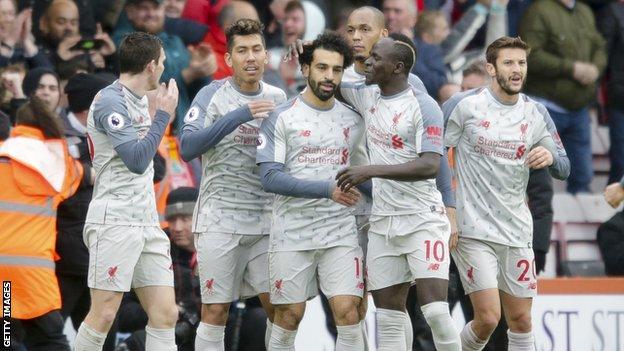 Against the Cherries in 2018-19, Salah scored his second hat-trick for the club since arriving from Roma to send Liverpool top of the table - before handing his man-of-the-match award to James Milner. 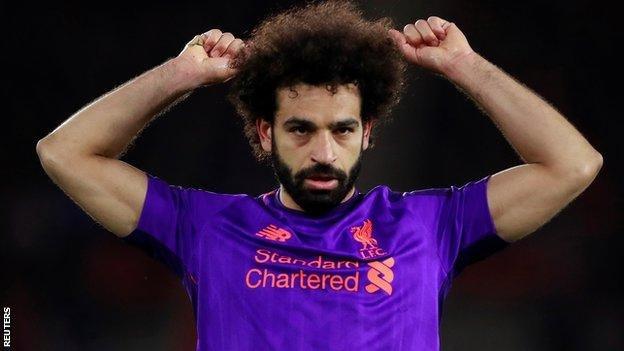 Salah became the quickest Liverpool player to score 50 Premier League goals for the club - a record previously held by Torres - in a routine win at St Mary's. 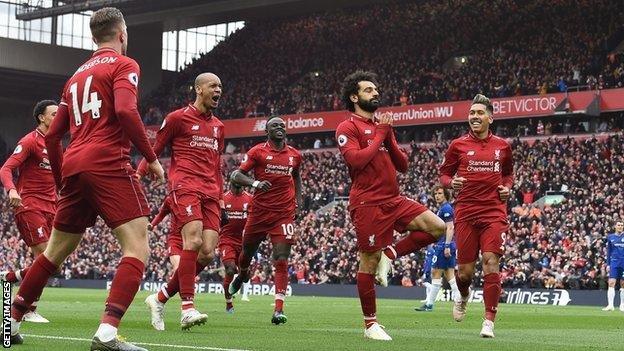 The Egyptian's wonder-strike - an angled drive into the top right corner from 25 yards - helped Liverpool overcome Chelsea in 2019 and keep the pressure on Manchester City at the top of the Premier League. Klopp's side finished as runners-up despite a tally of 97 points.

'They said he'll be a one-season wonder!' - Twitter reacts to Salah's landmark goal

Stanley House: "It wasn't that long ago our forwards were Balotelli, Borini and Lambert. Now we are watching Mo Salah get 20 goals in all comps for the third consecutive season. Unreal player."

MagicMo: "Mo Salah has come from seven goals down in the golden boot race to close it to one goal. Remarkable."

Zak Ahmed: "Mo Salah's goals to games ratio for #LFC is insane! 70 goals in 100 games. They said he was going to be one season wonder!"

Matt: "Mohamed Salah has more goal/assist involvements this season than any other striker or winger in the Premier League and is second only to Kevin de Bruyne. He's also scored 20+ goals across all competitions for the third season in a row. Don't ever tell me this man is overrated again!"

No Look Bob: "I appreciate greatness. @MoSalah is already a Liverpool great and I for one hope he stays and gets himself up our all-time scorers list and gets all the plaudits he deserves!!"

Tima LFC: "Imagine being a winger and doing this sort of madness. Could never be your winger!!!"