Rangers returned from the winter break with their Scottish Premiership title hopes in their own hands. But just 49 days and 12 domestic duels later, they are 13 points behind city rivals Celtic and staring at another trophyless season.

Steven Gerrard's side were turned over at home by erstwhile bottom side Hamilton Academical on Wednesday, while Celtic dropped their first points of the year in a 2-2 draw at Livingston. It was the fifth time in eight matches that Rangers had spilled points.

Progress to the last 16 of the Europa League has been some sort of balm, but a Scottish Cup exit against Hearts means their struggles have also extended to the cup competitions.

So what exactly has gone wrong at Rangers in 2020? BBC Scotland takes a look at the issues.

They have become defensively suspect

One of the major issues has been that Rangers have consistently struggled at the back in recent domestic matches, with the centre-backs in particular repeatedly making basic errors.

In the defeat at Kilmarnock, Connor Goldson and Nikola Katic failed to deal with a simple long ball, which led to Eamonn Brophy scampering through for the winner. Katic was then directly at fault for both St Johnstone's goals in the 2-2 draw at McDiarmid Park.

Gerrard responded by dropping the Croat for the Europa League second leg against Braga and George Edmundson put in an outstanding display alongside Goldson as Rangers kept a clean sheet to progress.

But the same pairing played in the 1-0 Scottish Cup defeat by Hearts, when James Tavernier's sloppy header led to the winning goal. And once again, Goldson's error gifted David Moyo a tap-in for Hamilton's winner at Ibrox.

Filip Helander, who has been missing since before the winter break with a foot injury, is due to return to full training on Friday - something Gerrard described as "a big boost". Given the recent woes, he will be under pressure to have an instant impact.

They are toiling to create chances

For all those calamities in defence, Rangers have still only conceded 19 times in 28 games this season - the same as Celtic. But having been matching their city rivals for goals scored up until January, they have now netted 21 fewer in total.

Striker Alfredo Morelos, who recently apologised after a disciplinary breach, had scored 28 times in all competitions by Boxing Day, and has added just one since.

In addition, expected goals statistics (xG) suggest an overall drop in the quality of the chances Rangers are creating. In 13 of their 22 domestic matches before the break, Rangers' expected goals per game was more than two. Since the winter break, that has only crept above two twice.

Starting with the distribution at the back, and flowing forwards, Rangers seem to have lost the ability to cut through teams. 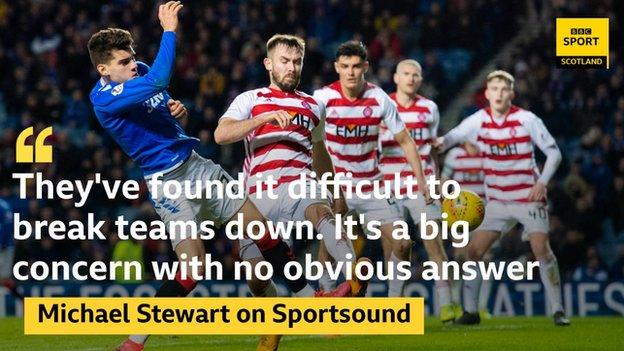 But why the collapse?

It is easy to point to Rangers' recent flaws but everyone - including Gerrard himself - seems at a loss to explain why exactly their form has fallen off a cliff.

"Myself and my staff are flat because we are doing everything we can," he said after the Hamilton defeat. "We are trying to change formations and personnel, doing different things in training to try and lift and put confidence into them."

Obviously the form of key players has collapsed, and some have pointed to Gerrard's tactical inflexibility, but the most common factor discussed seems to be mentality. Indeed, the manager himself has questioned it on more than one occasion.

It is an intangible quality, but one oft cited in football - do Rangers have enough winners? 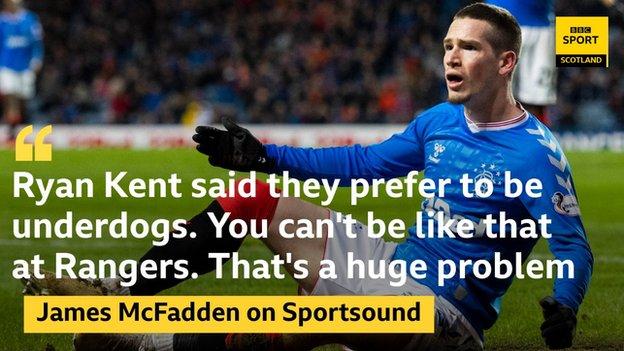