Spain goalkeeper Kepa Arrizabalaga, 25, is prepared to quit Chelsea this summer after losing his place in the team. (Sun)

Arrizabalaga is ready to leave Stamford Bridge because manager Frank Lampard failed to honour a verbal agreement to keep him as Chelsea's number one. (Mail)

However, Lampard says Arrizabalaga is in control of his own future at the club. (Sky Sports)

The agent of Germany international Mesut Ozil, 31, has confirmed the midfielder will not leave Arsenal before his contract expires in June 2021. (inews)

Aston Villa's English midfielder Jack Grealish, 24, has indicated he plans to remain at the club this summer amid interest from Manchester United. (Express)

But Villa manager Dean Smith is unsure if Grealish will stay, regardless of whether the club wins the league cup against Manchester City on Sunday. (Mirror)

The agent of RB Leipzig's 28-year-old Sweden midfielder Emil Forsberg says it is no surprise Tottenham manager Jose Mourinho would like him on his team. (Expressen - in Swedish)

Leicester City are close to signing France youth international midfielder Arnaud Lusamba, 23, on a free transfer once his Nice contract expires at the end of the season. (Mail)

Arsenal's summer transfer plans have been dealt a £60m blow following the club's last-32 exit from the Europa League. (Sun)

Liverpool manager Jurgen Klopp said it was "obviously nice, but that's all" in response to 23-year-old RB Leipzig and Germany striker Tim Werner's comment that he was "very proud" to be linked with a move to Liverpool. (Sky Sports)

There is no guarantee that Premier League leaders Liverpool would be crowned English champions if the season is cut short by the coronavirus. (Telegraph)

The Premier League could soon hold emergency crisis talks to decide whether Liverpool can be crowned champions if the season has to be stopped early. (Sun) 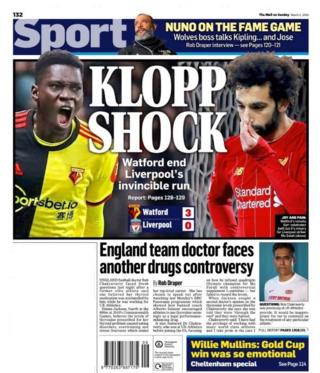 The Mail on Sunday back page