Wednesday's win over Real Madrid was a landmark night in the Champions League for Manchester City and the way they won at the Bernabeu was memorable too.

City were under added pressure going into the tie because of their European ban, then all the talk before kick-off was about Pep Guardiola's team selection when he left Sergio Aguero out.

Pep's plan worked to perfection, though, and it was brilliant to watch.

There were some fantastic individual contributions from the likes of Kevin de Bruyne, Gabriel Jesus and, off the bench, Raheem Sterling as City fought back to beat Real for the first time in their history.

De Bruyne was magnificent, despite being in a more advanced role where he saw less of the ball. He had to wait for an opportunity on the half-turn but, when he got it, he delivered and showed again you can always rely on his drive and determination.

But, overall, it was a fantastic team performance that was behind this result.

Guardiola got his tactics absolutely spot on, and his players understood his instructions and put in one heck of a shift to carry them out.

There is still work to do in the second leg, and losing Aymeric Laporte to another injury was a big blow - but City have put themselves in a wonderful position to make it through to the quarter-finals.

False nines leave Real without a striker to mark

When I saw City's line-up, I thought straight away that Guardiola had gone with legs and energy in his team rather than risking too many players who might not last the 90 minutes, but I still did not know what shape he would use.

It was fascinating to watch his plan play out. 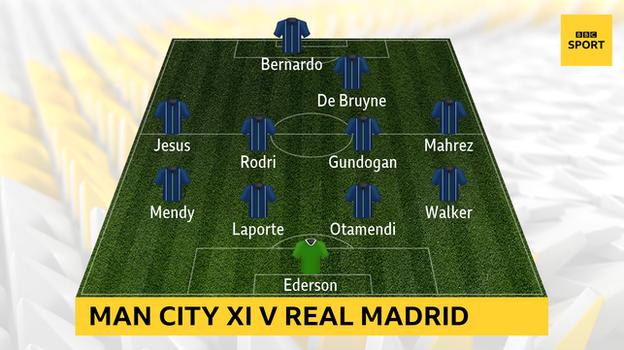 In the first few minutes it was Bernardo Silva who was on the left and Jesus in the middle, but then suddenly Jesus pulled over to that side.

Riyad Mahrez went very high on the right and Bernardo occupied a more central role with De Bruyne, leaving Rodri and Ilkay Gundogan deeper behind them.

It was the same strikerless formation that City had used when they went to Old Trafford and won in the first leg of the Carabao Cup semi-final in January.

Only this time, Jesus was on the left instead of Sterling, who was on the bench after his hamstring injury - Guardiola was waiting to use him, and what an impact he would have.

City playing without a centre-forward gave Real something different to think about, as their two experienced centre-halves did not have a number nine to mark. 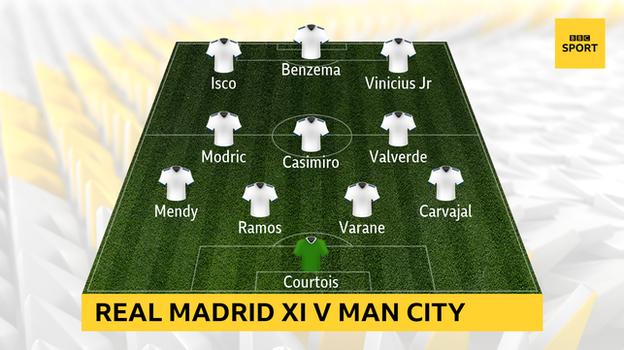 I can see why Guardiola did it, because Sergio Ramos and Raphael Varane would not have given Aguero or Jesus much space if they had led the City attack and I am not sure that role would have suited Jesus, in particular.

Rather than have his back to goal with a defender close up behind him and marking him tightly, he likes to get on the ball and go at people - which he was able to do at the Bernabeu with his runs down the left.

Sterling shines as a substitute

Real started off by seeing a lot of the ball - as much as 70% in the first few minutes - but City looked like they were in a good shape and limited their opportunities pretty well.

A couple of loose passes got City in a little bit of trouble early on but when Real were bringing the ball forward and building attacks, Guardiola's side looked extremely comfortable.

City were actually beginning to take control of the game when they fell behind on the hour mark, and again they brought on their own downfall because it was Rodri who let Real in when he gave the ball away in a key area.

After taking the lead, Real were initially very good at stopping City building momentum - but that all changed when Sterling replaced Bernardo after 73 minutes.

Sterling scares defenders because they don't like someone with his pace running at them on and off the ball, and he did both against Real to devastating effect.

City's first goal came in the 78th minute, after he made a run off the ball down the left, and left space for De Bruyne to clip in a wonderful ball for Jesus, who had moved inside to play as a centre-forward, to head home.

By now the game had opened up and I said on BBC Radio 5 live that it was perfect for Sterling to get in a one-on-one with someone in a wide area and push him back into the box.

That is exactly what happened. Dani Carvajal is experienced enough to know better than to go to ground, but he went for the tackle when he should have just carried on running with him.

Sterling is so quick that Carvajal made the mistake and left a leg in, and down he went.

Recently, being awarded a penalty has meant problems for City. They have missed their last four from the spot - including against Leicester on Saturday - and five out of eight this season.

Along with 5 live commentator John Murray, I had analysed all of them before the game, and looked at who might take their next one too.

It turned out De Bruyne had not taken one for City since October 2016 but he had obviously agreed in advance that it was his turn to have a go.

I think he was the right choice and if he does miss one in the future, I don't think he should stop taking them.

He has just kept on getting better and better in the past couple of years and, at the level he is at now, I think he could just take it on the chin and think 'I am one of the best players in the world, look what else I deliver'.

It was good timing for him too, because he had created the equaliser only a few moments earlier so when City got their penalty, he was probably thinking 'this is perfect, let me take it'.

The way City saw out their win was impressive too - what happened on the night was all about their effort and their concentration, and their players put everything they had into it.

At the final whistle I was watching the whole City bench celebrating with Guardiola, because they knew what a big game this was for them.

They fully deserved their result, although it would be a mistake to think this tie is won.

City have the advantage but Real will come to the Etihad Stadium for the second leg on 17 March with their history, their players and the way they thrive in this competition when it matters. You cannot afford to under-estimate them.

It will, though, definitely help City that Real defender Sergio Ramos is suspended after his red card on Wednesday. He is one of the big characters they have relied on recently when they have been under pressure in times of need.

Real will still see plenty of the ball, which is something City are not used to, so how will Guardiola play it now he has a lead to protect?

Does he set the tone of the game and come forward, or does he again set up to play out of possession and wait to hit Real on the counter? It is going to be very interesting to find out.

Guardiola changed his formation in the second leg against United, but this time I would not be surprised if he stuck with this shape, and the side that won in Spain, as much as possible. It was exactly the kind of performance City will need to see this tie out.

The only downside is that he might have to do it without Laporte, who limped off in the first half.

Laporte has only just returned after five months out with a knee injury, so any long absence would be a huge blow.

With the games that City have coming up, including Sunday's Carabao Cup final against Aston Villa, I would hope that they have enough to cope without him but I would feel more confident about the return against Real if he was back in the team.