United are likely to sell England forward Jesse Lingard, 27, and Brazil midfielder Andreas Pereira, 24, at the end of the season. (Express)

Arsenal could listen to offers for Pierre-Emerick Aubameyang this summer to avoid losing the 30-year-old on a free next year. (Mail)

Inter Milan have made Aubameyang their number one transfer target should Argentina striker Lautaro Martinez, 22, leave this summer. (Calciomercato)

Alternatively, Gabon forward Aubameyang is yet to rule out signing a new contract at Arsenal but talks have not progressed. (Metro)

Manchester City could lose many of their key players, including 25-year-old England forward Raheem Sterling, if they win this season's Champions League. (ESPN)

Arsenal are interested in Spain U21 left-back Marc Cucurella and are willing to pay a £20m release clause to sign the 21-year-old, who is on loan at Getafe from Barcelona. (Cadena Cope via Sport Witness)

Real Madrid's Spain defender Sergio Ramos, 33, is in no rush to discuss a new deal at the Bernabeu but says his relationship with the club is "magnificent". (Goal)

Spain manager Luis Enrique is concerned about 25-year-old Chelsea goalkeeper Kepa Arrizabalaga's lack of recent minutes as he plans for the summer's European Championship. (AS - in Spanish)

The rise of ex-Arsenal forward Gnabry who ran Chelsea ragged

But David's agent believes such a move may be "a step too big at the moment". (FourFourTwo)

Arsenal are ready to pay the £21m release clause of Barcelona's 21-year-old Spain full-back Marc Cucurella, who is on loan at Getafe. (COPE, via Express)

Real Madrid are monitoring Crystal Palace's Norway striker Alexander Sorloth, 24, who has scored 21 goals in 30 appearances while on loan at Turkish side Trabzonspor this season. (Evening Standard)

Inter Milan are unhappy with the performances of Chile forward Alexis Sanchez, 31, who is likely to return to Manchester United in the summer. (Star)

Arsenal hope to arrange a pre-season friendly against Villarreal at Emirates Stadium this summer, which will act as a farewell match for former manager Arsene Wenger and midfielder Santi Cazorla. (Mail) 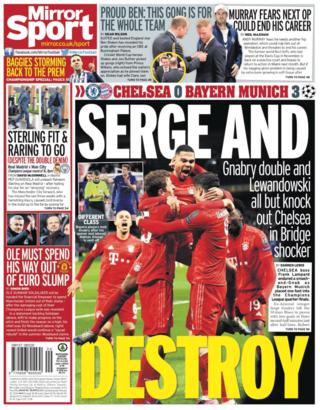 Mirror back page on Wednesday