Arrogant, cheeky and an unmistakable touch of class - Manchester United fans have a new hero in Bruno Fernandes, and Peter Crouch thinks there is a lot more to come from the Portuguese midfielder.

Crouch joined Micah Richards on Match of the Day 2 on Sunday to analyse Fernandes' sparkling solo display against Watford.

The 25-year-old, a £47m January signing from Sporting Lisbon, scored one goal and helped make two more as United saw off the Hornets to move up to fifth place in the Premier League.

Here Crouch explains what impressed him most about Fernandes, and why he has already made such an impact at Old Trafford.

He also explores the part forwards Anthony Martial and Mason Greenwood have played in United's upturn in form, but warns there is still improvement needed in other areas if Ole Gunnar Solskjaer's side are going to finish in the Champions League places.

How Fernandes has lifted Old Trafford

Crouch: "Watching Fernandes run the show against Watford showed exactly what United have been missing while Paul Pogba has been injured. He has got a bit of arrogance about him that I quite liked to be honest.

"They have not had anyone playing with that kind of confidence or flair, because it has not been that kind of season for them.

"So, to now have someone who gets the fans off their seats is massive for them - and you can understand why the supporters have taken to him so quickly because he is exactly what they and the team needed.

"Fernandes lifted the whole stadium on Sunday and, as well as the part he played in all three goals, what was impressive about him was his range of passing and the way he carried the ball.

"On top of that, he was full of tricks and he showed great awareness.

"He is clearly someone who can unlock a defence, which is something else United have been lacking while Pogba is out and since Juan Mata has gone off the boil."

A big character to go with a big talent

Crouch: "It takes a big character for someone to arrive at a club like United and instantly take on the responsibility of being their most creative player. But everything was going through Fernandes on Sunday and he was very comfortable with that.

"He was telling his team-mates what he wanted and he looks like a leader as well, so that is another thing he brings to the table that United needed.

"For his goal, I liked the fact that straight after he was fouled he was saying, 'Give me the ball, I want the penalty'. And the way he took a little skip before casually stroking home the penalty was more proof that he has got a bit of arrogance about him. He was like a breath of fresh air.

"He has done all of this after joining in January too, and at a team who were not playing well and needed to sign someone to make an instant impact. He has definitely done that.

"Yes, it will have helped that he was playing well for Sporting before he made the move to England but he has still come to a different country and had to adjust to the Premier League. Despite all that, he has hit the ground running.

"It is true that it is not always the case that you have a harder time when you join a club in the middle of a campaign - I have experienced that for myself.

"You can have a honeymoon period at first and then the real work begins the next season when it can be a struggle because people expect more of you.

"I don't think that will happen to Fernandes, though. We have seen glimpses of his quality but there is a lot more to come from him, and I think he will get better and better."

Greenwood wants to get into the opposition area

Crouch: "Fernandes was not the only player to shine against Watford - he is breeding confidence in the likes of Martial and Greenwood too.

"Greenwood is one of the United players I have felt for this season. He only turned 18 in October and has probably played more than he expected this season.

"Young players like him are always going to suffer the odd dip in form, but along with Daniel James and Marcus Rashford he has frequently been asked to carry the can and help lead United's attack because Solskjaer has not had any other options.

"Greenwood has never let United down, though, whatever role he has been given. He was on the right against Watford and he was absolutely magnificent. He fully deserved his goal.

"I love the way he carries the ball and he works so hard for the team as well, but he also has a real desire to get into the opposition area and affect things in there, which is something that you don't see so much from Martial.

"Martial kept up his run of goals on Sunday and his improved form is another boost for United, but I still think he could get in the box more and get more goals, and maybe he can look at Greenwood and learn something from him."

The verdict - still room for improvement

Crouch: "A month ago, when they lost at home to Burnley, I don't think things could have got much worse for United.

"There was quite a negative feeling around Old Trafford and the team was miles away from where they needed to be.

"The atmosphere is very different now - they are in a good place to push on for a top four finish too. 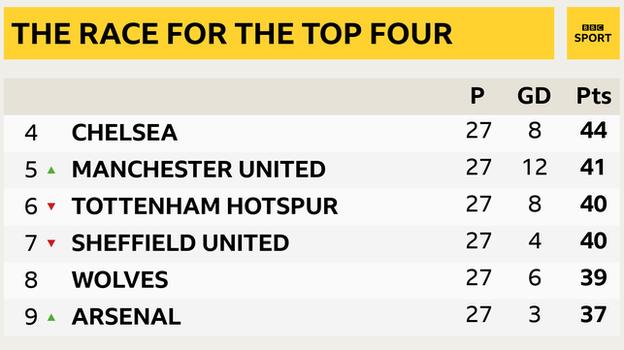 "Beating Watford might not feel like a big deal to some people but, after United got such a big win at Chelsea on Monday, I always saw this as a game where they might slip up - especially with an early kick-off on a Sunday when the stadium might be a bit flat.

"They ended up winning comfortably, but they did not have it all their own way. Watford started really well and put them under pressure, and United were a bit sloppy sometimes with their passing out of defence. They still made a lot of errors.

"While the statistics might suggest United are much better at the back, because they have kept clean sheets in five of their past six games in all competitions, I would say watching them tells a slightly different story.

"They still look vulnerable from set-pieces, for example, and although Watford's equaliser from a corner was correctly ruled out for a handball, the game was still in the balance at that point.

"So, there is still lots of room for improvement and they are not yet at the same level as the United teams I played against, but what I would say is that they are taking steps in the right direction now."