Manchester United are interested in a summer move for Wolves and Portugal forward Diogo Jota, 23. (Calciomercato)

Real Madrid are ready to drop their interest in Manchester United's French midfielder Paul Pogba, 26, as they switch their attention to Rennes' 17-year-old France Under-21 international Eduardo Camavinga. (Marca)

Liverpool keeper Loris Karius is set to return to Anfield this summer because Besiktas do not intend to take up the option to turn the 26-year-old German's two-year loan into a permanent deal. (The Athletic - subscription required)

Arsenal have made Bayer Leverkusen and Germany defender Jonathan Tah a top target and are ready to activate the £34m release clause in the 24-year-old's contract. (Bild, via Mirror)

Lawro faces the stars of This Country

It's the Premier League predictions

Former Juventus and AC Milan manager Massimiliano Allegri has suggested he wants to be back in a job by September- with Manchester United said to be among the clubs monitoring the Italian's situation. (Mirror)

Real Madrid boss Zinedine Zidane says Raheem Sterling is a "very good" player but is not prepared to talk about a possible bid for the 25-year-old Manchester City and England forward. (Goal.com)

Crystal Palace manager Roy Hodgson says he is ready to sign a new contract as he believes in the club's "good intentions" in the transfer market. (Sky Sports)

Eagles chairman Steve Parish says they have an option to buy Turkey striker Cenk Tosun at the end of the 28-year-old's loan spell from Everton. (Liverpool Echo)

Arsenal's Germany centre-back Shkodran Mustafi, 27, thinks he could still play an important part in the club's future, despite being regularly linked with a move. (Mirror)

Manchester City have hired the lawyer who twice blocked Brexit in an attempt to overturn their two-year ban and keep them in Europe. (Mirror)

Spurs manager Mourinho has revealed he knows how the Blues will line up against his team at Stamford Bridge. (Express)

Lampard insists the Chelsea board backs his decision to drop 25-year-old Spaniard Kepa Arrizabalaga - the world's most expensive goalkeeper - to the bench. (ESPN)

Newcastle's English striker Andy Carroll, 31, is optimistic he will be fit for the season run-in and make enough appearances to trigger a one-year contract extension. (Chronicle)

Sheffield United's on loan Manchester United goalkeeper Dean Henderson, 22, has been challenged by Blades boss Chris Wilder to win a place in England's Euro 2020 squad by performing well in the final 12 games of the season. (Manchester Evening News)

QPR director of football Les Ferdinand believes 22-year-old English midfielder Luke Amos, who is on loan from Tottenham, can offer the Premier League side something different when he returns. (Football.London) 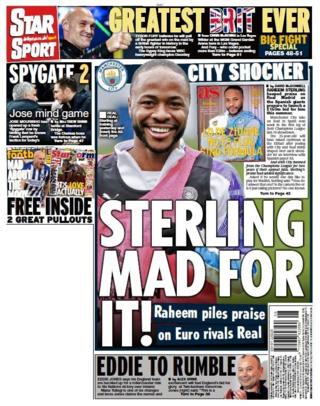 In the Daily Star, "Sterling mad for it"

Read more on 'I've signed up to be an NHS volunteer'