The only one of the Seven New Wonders of the World that Kenny Brannigan hasn't seen in person, he says, is the Taj Mahal.

He's gone from breaking jaws and fighting with fans, to the grandeur of Rome's Colosseum. From a brawl in a Saltcoats nightclub, to the mystique of Machu Picchu, Peru's lost city. From a suicide attempt and losing his business, to coaching kids in Beijing and visiting the Great Wall of China.

It has been quite the adventure for a Scottish football journeyman, who spent time with 14 clubs after signing for Queen's Park in 1982.

Brannigan was, by his own admission, no-nonsense, win-at-all-costs. He was a man of the times, a product from the streets of Glasgow's Bridgeton where no quarter was given.

"A square go? If you come and fight on my turf, you're going to get battered," he says of his mentality as a player. "At three o'clock on a Saturday, I was wound up to batter everybody.

"You go out and do the things you're good at. I never got beat in the air. The boy that comes to mind is [Steven] Thompson from Rangers - I won every single header for Airdrie at 38 years of age against him playing for Dundee United. I retired two games later and he signed for Rangers a few weeks after that."

'I stuck the nut on him and got the sack'

Brannigan's candour is also a mark of the time he played in. Although unapologetic about his attitude, there is regret about overstepping the line at times.

He admits there was a simmering temper, which sometimes burst through. While playing for Kilmarnock in 1989, he got up one morning to read in a newspaper he had been sacked for an incident at the game the day before.

He was up against a player who had left the club a few weeks previously, Derek Cook, and says he was kicked in the back of the head during a challenge. Big mistake.

"I knew I was going to be in for a time of it - I stuck the nut on him anyway. I got the sack. I damaged the boy."

He recalls a scuffle in a Saltcoats bar in 1989 as some locals started a fight with team-mate Colin McNair on a squad night out. "Wonderful footballer [McNair], but he was a troublesome guy and he got dug up. It could have been all-out war but we broke it up. But the boy went and got all his pals and they were after McNair again.

"It was a stitch up. They called us the 'Saltcoats Seven' and we went into the club the next day, and I was the one who had to go and tell Duff: 'Look, we got the jail on Saturday night, seven of us got stitched up.' Every one of us left the club that year..."

'I lost everything and tried to kill myself'

Two douses of controversy did not put Stranraer and Stenhousemuir off signing Brannigan and he helped both to Challenge Cup success and the former to promotion from the second division.

But football proved a fickle friend. His coaching career at Queen's Park was cut short after an altercation with a fan, when Brannigan insists he was the one punched -"If I'd a banged him I'd have put him in the hospital, trust me".

And though he was assistant manager at Queen of the South as they reached the Scottish Cup final in 2008 and got into Europe, his sacking as manager of the club in 2011 - having replaced Gordon Chisholm - marked the start of a dark period in Brannigan's life.

The phone stopped ringing. His property and pub businesses collapsed around him, and personal tragedy also struck. The game was no longer his saviour.

"Going away to Canada to sort my head out was the best thing ever. I was in a bad way, a real bad way."

'Scottish football is an illusion'

His savour was Andy Kean, founder and chief executive of FirstPoint USA, a company which aims to set-up teenagers with sporting scholarships in the US and elsewhere around the world, and for whom Brannigan now travels the world as a coach and talent-spotter.

He and his life have changed for the better, and his passion for football is undimmed. What drives him now is not leaving stud marks on centre-forwards, but giving kids an opportunity. 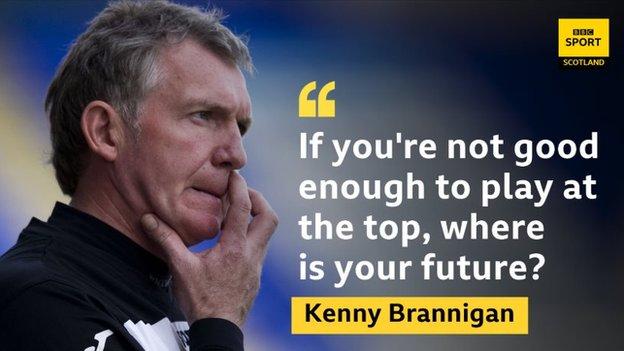 "We're living in an illusion - 54% of clubs in Scotland are full-time," he says. "If you're lucky, you'll get eight to 10 years out of the process, and more than one or two managerial jobs.

"You put a kid out to the States who's going to play for the love of the game. He's still studying for a degree, for a long-term future. To change a kid's life long-term is a fantastic thing.

"If you're not good enough to play at the top, where's your future? It's part-time and you need a job. There's got to be a process when kids sign with a club that there's some sort of educational thing put in place so they don't hit mental health [problems]."

'I've seen the wonders of the world'

The elimination of insecurity in football is the 54-year-old's mission, and Brannigan has mellowed from the days of bawling at team-mates, too. He's had to.

His new life, which also involves working as a scout for Hamilton Academical, has provided unique challenges for the tough, but softly-spoken, Glaswegian.

"If you go to Canada, to America, you have to change. You can't even swear," Brannigan says. "For a guy like me, not to swear when you're teaching is so difficult after going through your whole life swearing at players.

"I'm from Bridgeton, but I've not lived there in 20 years. I've seen all the wonders of the world doing what I do for a living. So for a young boy who couldn't afford a pair of football boots to doing what I do, the difference..."