Liverpool's first-choice starting XI are already on their way to iconic status courtesy of performances over the past two seasons, including a stunning run of form to go more than a year unbeaten and lead the Premier League by a massive 25 points in 2019-20.

Would it surprise you, then, to learn that the 1-0 defeat at Atletico Madrid in the first leg of their Champions League last-16 tie in February was the first time this side had started a game together?

It is not such a unique phenomenon, though. Some of the most iconic starting XIs in football history barely ever began a game together.

Injuries, suspensions and, more recently, squad rotation, along with perhaps a bit of misremembering on our part, all contribute to make some of football's most revered sides no more than a myth.

The Premier League era is awash with them. There are, of course, also notable examples from pre-1992 in England.

One such case is the one which inspired this piece - that the iconic Don Revie Leeds side of the late 1960s and early 70s started just one game together.

But before we have a look at the more recent examples - and seeing as we are in what was supposed to be an international break - let's have a look at arguably England's most iconic XI.

Some people are on the pitch... 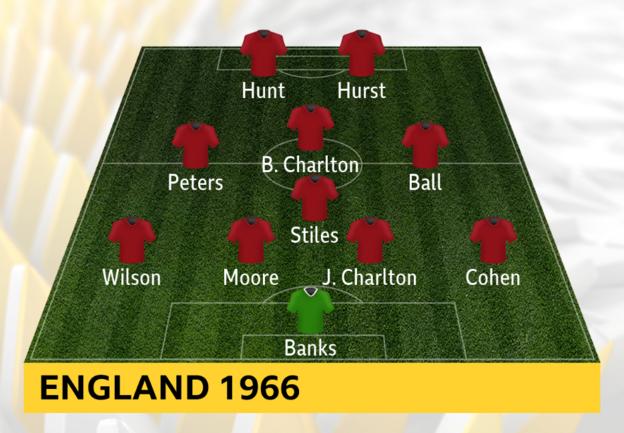 Beating West Germany 4-2 to win the 1966 World Cup earned this line-up legendary status but they actually only played together six times.

One of the chief reasons they started so few games together is Jimmy Greaves - the forgotten man of that World Cup triumph.

Geoff Hurst scored a hat-trick in the final but he probably would not have featured in the game at all had Greaves - the country's all-time leading scorer at the time - not been injured in the last of the group games, against France.

This opened the door to Hurst, who scored the only goal in the quarter-final win over Argentina, kept his place for the semi-final with Portugal and got the nod from boss Alf Ramsey for the final, despite Greaves being fit.

That final XI would play three more games after the World Cup before Greaves was restored and players like Alan Mullery and Brian Labone came to greater prominence.

They were undefeated as a side and went out in style with a 5-1 win over Wales in a qualifier for the 1968 European Championship.

How about a more recent, famous incarnation of the England side - the country's supposed "Golden Generation"? 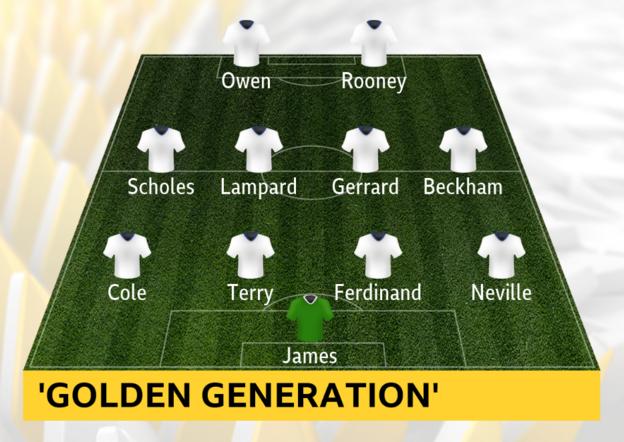 They never once started an international together.

This is mainly due to Rio Ferdinand's suspension in 2004 for missing a drugs test, which kept him out of that year's European Championship finals in Portugal, followed by Paul Scholes' retirement from international football immediately after that tournament.

But even if you replace Ferdinand with Sol Campbell, this XI only started four games.

Moving on to the Premier League and we'll start with the side that dominated the newly-branded division's initial seasons - Sir Alex Ferguson's early-1990s Manchester United. 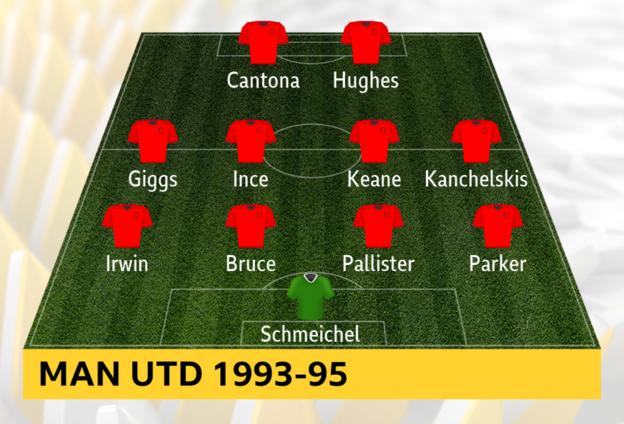 Solid at the back, with grit in the middle, pace and trickery out wide and a mixture of flair and finishing up top, this iteration of United won two Premier League titles in three years, one forming part of a Double in 1993-94. But the above XI would start just six league games - winning them all.

Extended to cup games, this becomes 12 matches. Unsurprisingly and no doubt part of the reason behind their status, they did not lose a single game, only drawing one - the 1993 Community Shield with Arsenal, which they won on penalties.

The likes of Bryan Robson, Brian McClair and Lee Sharpe played a significant role during that time, with Eric Cantona's suspension for attacking a fan at Crystal Palace disrupting the side before Andrew Cole's arrival and Mark Hughes' departure signalled the end of it.

Interestingly, the side that preceded this, which has McClair in place of Roy Keane and Sharpe on the right instead of Andrei Kanchelskis, is the XI that has started the most games in Premier League history.

They played together 19 times in total.

Another United side of the Premier League era is arguably even more iconic and also more of a myth - the club's revered Treble winners of 1998-99, who remarkably started just one single league game together (a 1-0 win at Coventry on 20 February 1999) and two matches in total, the other being the Champions League quarter-final first-leg win over Inter Milan. 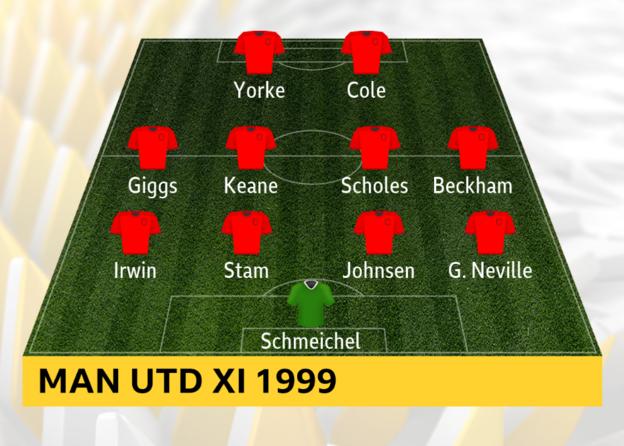 Injuries meant Giggs was in and out of the side that season, with Jesper Blomqvist his regular deputy, while the squad was replete with alternate talent in the likes of Phil Neville, Henning Berg, Nicky Butt, Teddy Sheringham and Ole Gunnar Solskjaer.

The Arsenal side that went a whole season unbeaten in 2003-04 is one of the most iconic of the Premier League era. 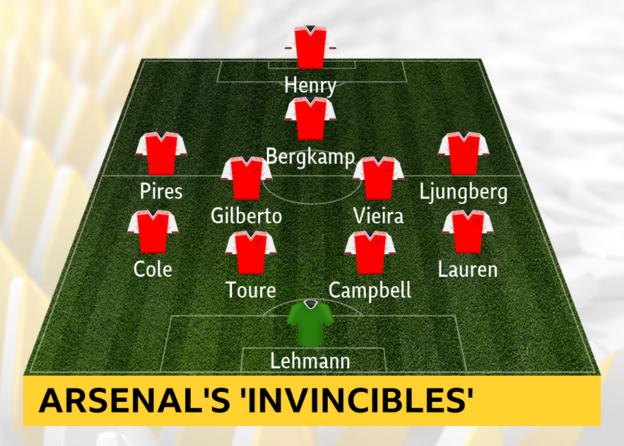 Would it surprise you to learn that this side started only two league games together for the Gunners?

The two matches in question give us just a small glimpse of the potency that side possessed - both wins, one to put a major rival to the sword, the other to seal that undefeated season.

It is easy to forget that Ray Parlour played a prominent role that season, starting 16 of their league games, as did Edu, who began 13 of them, while the likes of Sylvain Wiltord, Pascal Cygan and Jose Antonio Reyes chipped in.

The following season saw Gilberto Silva sidelined for seven months because of injury and the early rise to prominence of a young Cesc Fabregas.

It is harder to nail down iconic starting XIs the more recent you look, with managers increasingly rotating their sides to cope with the demands of the modern game.

Jose Mourinho had the luxury of a large, expensively assembled and talented squad at his disposal during his first spell at Chelsea, but this is the XI that probably springs to mind, particularly from that 95-point season in 2004-05. 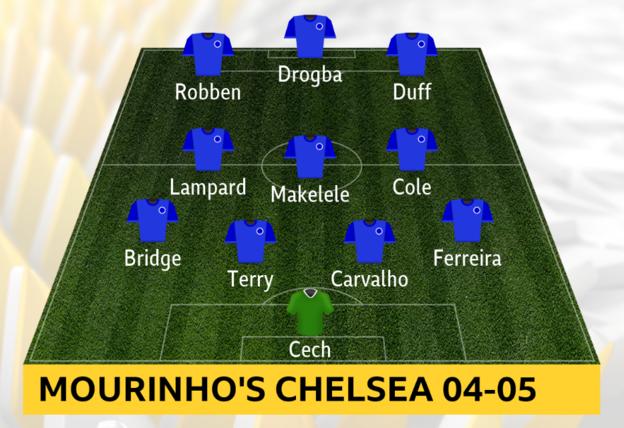 Well, this XI never started a competitive game together. You can replace Bridge with Gallas at left-back or fast-forward a year and bring Michael Essien into midfield and push Cole into Duff's spot and it still doesn't have a match under its belt.

Before you know it you are swapping in and out Eidar Gudjohnsen, Tiago, Alexei Smertin, Geremi and Mateja Kezman and only succeeding in making the side less and less iconic.

Only one side has amassed 100 points in a single Premier League season - Pep Guardiola's Manchester City of 2017-18.

Much like Chelsea under Mourinho, nailing down an iconic City XI for this season is tricky as a result of the rotation enabled by a vastly talented squad, with the added complication of a significant injury or two. But maybe this is the one that first springs to mind? 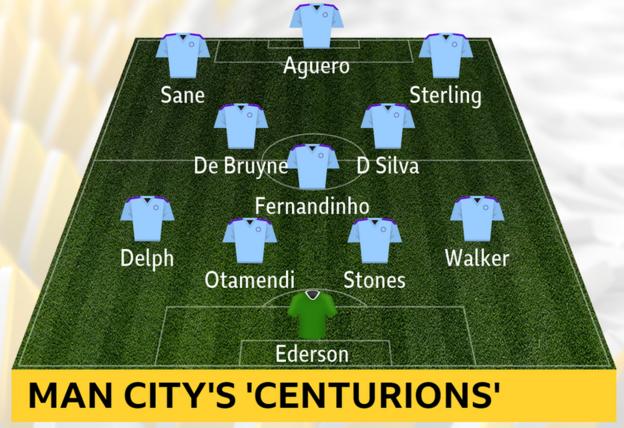 It is not ideal. Fabian Delph is included largely because he operated the most at left-back after Benjamin Mendy suffered a season-ending injury.

Even so, this XI started just three matches together, all of which City won, scoring three times in each (3-0 against Burnley and 3-1 each against Arsenal and Watford).

You may feel it necessary to get Vincent Kompany into this XI, but even with him replacing either of the two centre-backs, such an XI only started twice together.