Celtic are "taking nothing for granted" despite opening up a 10-point Scottish Premiership lead over Rangers, says manager Neil Lennon.

The champions - who have played a game more - thrashed Hearts, while Steven Gerrard's men lost at Kilmarnock.

Celtic's 17th win in 18 games puts them on course for their ninth successive title, but Lennon wants his team to keep a level head.

"It might give them a bit of confidence but that's about it," he said.

"We have a tough game on Sunday [against Aberdeen] at Pittodrie. We are taking absolutely nothing for granted. The players know there is a long way to go and there will be twist and turns as we go along."

Olivier Ntcham gave Celtic the lead after half an hour, before second-half efforts by Christopher Jullien, Callum McGregor, Ryan Christie and Jozo Simunovic completed the rout.

It was Celtic's eighth consecutive win since the winter break and also stretches their goal difference advantage over their city rivals.

"They were magnificent tonight," Lennon added. "Their desire, hunger to play, score goals, run; everything you want from a team I got tonight. It was an emphatic victory.

"It's just another game ticked off. There's still a long way to go. It gives us a bit more of a margin but things can flip at any time. I'm just delighted with our performances at the moment." 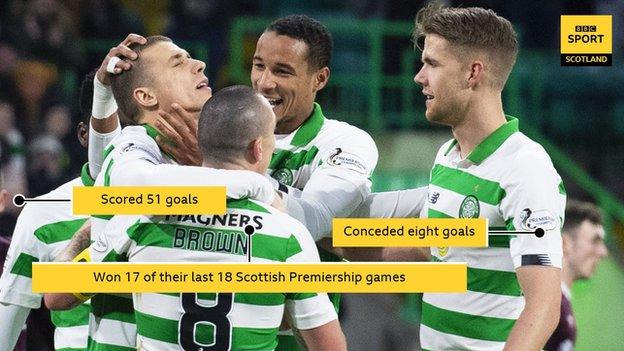